It's Monday, June 25. Armed with neck pillows, compression socks and loads of coffee, we are ready for our flight to Paris! Les Étés de la Danse, a French festival held at the beautiful La Seine Musicale theater, invited Pacific Northwest Ballet for its 2018 season. Half of the company will arrive the first week to participate in its Hommage à Jerome Robbins celebration with a handful of other companies. The rest will join the second week for a PNB-only residency. 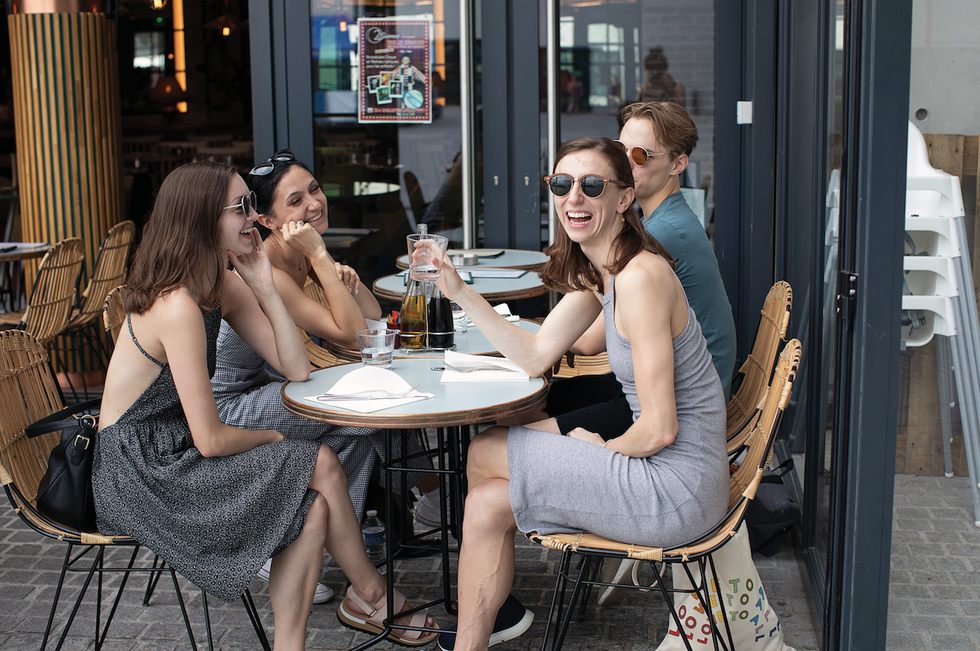 When my husband (PNB soloist) Price Suddarth and I arrived at the hotel, our room was a couple hours from ready. Our first instinct was coffee. After about 30 minutes of wandering, we selected a café—one of many with red awnings. Luckily, espresso was one word on the French menu that I knew! Two double espressos in, we knew Paris was going to treat us well. 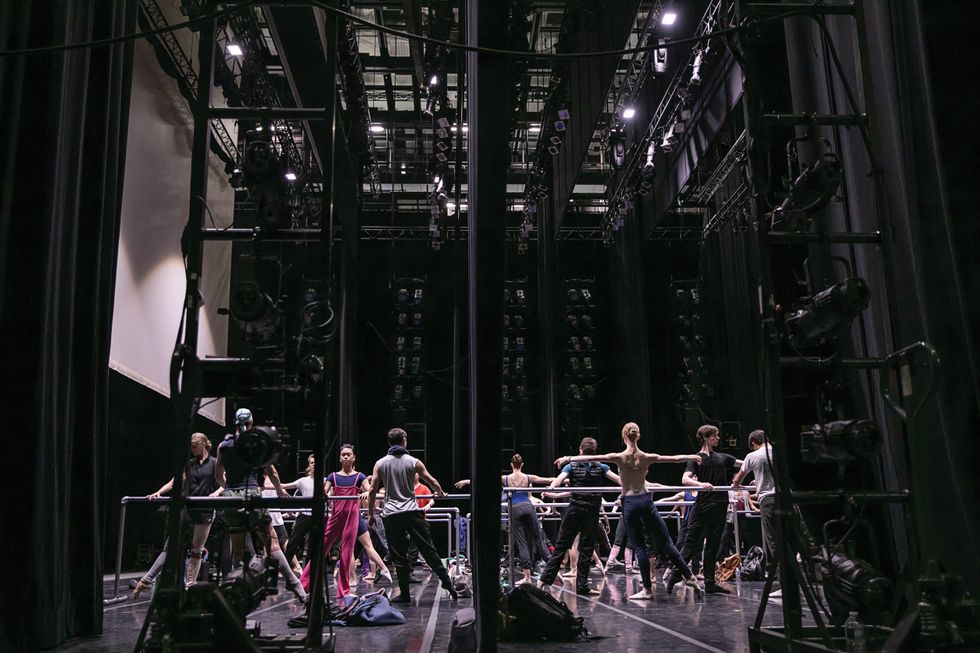 We had the rest of the day off, so after class we all headed off in various directions for shopping, cafés, museums, walks along the Seine. You have to pack it in when you only have one day to sightsee! Corps member Cecelia Iliesiu, Price and I visited Notre Dame, Sainte-Chapelle and the entrance of the Louvre; purchased macarons from Pierre Hermé; and finished off with a serious crêpe hunt. 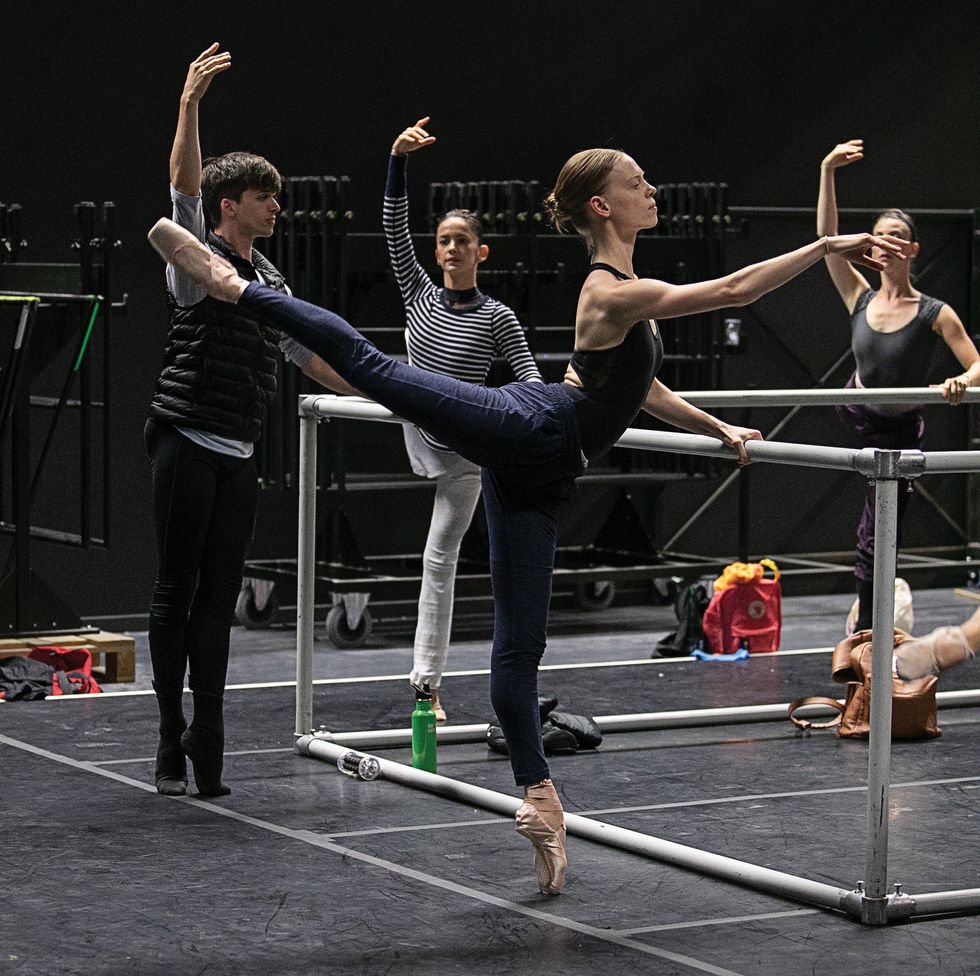 Our stage manager, Sandy Barrack, had us turn in shoes for the tour back in April—two and a half months in advance. However, when I opened our shoe cabinet backstage and saw all my perfectly broken-in pairs of flesh, pink and matte pointe shoes, it felt like Christmas. That's not all she shipped ahead. Rosin boxes, pointe shoe scrapers, first aid supplies, candies for that emergency sugar rush and even four varieties of Altoids made the trip!

It's already opening night. For the Robbins celebration, PNB is dancing Opus 19/The Dreamer, sharing a program with MCB and Perm Opera Ballet Theatre. The number of languages backstage alone is mind-blowing! I could hear dancers from Perm casually chatting in Russian, two MCB dancers discussing a lift in Spanish, the stage crew watching the football match in French and my own co-workers talking about the afternoon's rehearsal in English. The language of dance brought us all together as a much larger, global team—a rare and special happening to be a part of. 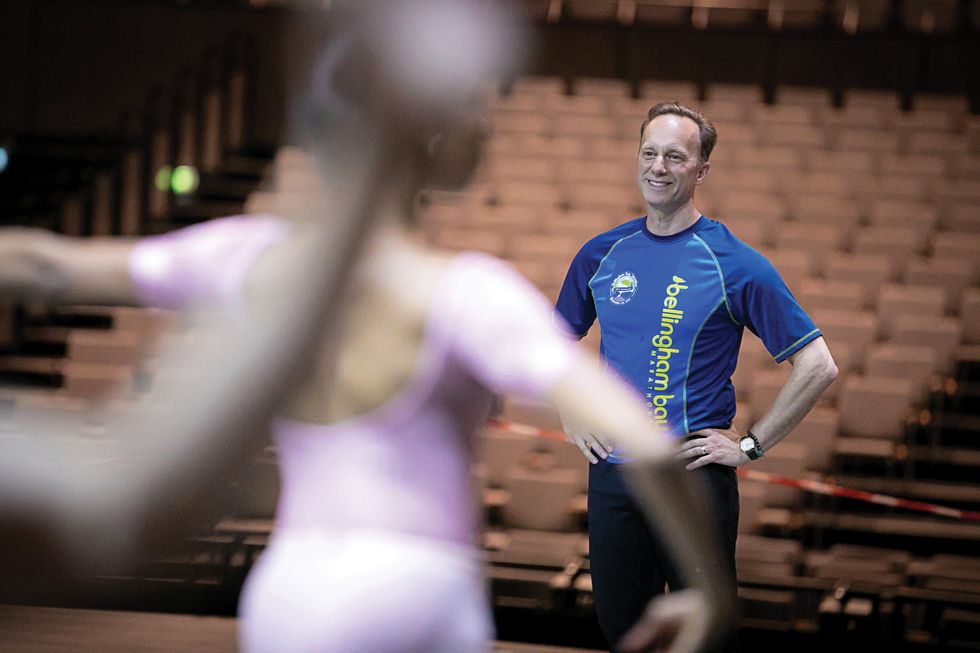 So many funny things happened backstage this week. For instance, the PNB men managed to burn up three hair dryers from improper voltage conversion. And there was more than one incident of a stuck elevator, causing many to opt for the stairs. Climbing a few flights outweighed the risk of getting stuck on level 2 and missing your entrance!

The Robbins festival performances went off beautifully. I loved watching the Perm dancers, who have such different dance backgrounds than ours in the U.S., put their own touch on Robbins. 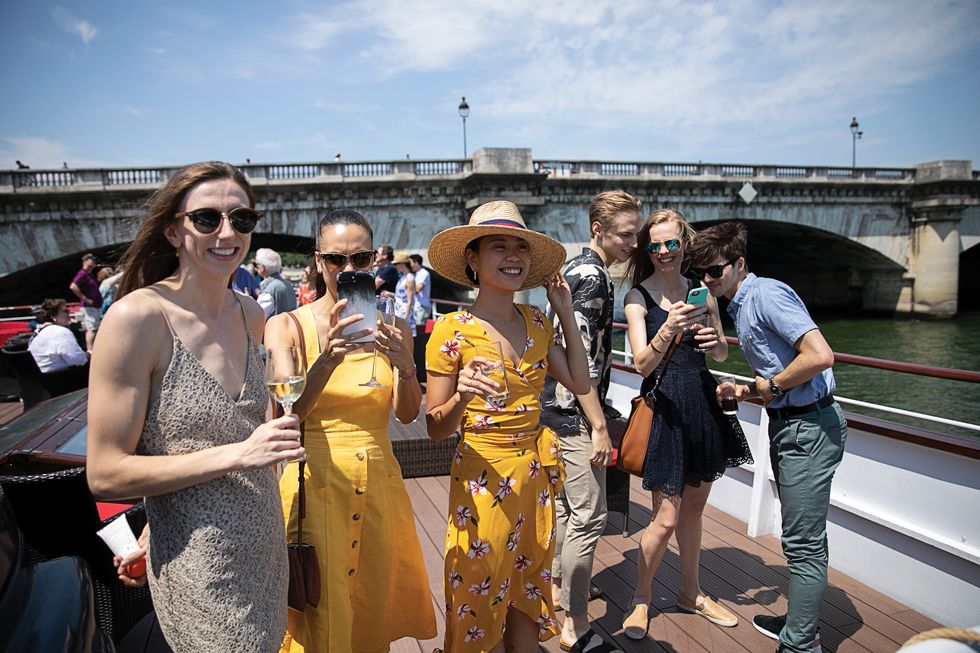 Company members enjoy a boat cruise along the Seine on their day off. Photo by Lindsay Thomas.

The rest of the company arrived yesterday, just as we were finishing up the Robbins performances. In all, there are 44 dancers, two physical therapists, marketing and executive staff members, our incomparable crew and wardrobe team, a music team (conductor, pianists and violin soloist), three ballet masters and one artistic director. Today, dancers and staff took a beautiful boat cruise along the Seine with patrons of both PNB and La Seine Musicale. PNB takes Paris! 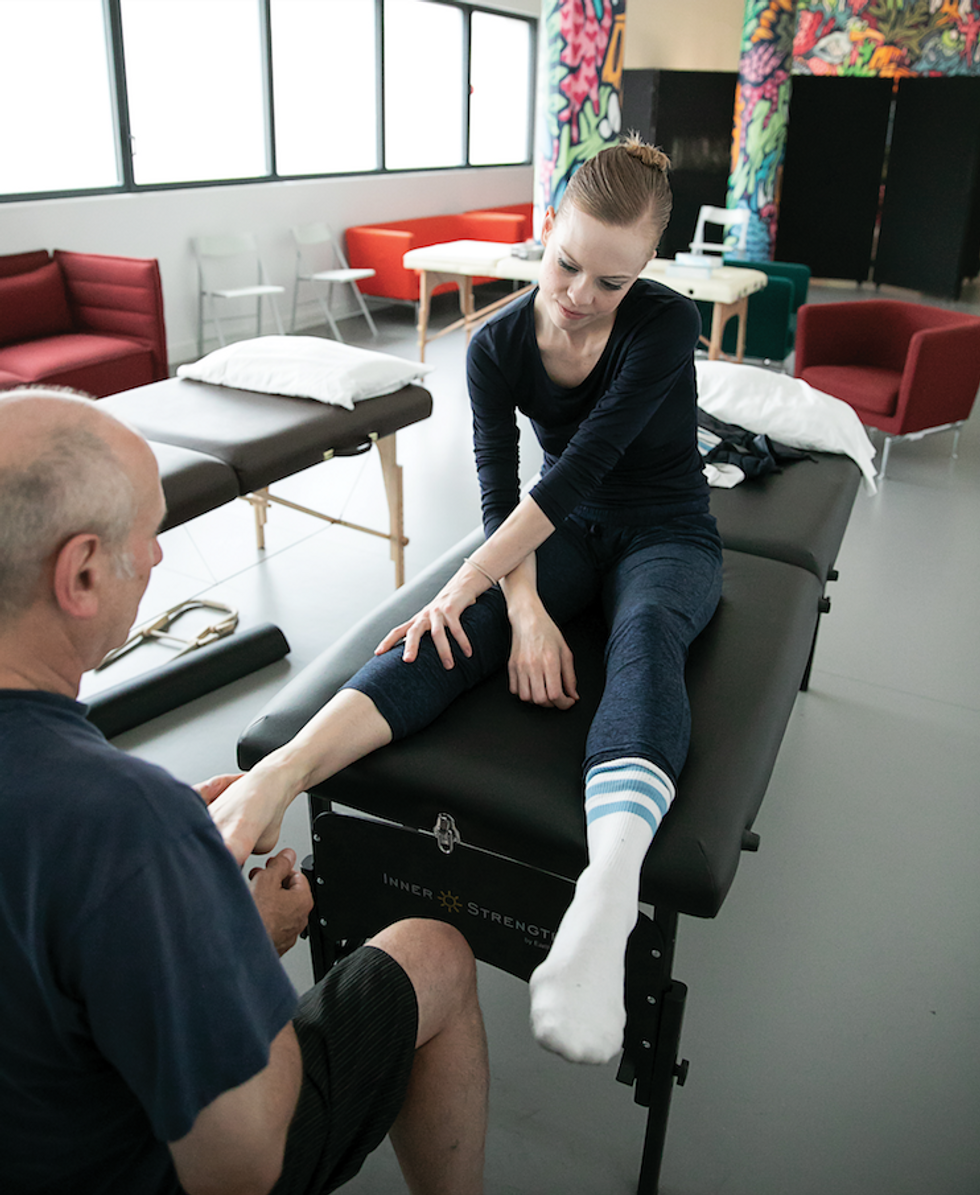 Love Suddarth gets physical therapy on a troublesome ankle. Photo by Lindsay Thomas.

Back to work. We have one day to make sure eight ballets, most with multiple casts, are ready to go. Some works, like Crystal Pite's Emergence, transition easily to La Seine Musicale's stage. Others, like Alejandro Cerrudo's Little mortal jump, require extra thought. One dancer leaps into the orchestra pit and has very little time to get back onstage. The combination of socks and slippery cement floors presented a dilemma during rehearsal. The solution: pre-setting sneakers in the pit for an Olympic-style sprint to the stage.

I made a visit to our physical therapist, Boyd Bender. An ankle sprain from earlier in the season requires regular maintenance. Also, for whatever reason, I couldn't tilt my head right. He figured it out, as he always does. 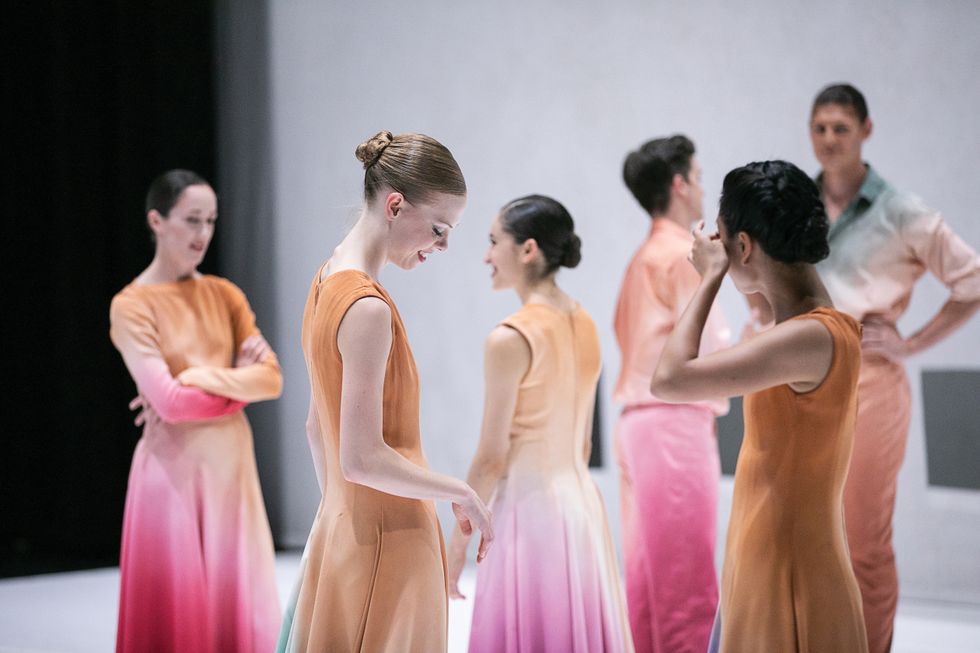 It's PNB's opening night, and you wouldn't have known anyone was tired. The program—Christopher Wheeldon's Tide Harmonic, Ulysses Dove's Red Angels, Little mortal jump and Emergence—showcased the best of PNB. We're accustomed to a slightly rowdier Seattle audience, but when the show finished, the Parisians, clapping enthusiastically in unison, demanded another curtain call. A company-wide sense of pride was felt by all. 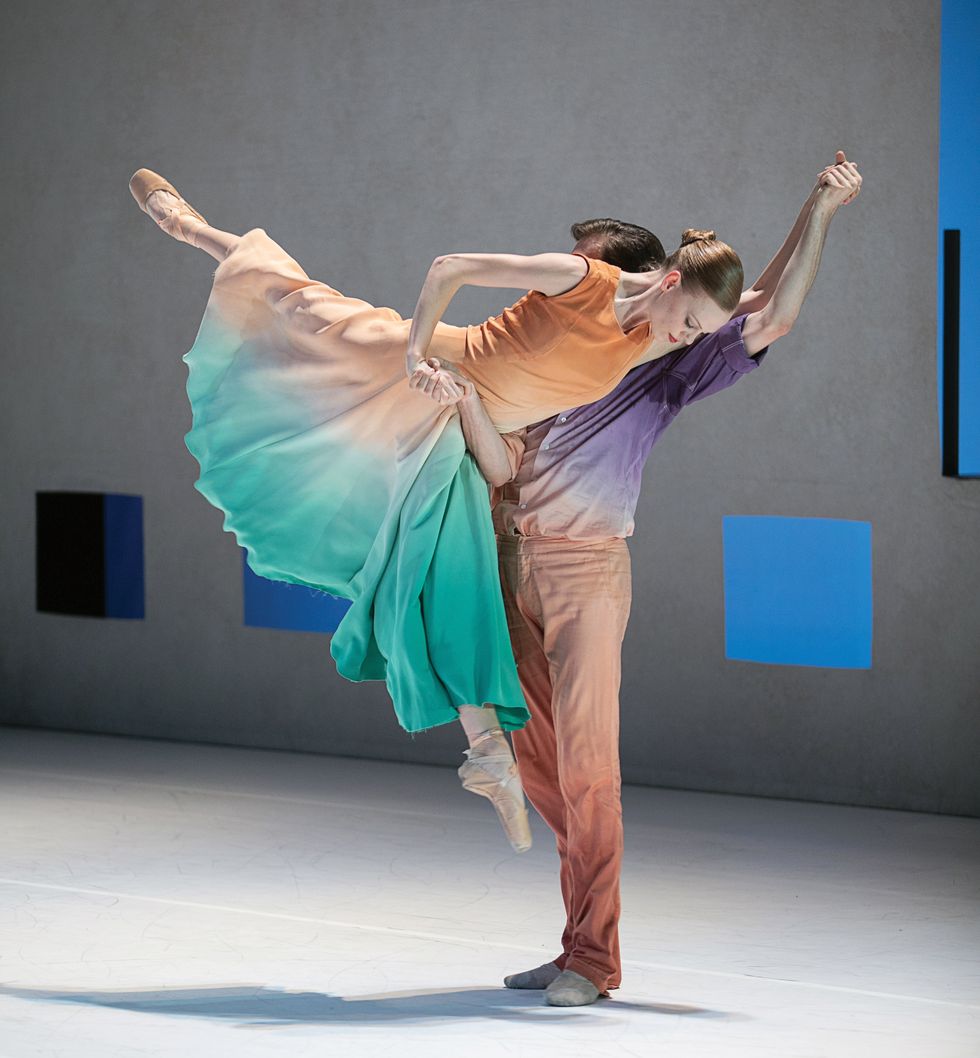 Rehearsing Jessica Lang's Her Door to the Sky. Photo by Lindsay Thomas.

We realized too late that we should have learned more than "hello," "good-bye," "thank you" and numbers up to 10 in French. At one point today, we had to explain to a pharmacist via hand gestures that we needed nasal spray. (Apparently, Paris and Seattle have similar effects on allergy sufferers.) It led to a few laughs from both sides of the counter. 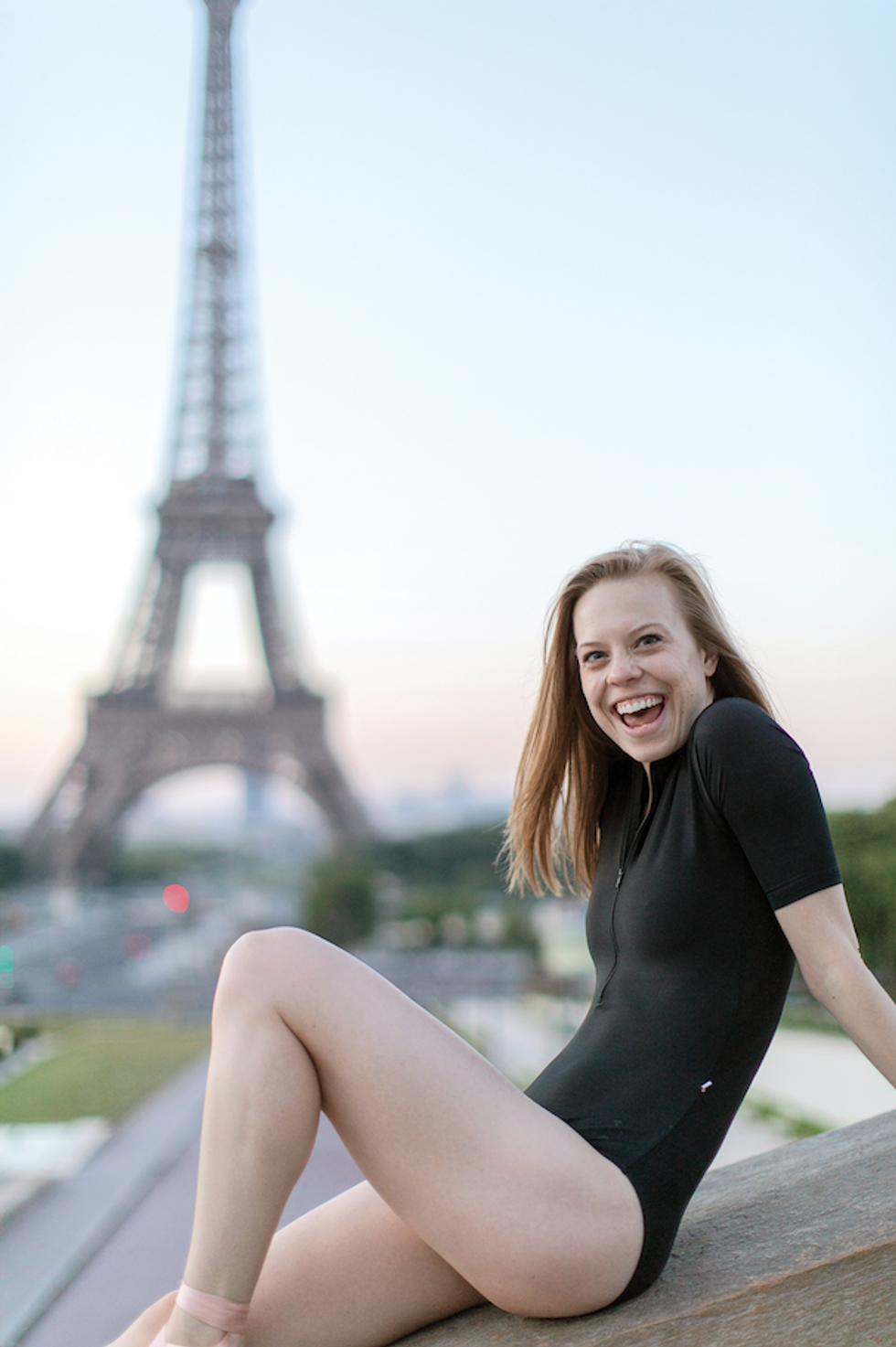 The last day on tour feels like it will never come, and then it's over before you know it. We'll all miss the amazing hotel breakfasts—croissants, muesli, any-way-you-want-them eggs, quiche, roasted tomatoes, pancakes, fresh vegetables, smoked salmon, unlimited trips to the espresso machine. At the same time, everyone is ready for a little rest and relaxation. We're officially on summer break, so many of us are taking the opportunity to travel around Europe.

From the outside, touring can seem insurmountable—tech rehearsal, dress rehearsal and performance all in the same day; unfamiliar stages with unfamiliar floors; not being able to identify what you're ordering on a dinner menu. But none of that can detract from the opportunity to share all that PNB has to offer across the pond, and the chance to add our voice to the global conversation of dance.