The Breakthrough: Behind-the-Scenes with ABT's Katherine Williams as She Takes On Her First Principal Role

Katherine Williams as Myrtha. Photo by Quinn Wharton for Pointe.

With a large exhale, Katherine Williams steps into a series of arabesque chugs, as if the force of her breath is propelling her forward. "Big step out, big," coaxes ballet mistress Irina Kolpakova, watching from the front of a small studio at American Ballet Theatre in May. It's a big step indeed for Williams—after 10 years in the corps de ballet, the 29-year-old is preparing for her debut as Myrtha in ABT's production of Giselle, her very first principal role. One month after the premiere, Williams was promoted to soloist.

"Myrtha is the hardest thing I've ever done," Williams admits. "By the end you feel like you're going to throw up. I was using my breath as much as I could to help me get through it."

While Williams is tall and a natural jumper, she was surprised when artistic director Kevin McKenzie cast her in such a fierce and powerful role. "Generally they give me the happy peasant girl, something softer," she says. "I think it was a leap of faith for Kevin to allow me to embrace a totally different side of myself."

Ballet mistress Nancy Raffa admits that Williams' narrow, delicate physique made her a less-than-obvious choice. "Right off the bat we talked about ways to expand her movement range," says Raffa, who worked intensely with Williams on the part. "Plus, after being in the corps for so long, you train yourself to conform to being unified with other people, not breaking out and finding your own voice within the choreography. That was Katie's biggest challenge."

For the first two weeks of rehearsal, Raffa coached her section by section to help her understand the role and how much larger and freer her movement needed to be. "Then we started to color things—where to speed up, slow down, bend more, breathe, where to focus the eyes—before finally putting everything together to build stamina," says Raffa.

Throughout the process, Williams approached rehearsals calmly and professionally. "It's easy after a certain number of years in the corps to become bitter or lose hope, but Katie never gave up," says Raffa. "All her hopes and dreams are starting to become a reality." 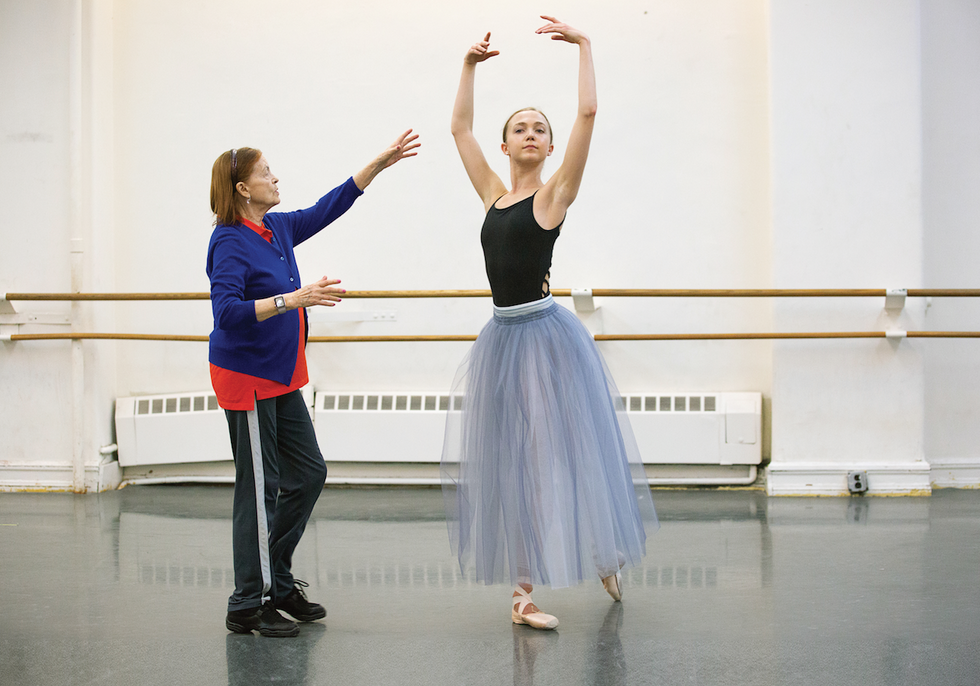 Ballet mistress Irina Kolpakova directs Williams to stand slightly forward on her leg. "Irina is such a legend," says Wiliams. "I tried to soak in every correction."