Company class is a little more exciting these days at Pacific Northwest Ballet. Look over in the corner of the studio and it's obvious why—Wendy Whelan is here. Dressed in a vest, with her pants tucked into her socks, one might almost forget that her name is virtually synonymous with the term ballet. But watch her do a devéloppé and you instantly remember. Her collection of accomplishments is extensive—classical ballerina, freelance artist, inspirational teacher, or even, as of late, documentary film star. But now, she's adding another new hat: ballet stager.

Whelan's here to stage Alexei Ratmansky's Pictures at an Exhibition. Ratmansky created it for New York City Ballet just before her retirement in 2014, and she was a member of the original cast. Spotting her relaxing on a couch over the lunch hour, I ran over to see if she'd be up for answering some questions on the experience, to which I received an enthusiastic "Absolutely!" I asked what her initial reaction was when PNB artistic director Peter Boal and Ratmansky approached her. "I was petrified," Whelan explains. "Honored, but petrified." As an individual who has garnered infinite respect from every part of the ballet world, Wendy Whelan still gets nervous.

She dealt with the unfamiliar as she does with everything she takes on: "I'm going to immerse myself completely in it—and that's what I did." First, she chose a single performance video to focus on in order to build a cohesive foundation. Over time, with different dancers, different stagers and different ideas of the specifics, ballets morph (just look at how many different versions of Serenade or Apollo there are). Also, knowing Ratmansky would work with the PNB dancers after her initial staging trip, she "wanted to give him a really solid structure to play with." 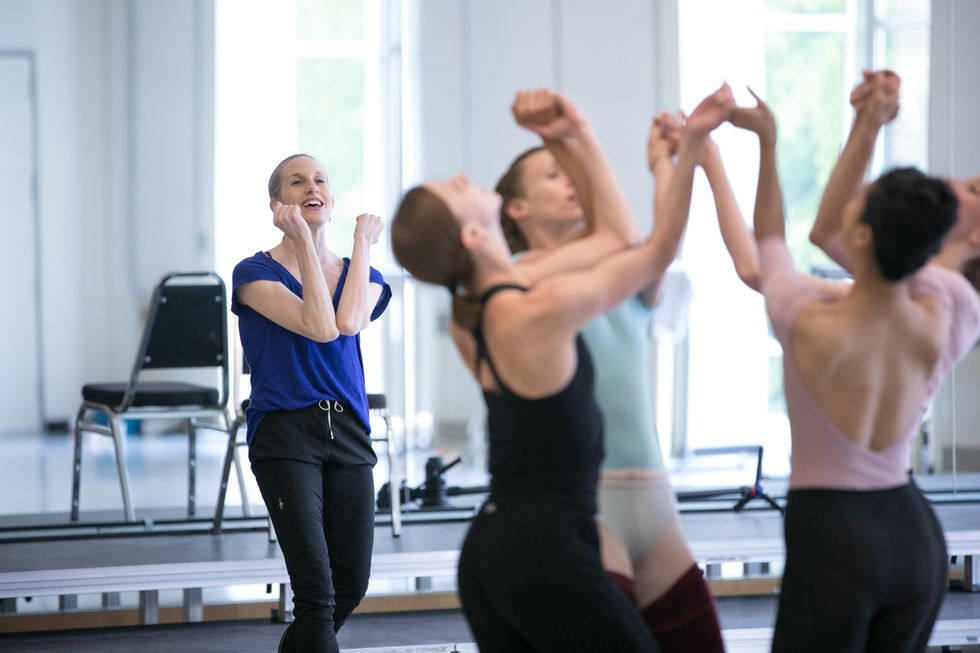 This task, however, was not easy. As PNB soloist Sarah Orza explains, "unlike many ballets, Pictures at an Exhibition is an ensemble piece made up of soloists, who are on stage together, but often dancing their own unique steps, in their own unique patterns." Whelan dreaded the patterns the most. "Knowing the patterns of things was hard for me to see," she says. "Counts are one thing, but how you relate in a group?" She groaned.

However, no one would have had any idea in the studio."Wendy coded each dancer by a color and mapped out each dancers' steps and counts, as well as their patterns," says Orza. "Because she came into the studio so well prepared, she was able to teach the entire ballet in about three days—an incredible feat." When asked how she was able to accomplish it so smoothly and quickly, Whelan credits NYCB principal and fellow original cast member Adrian Danchig-Waring, who had worked alongside her in studio for the first couple days. She also commended the dancers: "My ego wasn't in it—I thought it could be a collaboration of knowing and figuring it out together."

With an infectious laugh and plentiful supply of helpful tidbits, Whelan sent the dancers out of the studio at the end of each day exhausted, but enthusiastic. "She's a natural leader," says Orza. Whelan is back in town for opening night, and is eager to cheer on not only Pictures, but the other two ballets on the program as well—Jerome Robbins' Opus 19, the Dreamer (a ballet she famously shared with PNB director Peter Boal), and Balanchine's La Source. One can spot her during rehearsal for any of the three, in the audience or on the corner of the stage, grinning—ready to share valuable hints or enthusiastic support. "Dance is so ephemeral—it's here and then it's gone," she says. "It's here for you right now. Take this on. You own it." Take it from one who knows.