It's rare to find three siblings who wind up in the same career. But Nicole, Claire and Emma Von Enck prove that it's not only possible, but that it comes with major benefits. Nicole, 28, is a member of Texas Ballet Theater, while Claire, 26, and Emma, 22, are in the corps de ballet of New York City Ballet. Over time, the three sisters' shared passion has only brought them closer together; today they consider themselves each other's biggest cheerleaders.

Originally from Cleveland, Ohio, the Von Encks stumbled into ballet. "I was a very active child, but my mom decided to try to take me to see The Nutcracker at age 3, and I sat through the whole thing," says Nicole. "My mom realized I might actually be interested, so when I was 5 she put me in dance lessons, and I took to it like a fish to water." Claire joined a year later, while Emma waited her turn. "I remember really wanting to go," says Emma. Though their parents weren't familiar with dance to start, they supported their daughters' interest, and over time helped them shift to more prestigious schools. "I don't know if they ever anticipated us all becoming professional dancers, especially in the beginning, but they did want us to focus on one thing," says Claire. 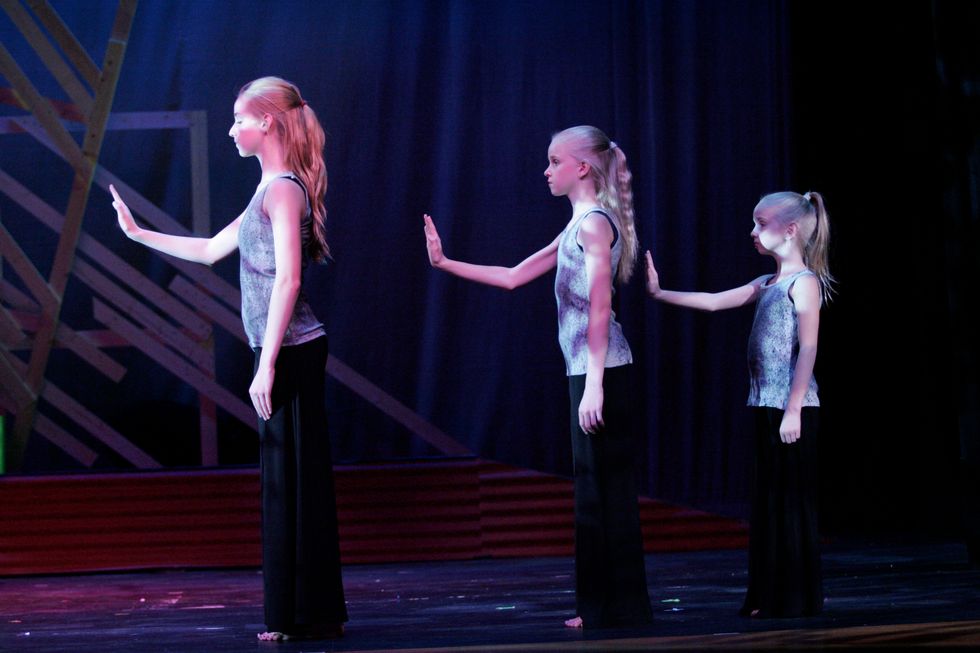 From left: Nicole, Claire and Emma Von Enck onstage together as children.

While Nicole and Claire regularly took extra classes together, the age gaps between the three sisters meant that they were usually in different levels. But they took every opportunity to watch each other dance. "We'd constantly be giving each other corrections and feedback, and helping each other," says Nicole. "It always felt like a team effort." And the girls had ample time to dance together at home; their parents built them a small stage in their basement, which allowed them to polish their budding performance chops. Already a built-in pas de trois, the sisters would invite over a friend to help them put on versions of The Nutcracker. "We did it probably every other week," says Nicole. "Each person would get a different part each time. Our parents watched us do The Nutcracker a lot," she adds, laughing.

In 2008, the ballet school the Von Encks went to in Cleveland closed, and Nicole left home for an apprenticeship at North Carolina Dance Theatre (now Charlotte Ballet). Claire and Emma started training under Gladisa Guadalupe at The School of Cleveland Ballet, and Guadalupe urged Claire to audition for the School of American Ballet's summer course. A year later, Claire moved to New York City to attend the school year round, while back in Ohio, Emma's commitment to ballet wavered. "It was the first time I didn't have a sibling to go to ballet with, and I quit for a couple of months," says Emma. After dutifully following in her sisters' footsteps for so many years, she had to find her own sense of motivation. "I wondered if I should find something that's more unique to me, but eventually I realized I really wanted to do ballet," she says, adding that she learned to take ownership of her passion. 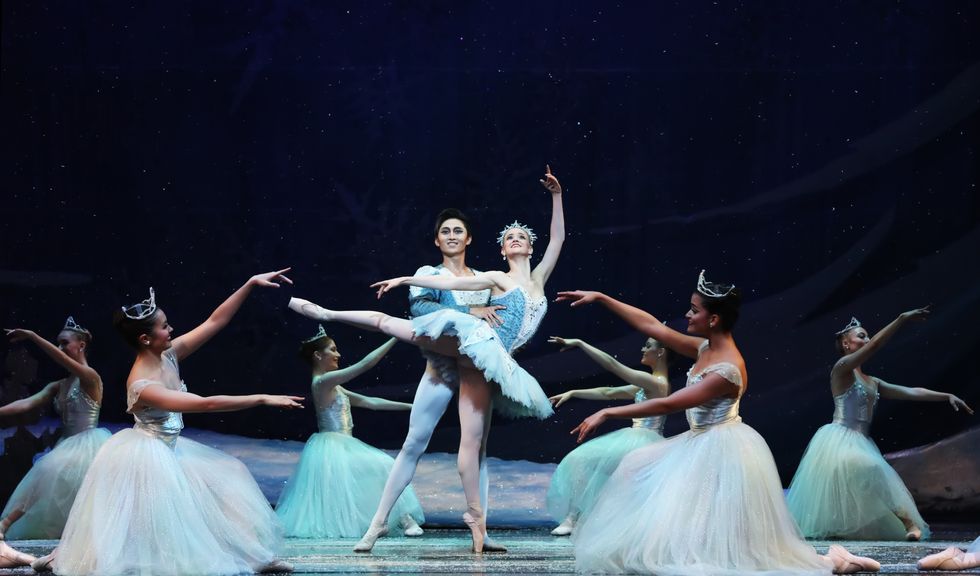 Nicole as the Snow Queen in The Nutcracker with Jiyan Dai.

Four years later, Emma's commitment paid off, and she joined Claire in New York to train at SAB. Nicole was going into her second year at Texas Ballet Theater, and Claire had just joined NYCB as an apprentice. "I didn't give them too much advice, because every company is so different, but I did offer emotional support," says Nicole. "Joining a company is so different than training, and how you're feeling totally affects your dancing." Emma and Claire moved in together; today, the sisters still share an apartment. "It was so helpful to have an older sibling who had gone through SAB," says Emma of those early years. "There were things she'd have tips on, and if I came home and talked about a certain teacher she'd know all the same people."

Today, Claire and Emma are colleagues as well as roommates and sisters. While one might imagine that competition plays a role in their relationship, they're quick to state that they're very different dancers. "Emma is more of a sharp and energetic dancer, while I'm more of a lyrical kind of slow dancer," says Claire. "She can also float through crazy turns," adds Emma. "And for the record, she has very good hops on pointe; I'm in awe." While the sisters are usually cast in different ballets, they have shared a few moments together onstage. "There's a small part of Tschaikovsky Piano Concerto No. 2 where we both run around the principal at the same time, and everyone just laughs to themselves because it's totally by chance," says Emma. 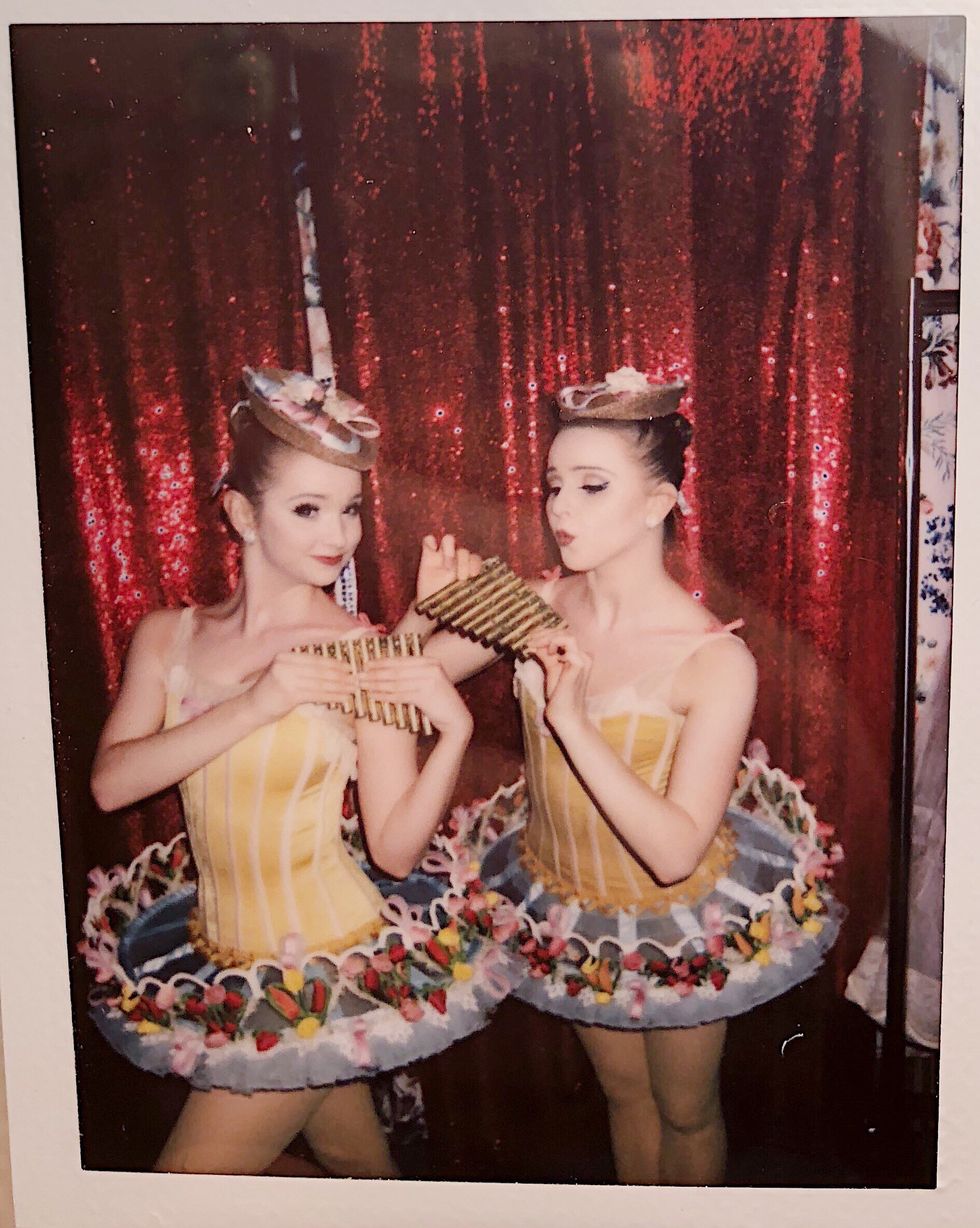 While Nicole doesn't regret that her ballet journey took her down a different path than her sisters, she does wish that they all still got to dance together. But of course, the language of ballet is universal. "It's so fun when Nicole's company does Balanchine pieces," says Claire. "We get to talk about the exact choreography." Nicole and her husband, fellow TBT dancer Joamanuel Velazquez, are expecting a baby this winter, which makes the distance between her and her sisters even harder. "I do wish I lived closer," she says. "Maybe not in the same apartment, but still," she jokes. But the sisters Facetime regularly, and prioritize visiting each other during their layoff periods.

As the Von Enck sisters grow further into adulthood, they are grateful that ballet has kept them so close. "I can relate to them on such a deep level," says Nicole. "We get to be each other's number-one fan, and that type of encouragement and support is invaluable." All three sisters voice the importance of appreciating each other. "Sometimes there are a million things going on, but just standing in the wings and watching Claire, even when it's Nutcracker and I've seen it a million times, it's such a unique experience," says Emma. "It's such a close connection, and it's important to cherish that."