This is Pointe's April/May 2016 Cover Story. You can subscribe to the magazine here, or click here to purchase this issue.

After Pennsylvania Ballet's Mayara Pineiro and Arian Molina Soca run their Nutcracker pas de deux in rehearsal, ballet master Charles Askegard asks for just one correction. Pineiro—who is thrilling as she plunges headlong into penché, whips into crisp turns and hurls herself backward into Soca's arms—is asked to emphasize taffy-like stretches into lengthened holds. Askegard is right. Counterbalancing the lightning-quick and the sensual brings even more dimension to this riveting dancer.

In just her second season with Pennsylvania Ballet, where she started in the corps, the Cuban-born Pineiro has danced leading roles in Balanchine's Allegro Brillante and Matthew Neenan's Shift to Minor. Elevated to soloist in March 2015 following her performance as Odette/Odile in Swan Lake, she continues to be given choice principal roles.

“It was like fire onstage," says Pennsylvania Ballet artistic director Angel Corella of her performance in Allegro Brillante. “She's one of those dancers that comes only every once in a while." The path leading to this moment was long and challenging, including Pineiro's rigorous training in Havana, her brave defection to the U.S. and a period of uncertainty about whether she could continue dancing at all. Now, she has landed right where she wants to be. 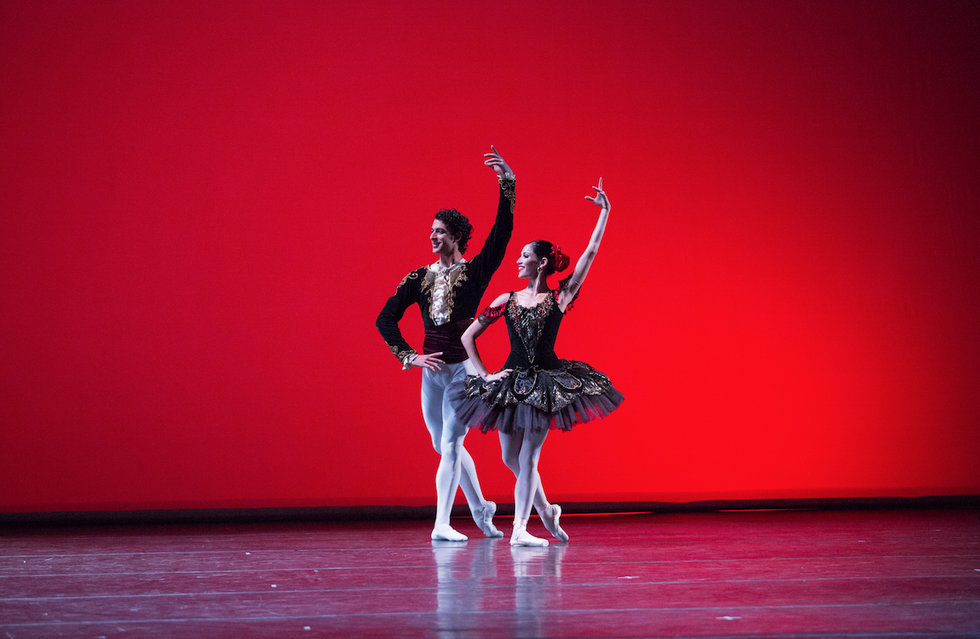 Director's Notes: A Sense of Camaraderie

At eye level by Roy Kaiser’s desk is a photo of Philadelphia’s PECO skyscraper with the message “Save the Ballet” in lights. The picture is from 1991, when Pennsylvania Ballet was facing a financial meltdown. After 32 years with PA Ballet and 17 as its artistic director, Kaiser never wants to forget that time and how the Philadelphia community rallied behind the company. “They knew what it means to the culture here to have a major ballet company,” he says. “There were cab drivers pulling up in front of the theater putting in five dollars, kids collecting money and bringing it in.”

Today’s picture is far brighter, an indication of the distance PA Ballet has come under Kaiser’s leadership. Plans are afoot for a 50th-anniversary celebration next season. A new building is under construction. And this fall will see the reopening of a company school.

Kaiser began dancing with PA Ballet in 1979. He trained in its school and then made his way up to principal, eventually becoming ballet master and ultimately taking the company’s helm in 1995. A lot of the qualities of the original troupe are still evident today. “It’s one of the things I’m really proud of,” he says. Founded by Balanchine protégé Barbara Weisberger in 1963, PA Ballet maintains its Balanchine roots while embracing the young lions of contemporary ballet. Weisberger considered research and development crucial, planting the seeds for Kaiser’s pattern of mounting diverse new ballets.

Unlike many directors, Kaiser doesn’t create dances himself. “When I took over,” he says, “there were so many challenges that, even if I fancied myself a choreographer, I would not have choreographed.” Instead, he steadily commissions new work. Among those who have made premieres for PA Ballet are Merce Cunningham, Benjamin Millepied, Dwight Rhoden and Christopher Wheeldon, as well as resident choreographer Matthew Neenan, who came through PA Ballet as a dancer and has developed a following in Philadelphia.

Kaiser’s most recent coup was arranging for PA Ballet to be the first company outside of the Bolshoi to perform Alexei Ratmansky’s Jeu de Cartes. The result, coached largely by Ratmansky’s wife, Tatiana, was spectacular. “Before we started, Alexei sent me this wonderful long e-mail talking about each dancer Jeu was created on: personality traits, things they needed to do,” says Kaiser. “It was fun to ask: ‘Who do we have here who might fit that role?’ ”

Generally preferring “dancers who are very musical, athletic and aggressive,” Kaiser nonetheless maintains there is no uniform PA Ballet type. He characterizes the 37-member company as “a very eclectic group of dancers.” At the same time, ensemble is prized. Comparing his company’s renderings of Balanchine ballets with those of other companies, he notes, “I think it’s different here because there’s a sense that ‘We’re all in it together and we’re all equal partners in creating this experience on the stage.’ ”

Although there is a ranking system, Kaiser doesn’t always stick to it. “If somebody is appropriate for a specific role, I’ll cast them,” he says. That explains how Jong Suk Park, a newly arrived Korean dancer, landed the Cavalier in this season’s Nutcrackereven though he is in the corps. And how Odette/Odile was danced last season by Lauren Fadeley, then a corps member, and Brooke Moore, a soloist.

Kaiser wants individuals to shine in roles well-suited to their gifts. It’s an environment the dancers feel they can grow in, something that certainly contributes to the company’s high retention rates. Dancers often stay with the troupe for their entire career, and sometimes graduate to other roles within the institution. Kaiser encourages them to develop their offstage talents as well. Recently retired principal Alexander Iziliaev became the company’s official photographer and videographer. And current principal Julie Diana, a committed writer, has contributed several essays to the company’s Playbills.

Diana, who previously danced with San Francisco Ballet, feels that PA Ballet’s modest size gives her greater opportunity to develop as a dancer. “We’re smaller than SFB or NYCB or ABT, so even though we’re dancing some of the same rep, we get to dance more,” she says. “We get to do more roles and experience them more fully.” The performers dance in a larger percentage of the performances, and the company tries to commit as much rehearsal time as possible to developing any ballet it’s working on.

While Kaiser is making plans for future additions to the repertoire, recently he’s also been preoccupied with the company’s efforts to raise $17.5 million for its new purpose-built home on North Broad Street. This facility will bring all of the company’s operations back under one roof after several years in temporary quarters. Kaiser’s especially thrilled about being able to re-establish the School of Pennsylvania Ballet, which suspended operations several years ago and is set to open again this fall. William DeGregory, a former company principal and the current director of PA Ballet II, will direct the school, and Arantxa Ochoa, a current principal, will be tapped as head instructor.

With a school again connected to the company, benefits will include a more steady community presence, expansion of outreach efforts and the potential to train and take into the company a more diverse group of dancers. All this serves Kaiser’s vision of making ballet more accessible for audiences. What could be better as PA Ballet looks forward to its next 50 years?

Weeks on Tour: One. The company performed Nutcracker in Ottawa this season. In recent years, PA Ballet has toured to the Edinburgh International Festival, the Kennedy Center and New York City Center.