While most ballet casts are 100 percent human, it's not unheard of for live animals to appear onstage, providing everything from stage dressing to supporting roles. Michael Messerer's production of Don Quixote features a horse and a donkey; American Ballet Theatre's Giselle calls for two Russian wolfhounds; and Sir Frederick Ashton's La Fille Mal Gardee requires a white Shetland pony. Another Ashton masterpiece, The Two Pigeons, is well known for its animal actors. But though ballet is a highly disciplined, carefully choreographed art form, some performers are naturally more prone to flights of fancy—because they're birds. 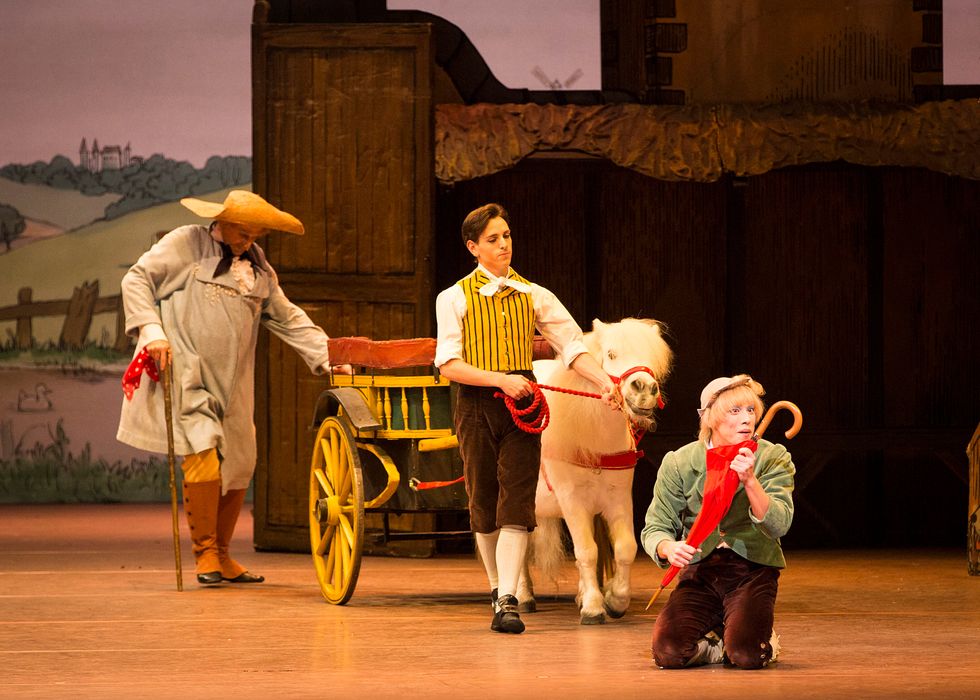 On opening night of The Royal Ballet's run of The Two Pigeons earlier this year, one of the pigeons made a beeline for the orchestra pit. The female pigeon, whose name is Mole, was supposed to land on soloist Reece Clarke's hand after his adagio solo and stay there until he left the stage. Clarke, in the lead role of the Young Man, said he wasn't sure if his grip was too tight, if the bird became nervous, or if the ropes he wore around his hands and waist during the scene scared the bird off. "I just had a brief moment of panic, and then it was almost like a nice moment," says Clarke. "Like I was setting the pigeon free. And I just had to pretend like that was supposed to happen." Two trainers had to go to the orchestra pit while the orchestra was still playing to retrieve her. "They said the pigeon was sitting at the conductor's podium," says Clarke.

The eponymous pigeons in Sir Frederick Ashton's work represent the relationship between the Young Man and the Young Girl. The Young Man becomes bored of his lover, the Young Girl, and abandons her for a gypsy woman. He is, in turn, spurned by the gypsy woman, kicked out of her camp, and returns, contrite, to his girlfriend. Similarly, the pigeons first appear as a pair, become separated and are then reunited onstage at the end of the show.

The key to working with live animals is to spend time with them beforehand and build a rapport, explains Emma Hills of the UK-based company Amazing Animals, which trains and supplies animals for the media. Hills, who is in charge of birds and small mammals, has been the Royal Ballet's go-to pigeon trainer for about 13 years. The pigeons she currently uses have done the show for nearly 10 years.

Clarke spent two rehearsals getting to know his pigeon partners before the latest production opened. "When I was first introduced to the pigeons, I'm not going to lie, I was pretty nervous," he says. However, Clark explains that he felt much more confident after practicing with the pigeons, even though one went to the toilet on his shoulder and kept squirming from shoulder to shoulder. Hence Hill's other piece of advice: Stay calm if things don't go according to plan. Give the pigeons a chance to adjust and correct themselves.

According to scientific research, pigeons are pretty smart animals. Studies suggest that pigeons factor probability into their decision making process, can be trained to recognize certain words, and have self-cognitive abilities beyond that of three-year-old children.

Hills' feathered performers, white Fantail Pigeons, were chosen as chicks and raised by humans to perform certain natural and reinforced behaviors. When two pigeons fly in sync across the backdrop of the stage, Hills is tapping into their innate flocking tendencies, since there's a third bird just offstage that the two pigeons fly to, which Hills refers to as "the decoy." She keeps five pigeons on hand during performances, including two "hero pigeons" that do most of the heavy-lifting on any given night. Once the ballet starts, the pigeons are kept in a cordoned off area backstage with their own private light, to keep them from falling asleep in the dark. 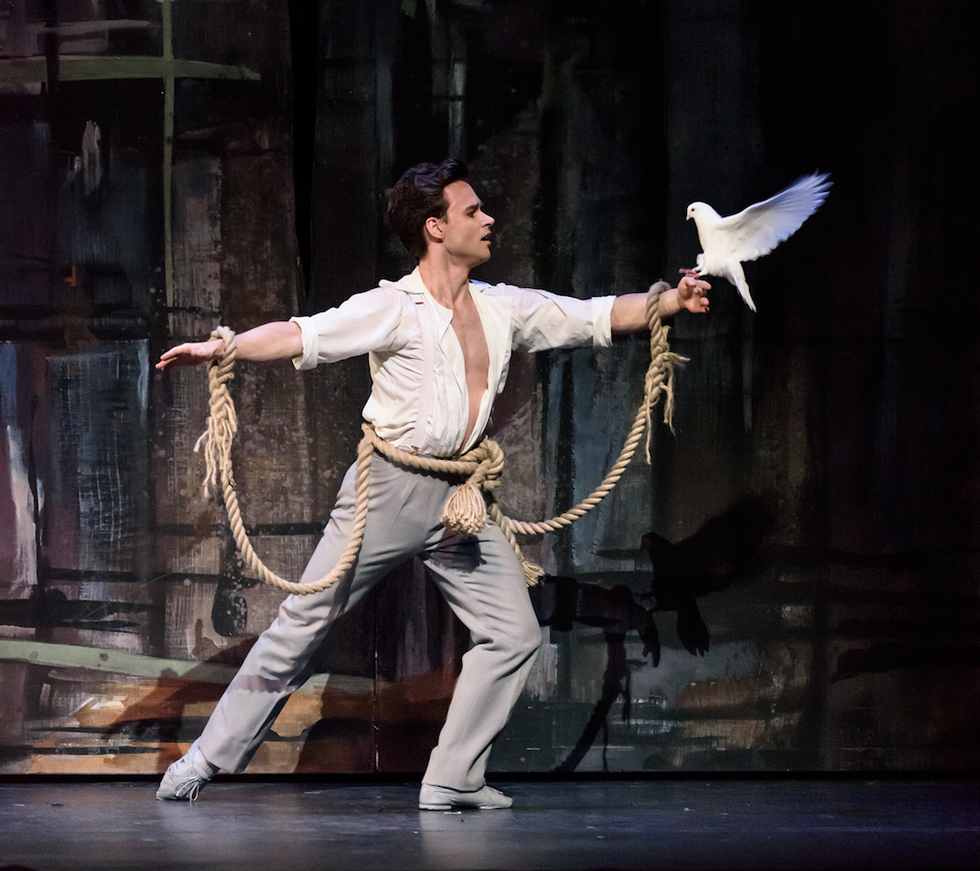 The Royal Ballet's Alexander Campbell in The Two Pigeons

Mole, the hero pigeon tasked with landing on the Young Man's hand after being released from about two meters offstage, has been trained to associate outstretched hands with the possibility of "high-value food rewards." "Hemp is a bit like pigeon chocolate," says Hills. "As long as being held and caught by a stranger is not fearful, as long as they can gamble to get high-value food, they maintain the behavior." Hills likes to have whoever is on as the Young Man rehearse this part backstage during intermission with some fresh hemp.

Even more tricky is the final scene, where a pigeon stays put on the Young Man's shoulder while he descends a flight of stairs, before transferring it off his shoulder to a perch on an ornate wicker chair, where it must stay while the two leads dance a seven-minute pas de deux. To accomplish this scene, Hills deploys a second hero pigeon, usually a male named Bianca. Bianca has only flown recreationally in the aviary, but never in training. "He's been highly trained for sitting and waiting," says

After the pas de deux, Bianca serves as the decoy for Mole to fly to. Despite Mole's earlier misadventure into the orchestra pit, Clarke says that she did her last flying pass beautifully. "She made up for it," he adds.

Related Articles Around the Web
sir frederick ashton pigeon animal reece clarke emma hill the two pigeons
If you like us online, you'll love us in print!
Instagram
Pointe Magazine