"I am constantly intrigued by individuals and what makes people unique," says Schumacher. "Even when they're dancing together, you see seven very different people doing something." Photo by Kyle Froman for Pointe.

Troy Schumacher has been very busy.

The final days of September saw the New York City Ballet corps member rehearsing for a full slate of performances while simultaneously preparing the premiere of Common Ground, his second ballet for the company.

Schumacher's first work for NYCB, Clearing Dawn, was notable for its athleticism, high energy and refreshing youthfulness. Similarly, Common Ground is profoundly physical, with dancers exploding through the air in bursts of sissonnes and bounding over imaginary puddles with successive grands jetés. But in contrast, "the mood is a little darker, a little more mysterious," says NYCB soloist Ashley Laracey, who is also married to Schumacher.

Throughout rehearsal, the dancers focus in on each other. "Troy's ballets are about the community feel and what we create onstage, not so much towards the audience," says Laracey. Though Schumacher is influenced by Balanchine's athleticism, he also relates his approach to Jerome Robbins: "I value a lot of what Robbins did; he kind of started with having non-presentational works."

While this is only Schumacher's second work for NYCB, he's had plenty of practice. In 2010, he founded his own company, BalletCollective, which incorporates dancers, musicians, writers and artists into a collaborative creation process. The group rehearses during NYCB's layoffs, with Schumacher fitting in administrative duties in his spare time. "It's been a really great basis for me to understand everything that it takes to make ballet really possible, because I've had to do it all," he says.

Whether he's working with BalletCollective or NYCB, for Schumacher it all comes back to collaboration. (For instance, the score for Common Ground was composed by Ellis Ludwig-Leone of the indie band San Fermin.) "By collaborating with people—when it works—you're seeing your art in a new light and they're seeing theirs in a new light," says Schumacher. "I'm responsible for the choreography, but I'm also responsible for enhancing my collaborators' art and vice versa."

Photographed by Kyle Froman for Pointe. 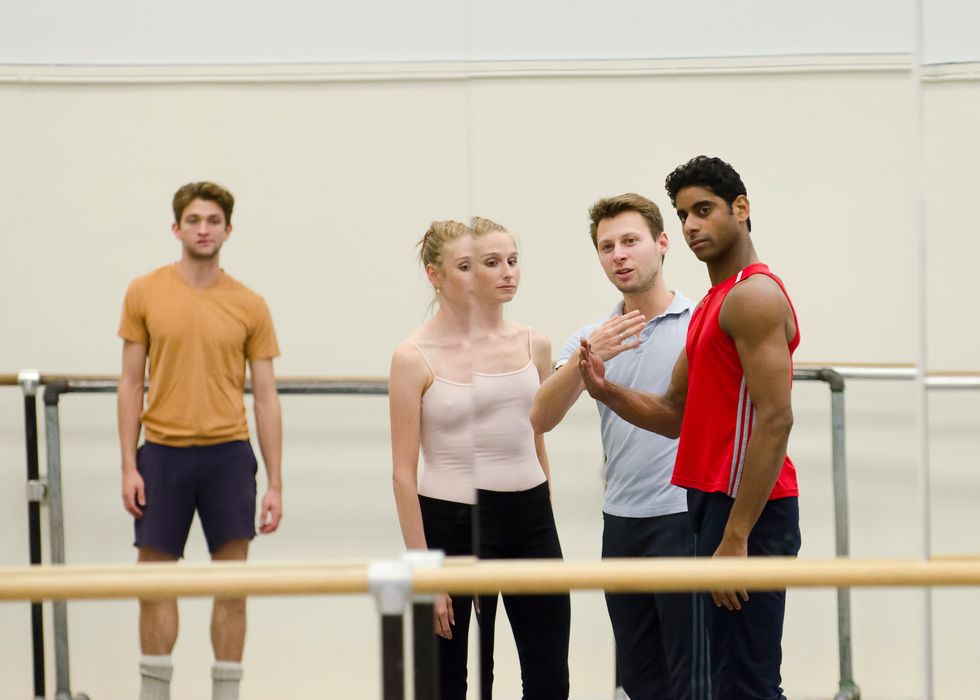 "I try my best to empower the dancers," says Schumacher, shown here with Ashley Laracey and Amar Ramasar. "I feel like the more personality I can get in their movement, the better it reads from the audience."