Tiler Peck: Her Career, Her Romance, Her Broadway Plans...And Her Dogs

This is Pointe's August/September 2014 Cover Story. You can subscribe to the magazine here.

A few months ago, Tiler Peck turned 25. It's an age when most ballet dancers are earning their first breakout roles, gradually discovering who they are onstage.

Not Peck. She followed an uncommonly accelerated path to the spotlight, joining New York City Ballet as an apprentice in 2004 at age 15 and becoming a principal in 2009. An enormously versatile dancer with prodigious technical gifts, she already has an enviable ballet resumé. She knows exactly who she is on NYCB's stage.

Yet Peck has an appetite for challenges that has led her outside the ballet world. Her growing list of musical theater credits isn't a surprise to longtime fans: Peck started out in jazz and commercial work, earning a role in director/choreographer Susan Stroman's production of The Music Man on Broadway when she was just 11. She and her husband, fellow NYCB principal Robert Fairchild, had a well-received turn in the New York Philharmonic's production of Rodgers and Hammerstein's Carousel last year, which was later broadcast on PBS.

In October, Peck will take on her biggest theatrical challenge to date: She's set to dance (and sing and act) the title role in the new musical Little Dancer at the Kennedy Center. The project reunites her with Stroman, who custom-tailored Little Dancer—the story of the student who inspired Edgar Degas' iconic sculpture—to Peck. “I was envisioning Tiler even as we were writing it," Stroman says. “From the earliest stages, it was always her in my mind."

In a way, Peck is a throwback to crossover dancers from 50 years ago. She's a modern-day Vera Zorina, with that dare-you-to-look-away star quality many of today's ballerinas lack. There is a certain hardness to that kind of glitter; Peck has yet to master the more soulful roles of the classical repertoire, and Broadway's razzle-dazzle seems unlikely to deepen that side of her artistry. But few performers feel as at home singing Rodgers and Hammerstein as they do dancing Balanchine. What other 25-year-old could inspire a Broadway director to conceive a musical for her while simultaneously serving as a muse for contemporary ballet choreographers? Peck is a true stage animal. 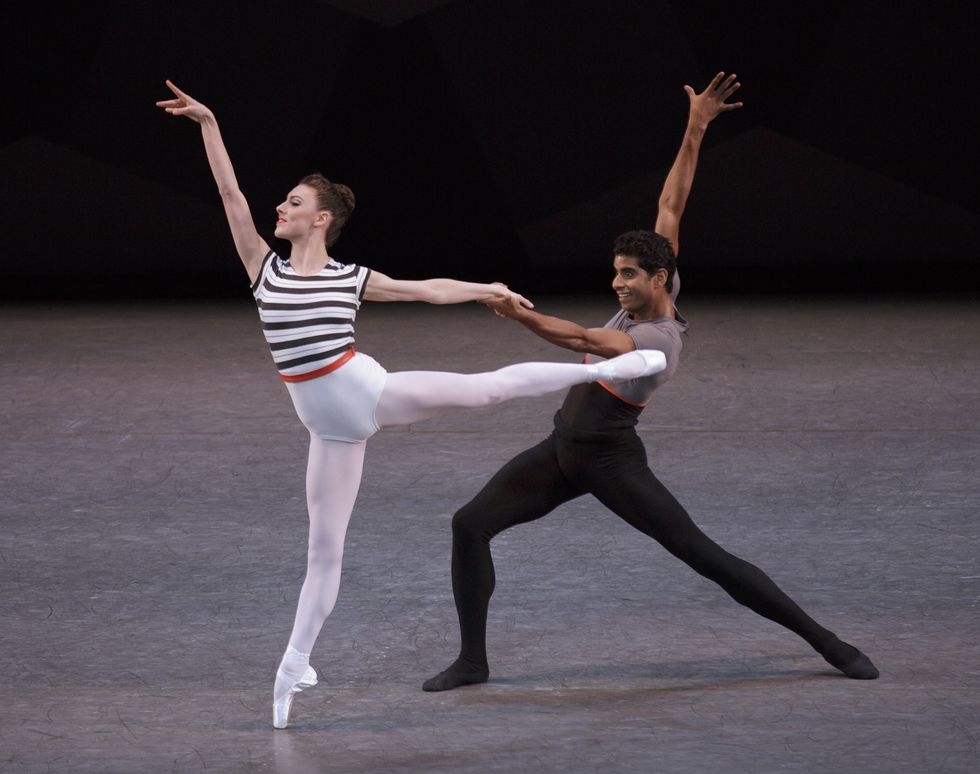 Navigating her jam-packed schedule—at the moment, she's essentially working two full-time jobs as she rehearses for Little Dancer's opening—requires exceptional drive. That's never been a problem for Peck. Even as a young child studying jazz and other styles at her mother's dance studio in Bakersfield, California, she was always hungry for more opportunities. In her jazz classes, she discovered the freedom that now characterizes her performances at NYCB. “I think that background gave me something unique—it kept me from being afraid," she says. “In jazz, you're throwing your body around all the time. You learn to just go for it."

At 7, Peck began studying with former Bolshoi dancer Alla Khaniash­vili. Though it took her a while to warm up to ballet—“I was always 'sick' when it was time for ballet class," she remembers—her mother insisted that she develop a solid technical foundation. Later Peck worked with former NYCB dancers Yvonne Mounsey and Colleen and Patricia Neary, who introduced her to Balanchine technique.

At the time, however, Peck was more interested in commercial work. When she got the call for The Music Man audition, she figured it was a long shot—previously, the role of mayor's daughter Gracie Shinn had been played by an 18-year-old—but ended up booking the job. She moved to New York for a year to perform in the show, accompanied by her grandmother. While in New York, Peck began studying at the School of American Ballet, and found that she relished the difficulty of Balanchine's style. A few years later, she enrolled in the school's full-time program.

Peck loved living with like-minded ballet students, including Fairchild, in the school's dorms. “It was like college, but at 14," she says, laughing. Soon Fairchild became her first boyfriend. He also came from the jazz world—they'd first met a few years earlier in a jazz class at Steps on Broadway. “What we felt for each other was so big that at that age, we didn't know what to do with it," Peck says. They were an on-again, off-again couple for years. “I always knew she was the one," Fairchild says, “but we both needed to grow up a little." 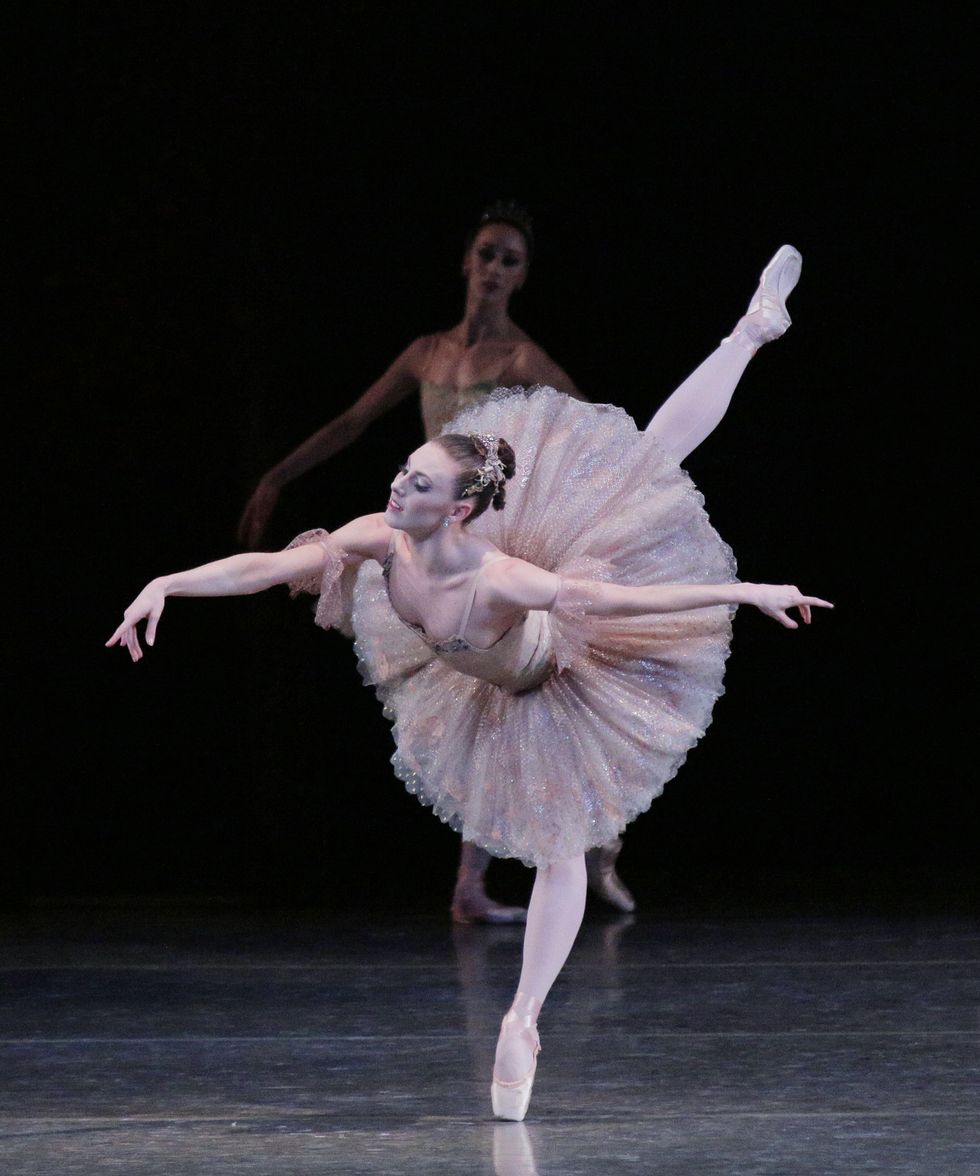 At 15, Peck became a NYCB apprentice, and a few months later she joined the corps de ballet. Before long, artistic director Peter Martins had cast her as the lead in his Friandises, a showcase for rising corps dancers. Roles began coming thick and fast; Martins felt she was ready. “You would have to have your eyes closed not to recognize Tiler's gifts," he says. “Even at a very young age, she had an uncanny ability to understand the essence of each ballet—be it classical, romantic, contemporary, or neoclassical."

Peck was just 20 when she became a principal. A couple years later, Stroman arrived at the NYCB studios to choreograph a new work, Frankie and Johnny…and Rose, with Peck at its center. By then Stroman had already begun thinking about Little Dancer. When Stroman asked Peck to participate in the musical's workshop, the ballerina was initially taken aback. “I knew I wanted to come back to musical theater eventually, but I thought it would be something I'd do later on, a transition out of ballet," she says. “I love City Ballet, and I have so much more to accomplish here." Still, she found herself drawn to the show's story, which follows the spirited Paris Opéra Ballet student who posed for Degas' Little Dancer Aged Fourteen sculpture. Stroman and Martins worked together to ensure that none of her work on Little Dancer, which has a limited run at the Kennedy Center, would conflict with her NYCB schedule. “I didn't want to choose one or the other—I wanted it all," she says. “I'm so happy that somehow it worked out."

Peck and Fairchild also worked out: In June, they married in New York City. Over the past few years, as they began dating seriously, they have danced together with increasing frequency, both at NYCB and on side gigs. “Not only do we have a great time together—she laughs at my jokes!—but we also push each other to be better," Fairchild says. Peck appreciates that the two of them share the same drive. “When I'm working with other partners, I'll say maybe five of the 10 things I want to fix," she says. “With Robbie, we're so close that we can both say it all, and make everything as perfect as possible."
Though Peck sees more Broadway in her distant future, her current goals remain ballet-focused. She still dreams of conquering the dramatic roles that have so far eluded her, particularly Odette/Odile in Swan Lake. She has also enjoyed showing more of her natural persona onstage through the vibrant ballets of Justin Peck. There are more ballet mountains for her to climb, and she's not a timid mountaineer.

“The thing about Tiler is that you always have fun watching her onstage," Fairchild says. “She works incredibly hard in the studio, and that's how she's become such a powerful artist. But by the time she gets to the performance, there are no nerves. You know it's going to be spot on."