For many professional ballet dancers, Nutcracker means weeks of performances. That usually translates to multiple casts—and important breakout opportunities for those in the junior ranks. On the afternoon of December 13, Pennsylvania Ballet demi-soloist Thays Golz made her debut as the Sugar Plum Fairy along with her Cavalier, corps member Austin Eylar. For the Brazilian-born dancer, who joined PAB in 2018 after two seasons at Houston Ballet, Sugar Plum marks one of her first principal roles.

"I'm really excited," says Golz. PAB artistic director Angel Corella appointed 12 casts of Sugar Plum Fairies over the run's 29 performances. "When I first found out, I was like, 'Pinch me!' I still can't believe it."

We caught up with Golz just before her debut to see how she prepared for her big break. 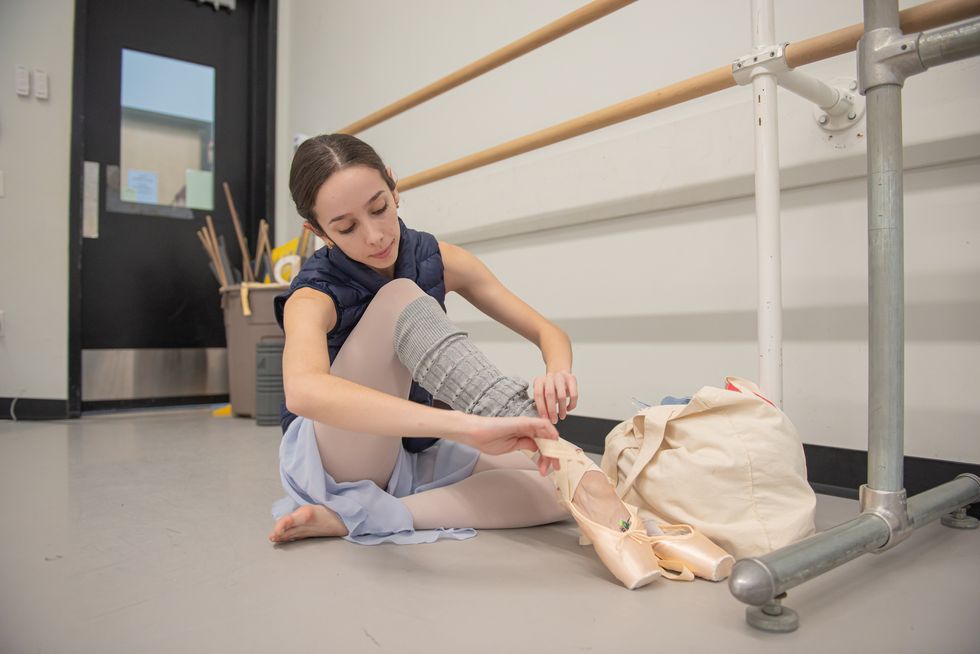 Golz preps her pointe shoes before her variation rehearsal. 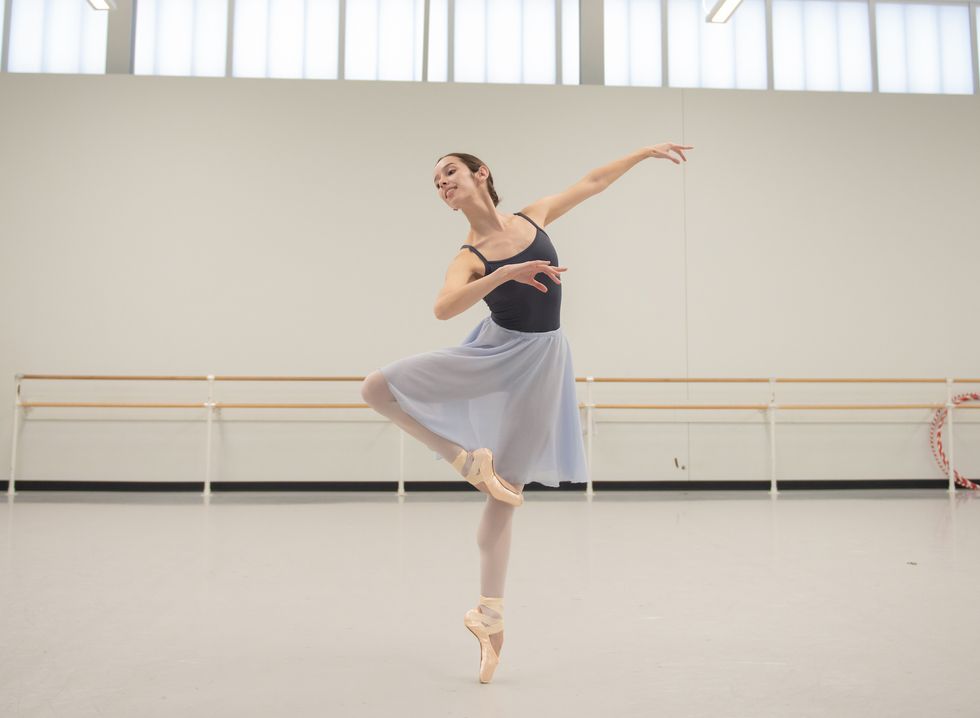 Golz runs through her variation at Pennsylvania Ballet's studios one week before her debut on December 13.

But Sugar Plum took up much of her focus—Golz started preparing for her rehearsals as early as morning class. "I think about my port de bras, how I can lengthen my muscles," she says. "Then once I get into rehearsal it feels more natural." 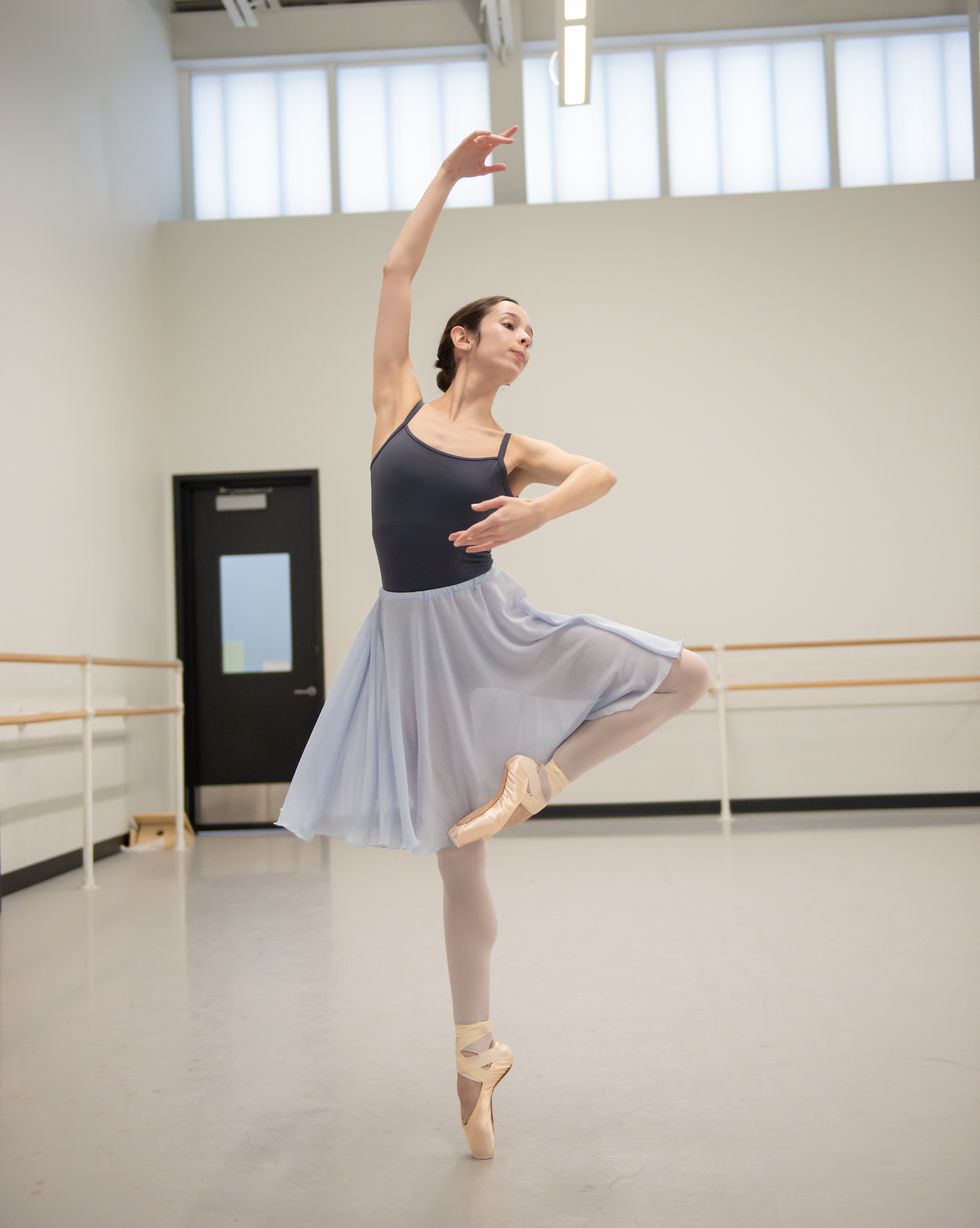 Although Golz admits she never connected much with Nutcracker as a student, her time at Houston Ballet changed that, especially after watching former principal Sara Webb perform the Sugar Plum Fairy. "It was the most beautiful thing I've ever seen," says Golz. "She was so delicate and sweet, and her technique was so clean and precise. Now I think about how she used to do it and how that can inspire my own work." 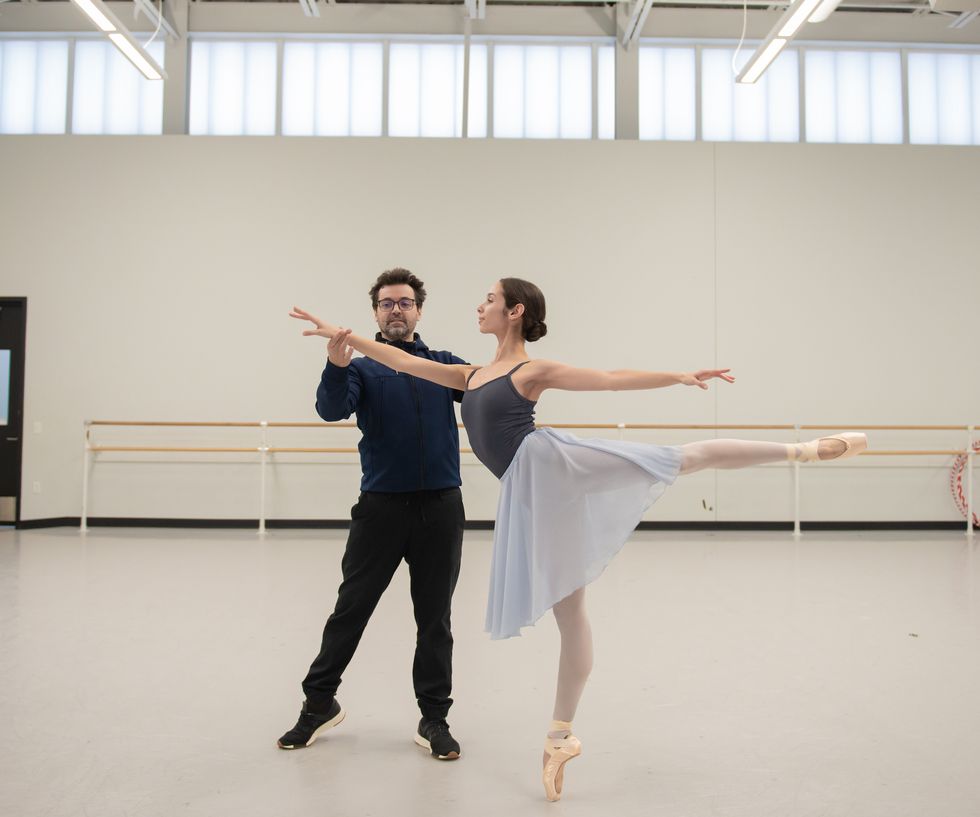 Artistic director Angel Corella works with Golz to perfect her arabesque during rehearsal.

Pennsylvania Ballet performs George Balanchine's version of Nutcracker, and while Golz rehearsed the role every day, she didn't grow up training in the choreographer's signature style. "It's not like The Sleeping Beauty, where everything is soft," she says. "It's more dynamic, so I had to make my movement more energetic in places. It took me a while to get right." 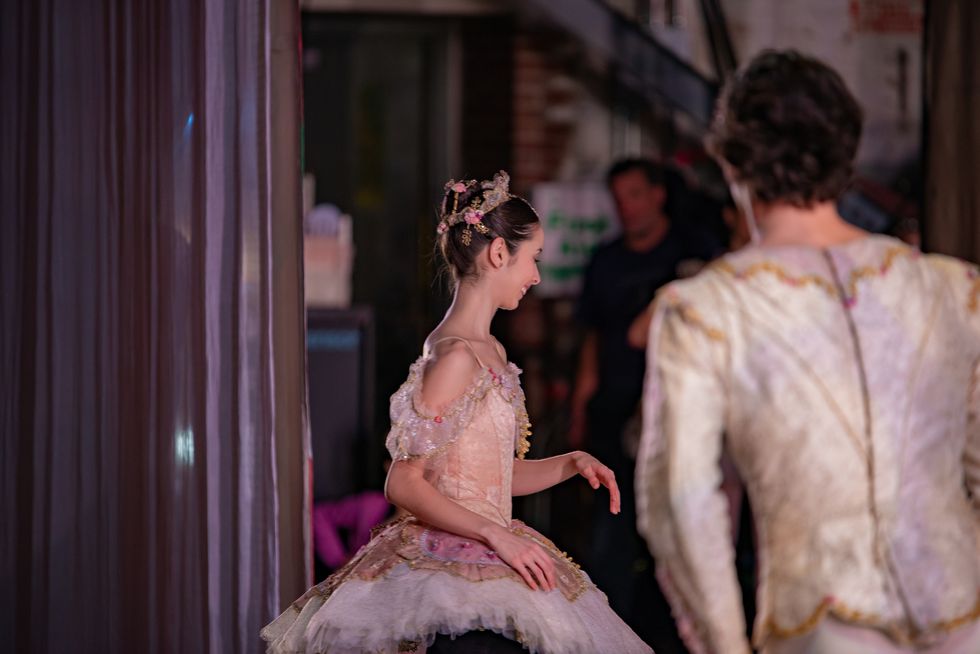 Golz gets ready backstage at Philadelphia's Academy of Music for her first stage rehearsal in costume.

This is especially true in Sugar Plum's solo, which comes early in Act II. "It's such a technical variation and you get so tired," she says. She also found the Balanchine trademark of spotting front, as opposed to the corner, hard to get used to, "It's very tricky but now I'm getting it, finally," says Golz, who watched videos of New York City Ballet's 1993 motion picture to help absorb the style. "And my coaches have helped me a lot."

Developing Her Partnership and Finding Her Character 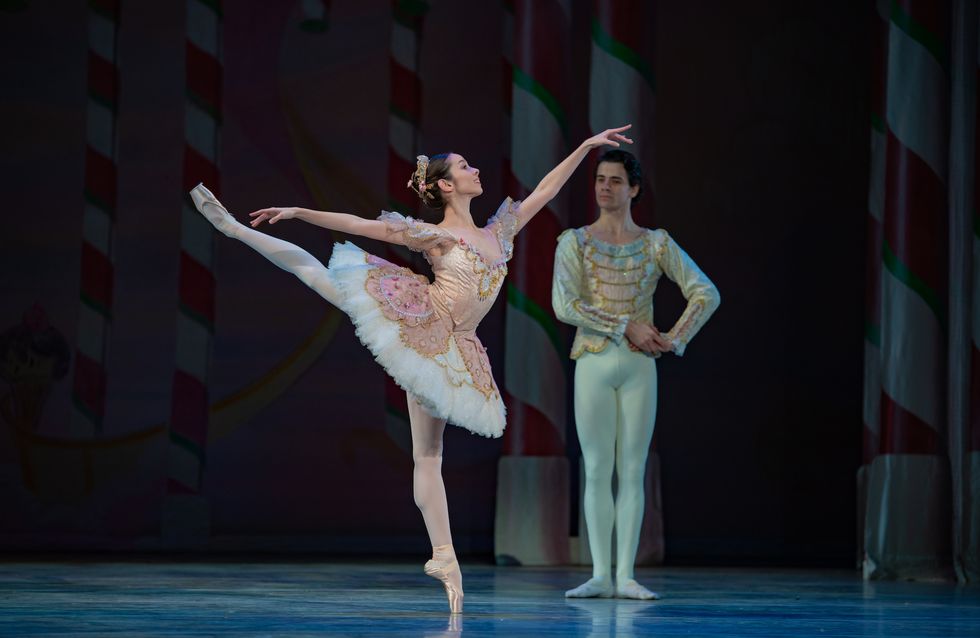 Golz takes an arabesque while her partner, corps member Austin Eylar, looks on.

Throughout the rehearsal process, she and Eylar worked hard to create a seamless pas de deux. "In the beginning we had to figure out what works for us," she says. She notes that a long arabesque promenade at the very end of their duet is particularly challenging. "You calves are screaming, cramping," she says, laughing. "I have to stay strong in my leg, hold on to Austin and let him do the rest. If you try to do too much yourself, things start to go wrong. So I trust my partner, stay calm and the rest happens." 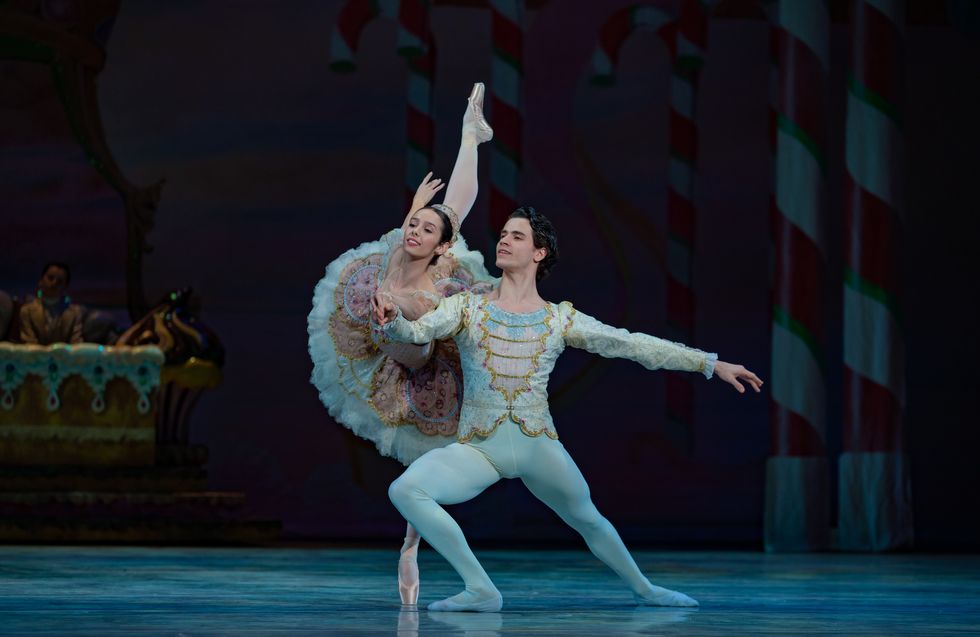 Golz and Eylar run through their pas de deux during a stage rehearsal last week at Philadelphia's Academy of Music. It will also be Eylar's debut as the Cavalier.

Golz also thought a lot about her characterization. "Sugar Plum's name says it all: She's very sweet, happy and uplifting. It really helps during full runs, when I am surrounded by the little angels. They're very cute, and I try to communicate with and dance to them. In the pas de deux it's a little harder to find her, but it's become easier as I've become more comfortable in rehearsals." 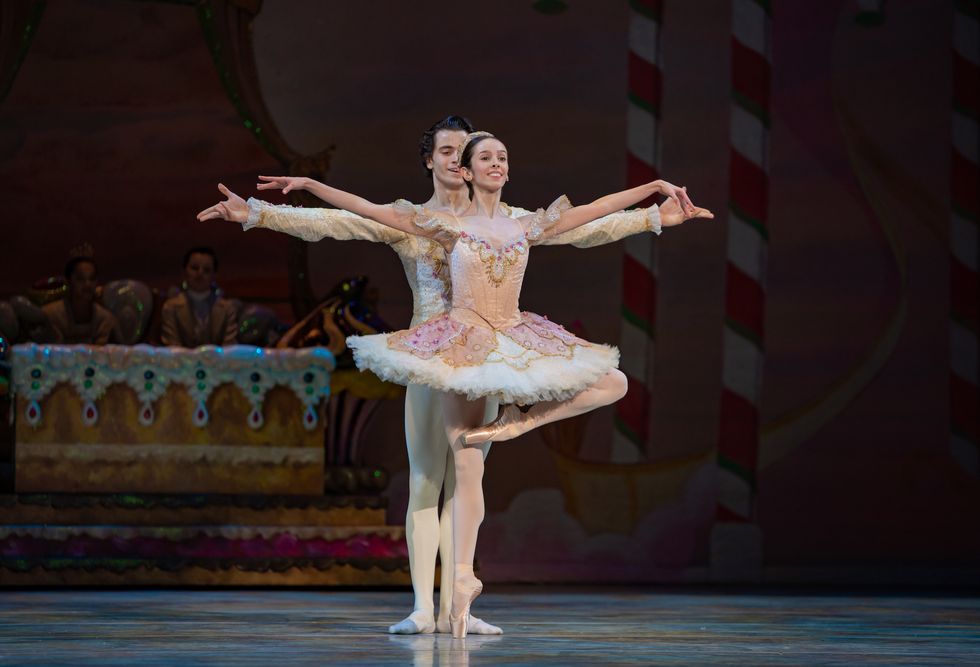 Golz and Eylar finish up the coda with a bug smile during last week's stage rehearsal.

Despite weeks of intense preparation, Golz only had one performance of Sugar Plum during this Nutcracker run. "But I feel like I am on the right track, and I trust Angel to know when I'm ready to do things," she says. "I may only have one show, but I will treasure it."

Last year we found out that Canada's Ballet Jörgen was creating a full-length ballet based on one of our all-time favorite children's books—Lucy Maud Montgomery's Anne of Green Gables—and, needless to say, we were thrilled. It seems that audiences everywhere feel the same way. Since its premiere in Halifax, Nova Scotia, in September of 2019, artistic director Bengt Jörgen's production has been presented in a long list of cities across Canada and the upper United States.