Ballet excels at defying gravity. Lightness, ethereality, wispiness, symmetry, lineal order, chivalry and blissful endings to well-worn tales bestow on ballet a reputation as an art form that embraces divine beauty and design. But themes of grief, trauma, death, war, annihilation, exploitation, abuse, oppression and genocide do not frequently skim the surface sur la pointe. Bearing weighty burdens has traditionally found a place in the realm of modern dance in works such as Martha Graham's Lamentation, or Paul Taylor's image of Armageddon in Last Look.

But beyond shimmering tutus and pristine arabesques, there are other reasons why heavy issues seldom appear on the ballet stage. Taking on a serious subject requires a serious treatment. A ballet about terrorism could easily trivialize the subject through melodrama or prettification. Classical vocabulary was born from noble demeanor in the royal courts; in the wrong hands, it can seem limited in registering the mood of a sordid subject or for expressing disturbing behavior. Add to that the industry's marketing directors and board members, tempted towards steering directors and choreographers away from challenging ballets for fear of poor ticket sales. 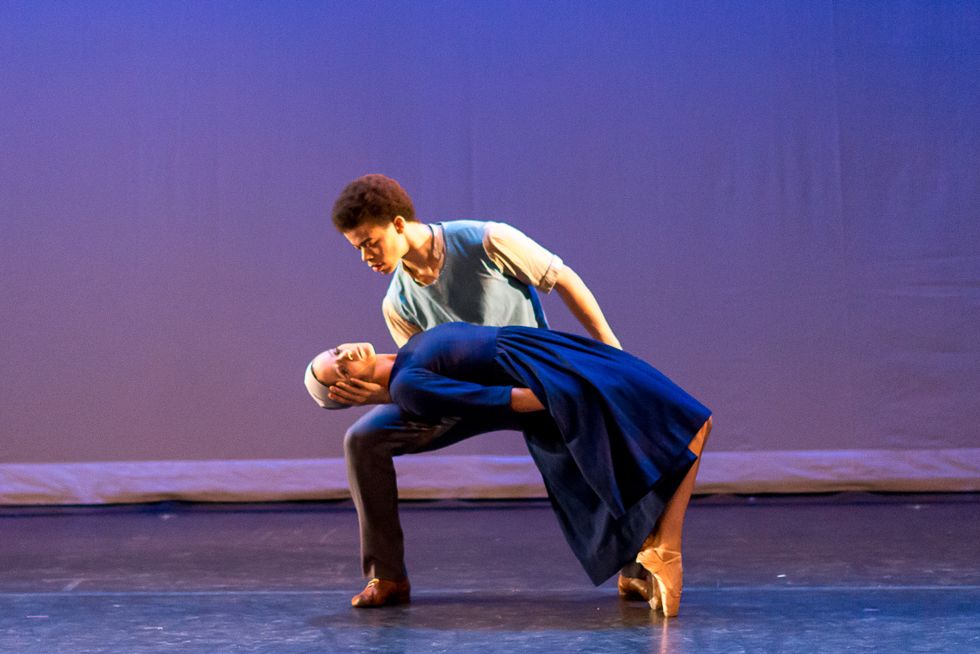 Outside, the bright sunshine and gentle breezes made for one of those perfect days of May—ideal conditions for the epidemic of spring fever that seemed to have broken out in American Ballet Theatre’s Studio 5. One ballerina crossed the floor in a pair of snowshoes. Another zipped by on roller skates. A pretty redhead pulled a single pointe shoe out of her dance bag, put it on, then went out to dance with nothing but calluses on her other foot. Men in dark aviator glasses caromed around in a make-believe jalopy, while a hack with a flash bulb snapped pictures for the tabloids. At the front of the room, Freddie Franklin stood chuckling at it all.

This was—ahem—a serious rehearsal for the company première of James Kudelka’s zany, Prohibition-era Cinderella, which debuted on June 3 at the Metropolitan Opera House in NYC. The dancers were obviously enjoying the madcap choreography, but amidst all the laughter and commotion a sober young man stood to the side, quietly taking it all in. Tall, with a full head of wispy blond hair and a long forehead ending in a strong brow, David Hallberg has prominent, attentive eyes that possess a melancholic, preternatural maturity. He is, in a word, regal.

Born in Rapid City, South Dakota, and raised in Phoenix by way of Minneapolis, Hallberg, 24, describes himself, with a shrug, as “the all-American boy.” Sure he is.

A South Dakotan prince? “Seeing is believing,” says Georgina Parkinson, ABT’s English ballet mistress. “How much more refined could he be?” Parkinson finds that American dancers sometimes have to search for their bearings when cast in roles requiring Old World nobility. Not Hallberg. “He just has to stand there,” she says. “God gave him a beautiful instrument. He’s a natural prince, with all those elegant qualities. He was born with it.”

In May, this prince was crowned principal dancer at ABT. “We were out in Orange County, having a company meeting,” Hallberg recalls. “I was sitting in the back of the room, just hanging out, when Kevin [McKenzie, ABT’s artistic director] said, ‘I thought you all might like to congratulate our newest principal dancer, David Hallberg.’ My jaw just dropped. Suddenly everyone was screaming and clapping.”

There had been whispers that Hallberg would make it to the top—ever since the day when a 13-year-old Hallberg first walked into the Arizona School for the Arts. Kee Juan Han, a former soloist with Boston Ballet, had just started the dance program there; Hallberg was among his first batch of students.

“Straight away, the talent was obvious,” Han says. “The physique was meant for classical dance: perfect body, perfect proportions, beautiful feet and a princely look, even at that age.”

Anna-Marie Holmes, Han’s teacher and then–artistic director at Boston Ballet, remembers receiving an excited phone call from Han around that time: “I’ve got this kid who’s beautiful! You have to see him!”

But first Han had to get his star student to switch to ballet from tap and jazz. Hallberg had started dance at around age 9, after watching a Fred Astaire film. “One Halloween, I taped nickels to the bottom of my shoes, to be a tap dancer,” he recalls. “I just loved Fred Astaire. He was so suave, so smooth—seamless.”

Han didn’t pressure his young student, but waited for him to make up his own mind. One day, Hallberg came knocking on Han’s door: “I want to do classical ballet.” Han told him that he was starting late, and he’d have a lot of catching up to do, then set a rigorous regimen of two technique classes a day, with private lessons two or three times a week, for four years. “I have never worked so hard,” Hallberg says. He credits Han with laying the foundations of a technique and work ethic that continue to impress Hallberg’s teachers to this day.

“Sometimes I wish I’d had a little more time to ground my technique,” Hallberg says, “but I learned a lot doing tap and jazz, and maybe I wouldn’t have become obsessed with classical ballet if I had been exposed to it earlier.” He pauses and thinks a moment. “No, actually I probably would have become obsessed.”

Hallberg was the only boy in his ballet classes in Arizona; by senior year of high school, he began to crave new challenges, maybe a bit of competition. “I needed to take class with guys, be in a more professional atmosphere, go to a finishing school,” he says. On Han’s advice, Hallberg applied to the Paris Opera Ballet School: “I sent a video. I really didn’t think I had a chance, being American and all, but I got in.”

When Hallberg talks about his year at POBS, one senses it was a difficult time in a young man’s life. “It was very strict,” he says. “We called the school ‘Le Prison.’” He didn’t speak the language and hardly spoke at all for the first three months (by the end of the year, he was fluent). Complicating his situation, Hallberg was placed in the school’s hyper-competitive first division, the company feeder, where he sensed a certain resentment directed at the American interloper. Hallberg, who is very affable and warm in person, sums up his year in Paris in rather brusque terms: “I wasn’t there to make friends.”

Hallberg’s Parisian classmates needn’t have worried. From the age of 15, he had set his sights on ABT. “In high school, I idolized dancers like Angel Corella, Ethan Stiefel and Vladimir Malakhov. It was always very clear to me that the best men go to ABT.” From Paris, Hallberg entered his second ABT summer intensive; it was there that a corps dancer named Michele Wiles first spotted him. She remembers telling John Meehan, then director of ABT’s Studio Company, “He’s going to be a principal.”

In 2000, Hallberg was taken into the Studio Company, and he joined the corps de ballet a year later. His first big break came when McKenzie selected him to partner Wiles in the 2002 Erik Bruhn Competition. “Here was a guy who had all the ingredients to be a great male dancer,” says McKenzie. “Sometimes the public, the critics, see that and they want to push it too fast. I thought, OK, here’s a chance to work with him, to teach him some partnering.” McKenzie says he didn’t care if the couple won (they did); the point was to get two young talented dancers into the studio, and “take it one step in front of the other.”

“It’s hard work to build a partnership, in dance as in life,” says Wiles, now an ABT principal herself. “David and I have been on a journey together. There’s something to be said for starting together from the very beginning—it creates that chemistry onstage.” Audiences saw the spark between the two when McKenzie took the unusual decision of letting Hallberg and Wiles make their debuts together in Swan Lake. “There was a sense of vulnerability, a rawness to it,” Hallberg says of their performance, “a sense of curiosity, of making a discovery together for the first time.”

Hallberg also likes having a variety of partners: “Gillian [Murphy] is such a technician, such a tour de force, it’s a challenge just to keep up with her; and Julie [Kent] is such an artist,” he says. “Dancing with Julie is a gift unto itself.” On his partner wish list: Svetlana Zakharova of the Bolshoi and New York City Ballet’s Wendy Whelan, although Hallberg thinks the latter pairing might be problematic: “I love to watch Wendy so much, I think I would be distracted—I’d be onstage and I’d just want to watch her.”

These days, this princely dancer is proving his range—most notably as Death. He first laid ‘em low in the 2003 ballet Hereafter, then slew everyone onstage and the critics, too, in ABT’s recent revival of Kurt Jooss’s antiwar The Green Table. Hallberg not only dominated the stage as Death in that ballet, he brought a strange beauty and tenderness to the role. Many consider it his breakout performance.

“There is such intensity to Death,” Hallberg says of the role. “He’s such a colossal character: menacing, powerful, forceful, yet compassionate. There are moments in the ballet when he expresses such compassion for the people he is taking with him. There’s this sense of power, yet he doesn’t abuse it; it is what it is.”

At only 24, “[Hallberg is] an artist already,” says Holmes, who coached him in Raymonda and Le Corsaire. Parkinson values the fact that Hallberg brings his own perspective to the studio: “He’s smart, interested in life, sees theater, museums; he reads. He’s becoming really an all-around human being.” Hallberg says he enjoys anything from the opera or symphony to seeing a contemporary art exhibition or the work of an avant-garde choreographer. He sees his next challenge as “growing and evolving as an artist, with the security of being a principal.”

“Everyone blooms at a different time,” Hallberg says. “I’ve had to learn in the past three or four years to chill out, have a little patience. When I stopped worrying about everything happening at once, that’s when things started coming together.”

Tango Tanner is a writer who lives in New York.