Behind the Scenes of Cats: Francesca Hayward, Steven McRae and Robbie Fairchild Take Us Inside the Major Motion Picture

"I don't care how much you love it," Robbie Fairchild groans theatrically. "Who wants to take ballet at 6:30 in the morning?"

But for a span of roughly four months, that was part of the daily routine for the dancers appearing in Cats, Tom Hooper's new film adaptation of the iconic Andrew Lloyd Webber musical, which opens in theaters December 20. The cast boasts A-list talent pulled from the worlds of acting (Dame Judi Dench, Sir Ian McKellan), music (Jennifer Hudson, Taylor Swift) and dance—most prominently, Royal Ballet principal Francesca Hayward, who makes her big-screen debut as Victoria, one of the film's leading roles. Because she was expected to get right back into company rehearsals as soon as filming concluded, there was a ballet teacher and an accompanist on set every morning so Hayward, and castmates such as Fairchild (who plays Munkustrap) and Royal Ballet principal Steven McRae (who plays Skimbleshanks), could warm up and stay in shape. With 12-hour shoot days, 6:30 am was frequently the only time available for class.

Keep reading...
If you like us online, you'll love us in print!
Trending
Chava Lansky

Bravo to These 8 Hardworking Ballet Dads

With Father's Day just around the corner, we wanted to take a minute to acknowledge some of the dancer dads out there who are doing double duty at home and onstage. So in between feting the father figures in your life this weekend (and thanking them for sitting through countless hours of dance recitals throughout the course of your lives), check out these eight ballet dads below.

Need an excuse for a YouTube ballet break? Probably not, but just in case, here are videos to celebrate some of this month's off-the-beaten-path holidays.

Watch The Royal Ballet in Cinemas All Year Long

Do you ever wish you could teleport to London and casually stroll into The Royal Opera House to see some of the world's best-loved ballets? Well, we have a solution for you: The Royal Ballet's 2018-19 cinema season.

Whether live or recorded, the seven ballet programs listed below, streaming now through next October, will deliver all of the magic that The Royal Ballet has to offer straight to your local movie theater. Can you smell the popcorn already?

When you spend as much time on the road as The Royal Ballet's Steven McRae, getting access to a proper gym can be a hassle. To stay fit, the Australian-born principal turns to calisthenics—the old-school art of developing aerobic ability and strength with little to no equipment.

"It's basically just using your own body weight," McRae explains. "In terms of partnering, I'm not going to dance with a ballerina who is bigger than me, so if I can sustain my own body weight, then in my head I should be fine."

Today, McRae shares videos of his workouts on social media (where he has approximately 150,000 Instagram followers). They are often shot in his dressing room, with a chair as the only prop while he does développés from an arched handstand, for instance—a feat of upper-body strength and flexibility.

"I think people are genuinely intrigued and interested in what we do: I get lovely comments offering suggestions to alter the exercise."

This week, young ballet dancers from across the globe have been studying and competing for coveted scholarships at the Prix de Lausanne. This infamous competition has been a launch pad for many of the ballet world's biggest stars. One such star is Royal Ballet principal Steven McRae, who was a prize winner in 2003 with these two outstanding performances in the finals.

Over the past week, 52 dancers from 14 countries trained in the Royal Academy of Dance syllabus flocked to Lisbon, Portugal, for the 2017 Genée International Ballet Competition. After four days of coaching (see highlights on our Instagram), the dancers competed in two days of semi-finals. By Saturday, the pool had been narrowed to just 11 contestants who performed in the finals at Teatro Camões; five lucky dancers took home medals.

The prestigious gold medal (past winners have included ballet stars such as Stella Abrera and Steven McRae) went to 18-year-old British student Harris Beattie. Beattie made Genée history this weekend as the first dancer ever to win all three awards: gold medal, Dame Margot Fonteyn Audience Choice Award and the Choreographic Award, which he received for his Dancer's Own variation entitled Torn, which he co-choreographed with his teacher, Karen Berry. Beattie trains at the Central School of Ballet in London. 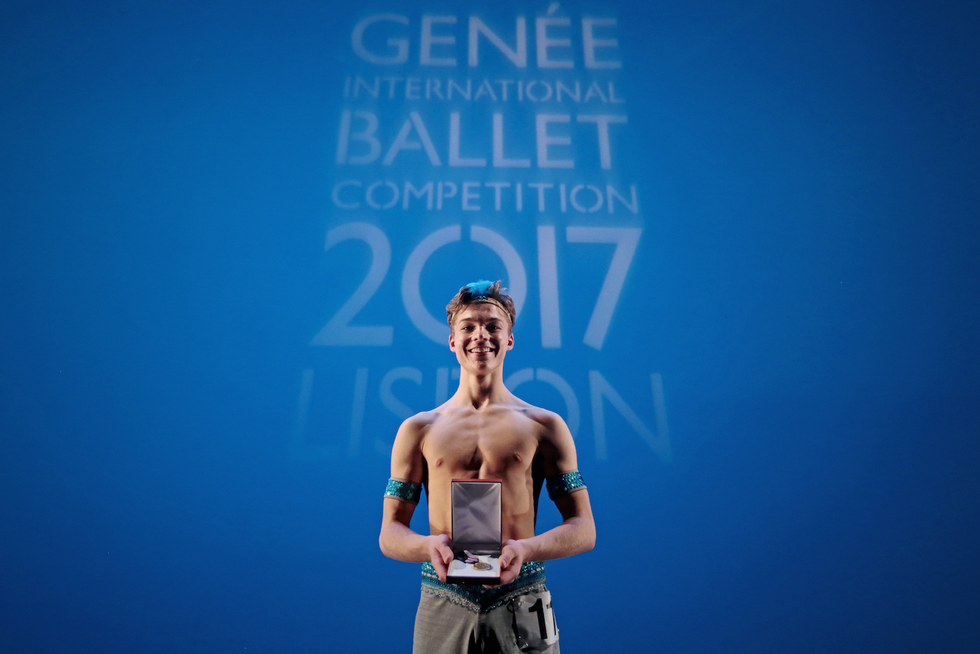 Before They Were Stars, They Were Genée IBC Medalists

On September 7, The Genée International Ballet Competition—the Royal Academy of Dance's flagship event—gets underway in Lisbon, Portugal. Founded in 1931, the Genée recognizes top talent with medals and cash prizes, as well as exposure to company and academy directors. Competitors perform a classical variation, a commissioned piece by an emerging choreographer, and a "Dancer's Own" solo, choreographed by either the competitor, their teacher or a peer.

The 10-day competition, which hosts young dancers trained in the RAD syllabus from around the world, has helped launch the careers of many of today's ballet stars. Just who, exactly? Take a walk down memory lane as we reveal eight familiar faces.

The Royal Ballet Is Heading To Your Movie Theater

If you, like many of us here at Pointe, wish you could have seen Royal Ballet star Zenaida Yanowsky's retirement performance on June 7, you're in luck. The Royal will screen a recording of it in select movie theaters across the U.S. starting Sunday, June 25. (In many cities, it will be screened on Tuesday, July 11.) The program includes three works by the company's founding choreographer, Sir Frederick Ashton: The Dream, Symphonic Variations and Marguerite and Armand—the latter of which stars Yanowsky and Roberto Bolle. You can also catch other Royal favorites like Marianela Nuñez, Vadim Muntagirov, Steven McRae, Akane Takada and Yasmin Naghdi. Make sure to bring tissues!

To find dates, times and theaters near you, click here.

In the spirit of honesty, we'll just come out and say it: Here at Pointe, we're not exactly tap dance experts. But that doesn't mean we've never taken tap, nor that we're immune to the beauty, technicality and historical importance of tap dance. It's just that the dance world doesn't often see crossover performers showing off both their ballet and tap expertise.

Fortunately, Royal Ballet principal Steven McRae is here to show us what that expertise looks like. McRae was tapped (sorry) to play the Mad Hatter in Christopher Wheeldon's Alice's Adventures in Wonderland—a part that involves seriously fleet footwork. In this video from World Ballet Day 2015, he displays his prowess:

There's a lot going on here: McRae, an Australian, is a principal dancer in the UK's largest ballet company. He's combining a uniquely American dance style with the music and historical mannerisms of a specific Hungarian folk dance—which itself derived from Romani music.

But that's the beauty of dance: Its ability to communicate across languages and cultures—even across time. So from one group of ballet devotees to another: Happy National Tap Dance Day!

Photo by Nobby Clark/Arena PAL via The Royal Opera House on Flickr.

Sir Frederick Ashton created his 1980 ballet Rhapsody in honor of Elizabeth The Queen Mother (mother of Elizabeth II) for her 80th birthday. I’d say this serene, elegant pas de deux is fit for a queen—and for the strengths of its lead dancers, Mikhail Baryshnikov and Lesley Collier, on whom the roles were created. In her shimmering blush-pink dress, Collier wafts across the stage, feet fluttering to the piano’s peaceful notes. With his effortless partnering and her full, graceful port de bras, it seems as if there’s no transition from floor to air. My favorite moment is when Collier ducks under each of Baryshnikov’s arms and he reacts with a barely-there embrace, eyes gazing outwards. They strike a perfect balance between dancing for themselves, for each other and for us.

Baryshnikov actually requested the commission for Rhapsody. Judging by the thriving success of the Baryshnikov Arts Center, the creation and performance space he founded in New York City 25 years later, he’ll continue to be a pioneer in the arts for years to come. Lesley Collier became a widely respected coach and teacher after her retirement from the stage. Below, watch her lead Royal Ballet principals Natalia Osipova and Steven McRae in rehearsals for the sublime ballet she starred in. Happy #FlashBackFriday!