The third act variation from Raymonda is deceptively simple–legato and heavy on bourrées and épaulement, it has few pirouettes or showy extensions. Instead, the piece calls for artistry and aristocratic command in order to convey the character's regal persona and the dance's Hungarian flavor. Soviet prima ballerina Natalia Makarova is legendary for her emotive, passionate performances. She interprets the variation with rich soulfulness, flowing through positions with sinuous, unfurling limbs. Her feet tremble like the piano keys as she bourrées, surging and slowing with the tempo. Throughout the variation, her lifted sternum and sophisticated épaulement drum up drama that culminates in her final pose with her head tossed completely back over her shoulder.

Ballet at the Movies: Catch Bolshoi Up-and-Comer Margarita Shrainer in "The Flames of Paris" This Weekend

Ever since Makhar Vaziev took the reigns of the Bolshoi Ballet in 2016, he's been pushing a new crop of promising young talent. Last summer, he chose Alena Kovaleva, then just 18, to dance the lead in "Diamonds" in New York City. This weekend North American audiences have an opportunity to catch another rising company dancer, corps de ballet member Margarita Shrainer, in movie theaters. On Sunday, March 4, Shrainer will star as the strong-willed Jeanne in Alexei Ratmansky's 2008 revival of The Flames of Paris, part of this season's Bolshoi Ballet in Cinema series. Fathom Events and By Experience (BYE) will partner to broadcast the film, captured live from a Moscow performance earlier in the day, to more than 500 movie theaters in the U.S. and Canada.

The Flames of Paris, which is set in the French Revolution, is a high-octane ballet full of dazzling bravura. While Shrainer is no stranger to principal roles, dancing for millions of viewers will add another element of pressure to her performance on Sunday. We spoke to her over email to see how she handles it all.

Keep reading...
If you like us online, you'll love us in print!
popular
Laura Cappelle

Mikhail Messerer's Formula for Making the Mikhailovsky Ballet Stand Out

Ella Persson remembers the rehearsals for her debut as Giselle. "I was in my first year with the company, and I started preparing with Mikhail Messerer during late evenings," the Mikhailovsky Ballet's Swedish-born coryphée says. "I was definitely not ready, but he gave me a chance to push myself and made me so much stronger, mentally and physically."

Under Messerer, the Mikhailovsky Ballet has carved a niche on the Russian and international stage by investing in coaching and dancers' growth. Unlike the older Mariinsky, St. Petersburg's second ballet company was only founded after World War I. But with a classically focused repertoire and productions that rotate onstage every month, it offers plenty of opportunities for talent to thrive. 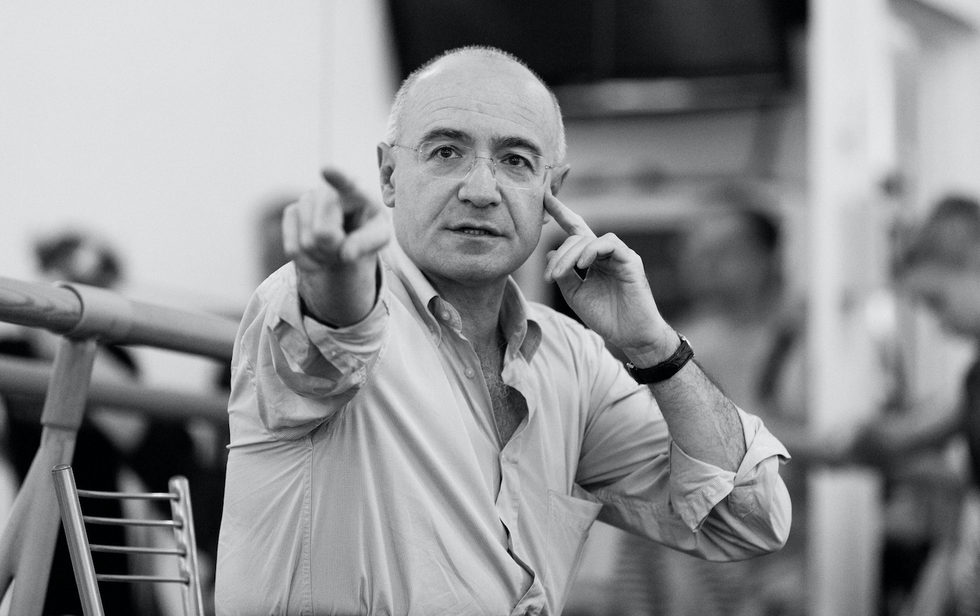 In a dream world we'd all be able to pop over to the Bolshoi to see the best of Russian ballet whenever we want. But because (unfortunately) that's not a possibility for most of us, the Bolshoi makes it easier by bringing their masterpieces to the silver screen. Now in its 8th year, the 2017-18 Bolshoi Ballet in Cinema season presents a wide range of classic story ballets restaged by some of today's most celebrated choreographers. Movie theaters nationwide will screen these ballets starting on October 22; you can find the closest cinema to your hometown here. So grab a ballet-loving friend and a bucket of popcorn and be sure to get your tickets soon—if these knockout trailers are any indication, tickets are bound to sell out fast.

First up is Le Corsaire. Reworked by Alexei Ratmansky (a theme of this year's selections) from Petipa's 19th century classic, this ballet is billed by the Bolshoi as one of their "most lavish productions." A full shipwreck on stage? Yeah, "lavish" seems about right.

100 Years of The Golden Cockerel: Alexei Ratmansky's Revival of the Ballet Russes Jewel Gets Its U.S. Premiere

Choreographer Alexei Ratmansky is passionate about promoting the splendor of early Russian ballet and has, over the last few years, mounted a string of reinterpretations of iconic works. This June his re-choreographed version of The Golden Cockerel, first mounted for the Royal Danish Ballet in 2012, will have its U.S. premiere at American Ballet Theatre, where he is artist in residence. The Golden Cockerel, which was first staged in 1914 by Sergei Diaghilev's Ballets Russes in Paris, is the epitome of Russian art, music, folklore and dance. It follows the exploits of the foolish King Dodon, the powerful Queen of Shemakhan (who has eyes on his kingdom) and the cunning Astrologer, who gives the king a magical golden cockerel to warn him of danger.

While unfamiliar to American audiences, The Golden Cockerel has a rich history. Here is a timeline of this comedic ballet's many reincarnations.

1914 Choreographer Michel Fokine had been toying with the idea of a ballet set to Nikolai Rimsky-Korsakov's opera, based on the poem The Tale of the Golden Cockerel by Alexander Pushkin, for several years. He wanted to try combining ballet and opera completely. The resulting production of The Golden Cockerel had the opera singers seated on either side of the stage while the ballet dancers performed. Tamara Karsavina danced the role of the Queen of Shemakhan, and Italian ballet master Enrico Cecchetti played the Astrologer, but the role of the Cockerel was simply a prop.

The opera/ballet was considered an unqualified triumph. But due to the large scale of its staging and the onset of World War I, it quickly fell from the repertoire.

1937 Colonel Wassily de Basil and the Ballet Russe de Monte Carlo decided to remount Fokine's opera/ballet in 1937. Upon revisiting the work, Fokine chose to create a purely balletic version with musical instruments taking the places of voices. He also changed the Golden Cockerel into a role for a female dancer. Tatiana Riabouchinska and Irina Baronova (who was only 18 at the time) danced the roles of the Golden Cockerel and the Queen of Shemakhan, respectively.

2012 Ratmansky, drawn to what Fokine had described as his best ballet, chose to revisit the work for the Royal Danish Ballet, using elements from both the 1914 and 1937 productions. The resulting ballet, while containing references to its history and moral story, portrays the Russian fairy tale in a bright, swirling kaleidoscope of color. Ratmansky lengthened the 45-minute 1937 version to create a new two-act ballet by including music from the original opera. RDB soloist Lena-Maria Gruber created the role of the majestic Cockerel. “I turn quite diabolical in the end," Gruber says.

2016 In remounting The Golden Cockerel for ABT, Ratmansky has added and changed steps and built in more details. “ABT has different strengths to the Royal Danish Ballet, which I have taken into consideration," Ratmansky explains. ABT principal dancer Stella Abrera has been cast as the Queen of Shemakhan, whom she describes as “an overtly sensual figure" who relishes her position of authority. “This gal is the whole package," she says. “The deeper we plunged into the ballet and the better I understood why the original libretto was controversial—powerful women and foolish rulers—I knew The Golden Cockerel was going to be a lot of fun!" 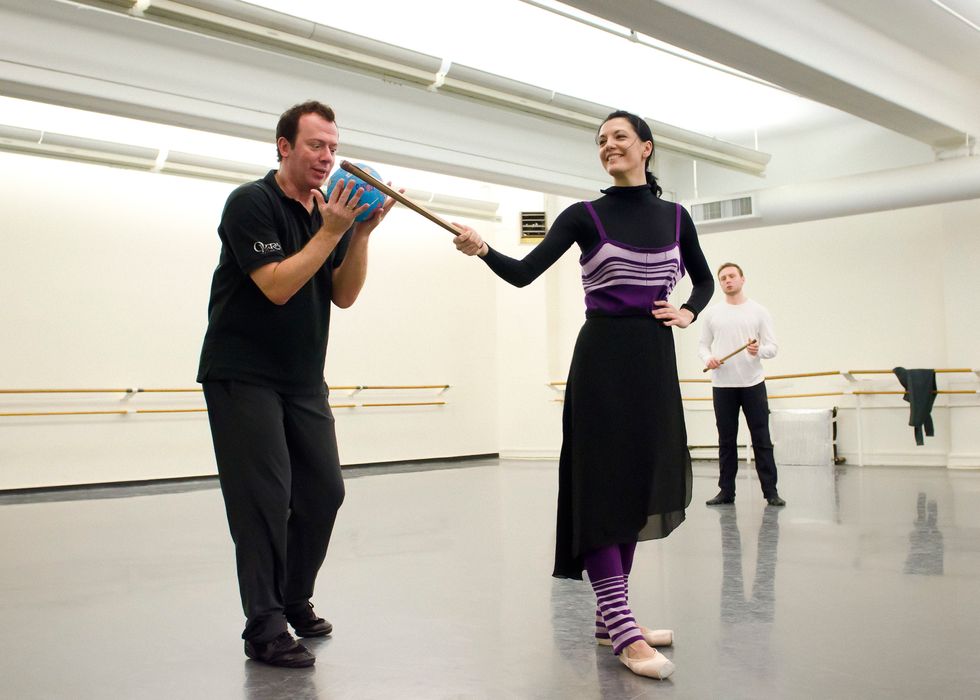 Ratmansky coaches Part and Chryst, who play the Queen of Shemakhan and King Dodon, through a comedic scene. Photos by Kyle Froman for Pointe.

Re-creating a World of Color

Tony Award-winning designer Richard Hudson based the costumes and sets on the original 1914 and 1937 designs by avant-garde artist Natalia Goncharova. According to Ballets Russes dancer Lydia Sokolova, Sergei Diaghilev found Goncharova in Moscow “painting pictures on the foreheads of people in cafés." Her colorful designs, however, perfectly encapsulated Russian folk culture and fairy tale.

When Goncharova redesigned the ballet in 1937, the costumes were made in the London workshop of Barbara Karinska. (Karinska later developed a close collaboration with George Balanchine and New York City Ballet.) Covered in hand painting, stenciling, embroidery and appli­qué, her costumes were works of art but time-consuming to make. Irina Baronova recalled sitting in her dressing room opening night with nothing to wear. Suddenly the sound of sirens was heard by the stage door, and out of two ambulances burst Karinska, her seamstresses and the costumes. After a 50-minute intermission, with many of the dancers pinned into their garments, the curtain finally went up on the ballet.

Lena-Maria Gruber as the Golden Cockerel in the Royal Danish Ballet production. Photo by Per Mortensen Abrahamsen, Courtesy RDB.

For Hudson, reinterpreting the production was daunting: “Working with such a huge palette of colors was difficult to start with, but then liberating, once I understood that anything goes—almost!" He changed the costumes' proportions, he says, “because contemporary dancers are so different in physique." RDB soloist Lena-Maria Gruber, who created the role of the Cockerel, had to adjust to the weight shift created by the elaborate tail. “But it was a lot of fun to be covered in gold head to toe!" she says.

Modern dance companies have been performing in quirky places since the days of Judson. But ballet has its share of branching out of the theater, too. Last weekend, 20 dancers from Russia's Yekaterinburg Ballet performed in a car factory—right alongside plant workers doing their jobs! A temporary stage was installed directly in the factory for the one-act ballet, H2O, performed as part of the Ural Industrial Biennial of Contemporary Art. In addition to the unconventional location, the piece was full of crazy effects: The dancers started out covered in paint, which was washed off at the end of the piece when water dramatically rained down from the ceiling. Check out a clip of the performance on the The Telegraph's site.