This is Pointe's December 2016/January 2017 Cover Story. You can subscribe to the magazine here, or click here to purchase this issue.

At some point during her long career with American Ballet Theatre, Stella Abrera started to think it would never happen; paradoxically, this gave her a kind of peace. But on the evening of May 23, 2015, there she was, onstage at the Metropolitan Opera House, finally performing one of her dream roles: Giselle. It was a moment that had been long deferred. In 2008, as she was preparing for this same part, she was sidelined by an injury. And it turned out to be a serious one, a herniated disk and trouble with her sciatic nerve, which caused pain and debilitating calf weakness and kept her out of commission for almost two years. When she came back, she felt unsure of her body and her future, unable to do the things she had done before almost without thinking.

Yet seven years later, she got her second chance, filling in for another injured dancer. And a remarkable thing happened: The moment Abrera stepped onstage, responding happily to Albrecht's four taps on her cottage door, it was as if she had been dancing the role her whole life. Her Giselle was sweet without being sappy, trusting without having the word “victim" written across her forehead. The jumps were confident, the turns clean, the arabesques limpid. The transformation from woman to wraith was gradual, the love between her Wili and Albrecht still touchingly human. “Stella allows herself to go as far as she can in a particular direction, without ever going over the line," Kevin McKenzie, ABT's artistic director, explains. “She has the taste to make the judgment call and the ability to know where the line is." 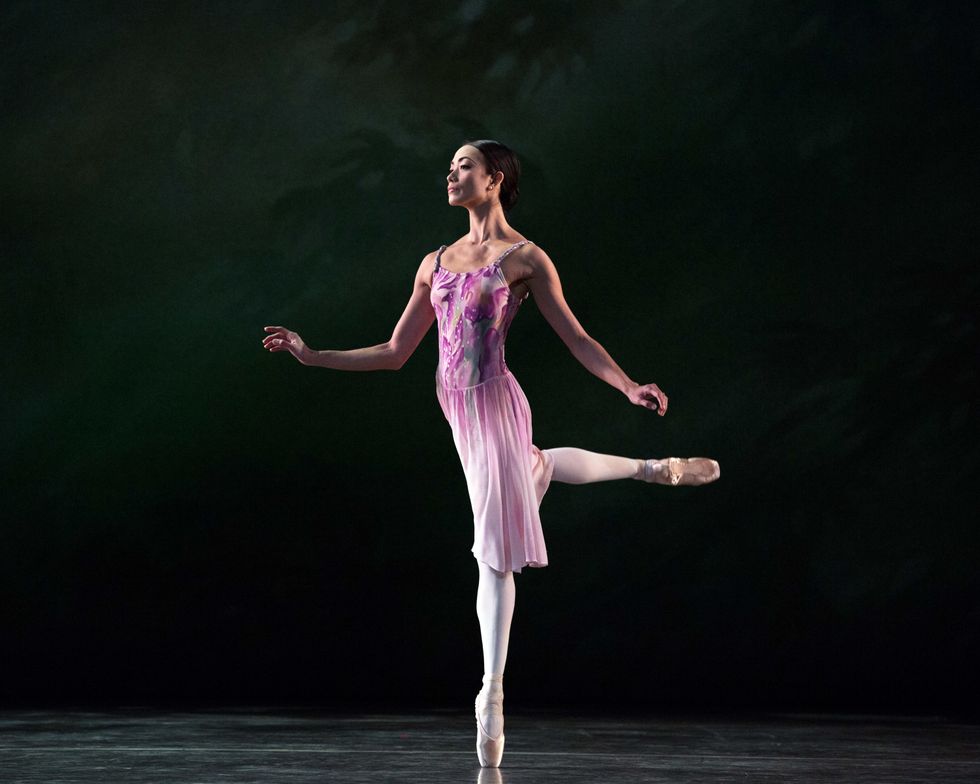 Abrera in "The Leaves Are Fading." Photo by Rosalie O'Connor, Courtesy ABT.

A delicate balance: When the company’s not performing, Pipit-Suksun hops on a stationary bike or StairMaster for 20 to 30 minutes two to three times per week to keep her quads strong and heart rate up. Once rehearsals are in full swing, she scales back. “If I do too much, it could backfire.”

Biggest challenge: “I’m more flexible than strong,” she says, so when her fellow company members stretch between combinations, Pipit-Suksun does bridges to strengthen her glutes and hamstrings.

Afternoon boost: During lunch breaks, she squeezes in Pilates mat exercises if her body needs extra work. “I pick and choose exercises to match what I’m working on at that moment and how my body feels. The ab series is my favorite because that always burns. If I can squeeze that in every day, then I’m good.”

Catching winks: A 30- to 45- minute nap three hours before curtain “puts me into the mental zone.”

Hot and cold recovery: After a show, Pipit-Suksun always ices her right knee for 15 minutes to keep a previous injury in check, and then takes a hot shower to soothe aching muscles.

Pilates secret: She’s prone to hyperextending her knees, but Pilates taught her not to lock into the joints. “If I keep my knees slightly soft, I feel like I’m able to use my inner thighs and glutes more.”

If you like us online, you'll love us in print!
Laura Cappelle

You have incredible flexibility—how has that changed over the years?

I’ve learnt how to use it to say what it can, rather than just flashing it around and being a freak. It’s easier to control now; I’m stronger than I was. It’s become a really amazing tool for me to tell a story.

What is it like playing a bug in The Metamorphosis?

It’s extraordinary because—is he a bug? Is it a metaphor for someone who’s had some kind of breakdown, someone who has a physical deformity? I don’t really think of it as a bug. It’s something that isn’t human, and that’s the absurdity of the whole story.

Do you identify with some of your roles?

I have to be careful because they’re all psychos! There are things in all the MacMillan ballets that I identify with: being a bit of an outsider, that kind of obsessive love. You don’t always realize that there is part of that in you until you’ve done it.

How nervous do you get before a performance?

I normally don’t sleep at all the night before, just from thinking about what I want to achieve. I’m anxious until about 5:30 pm on the day, and then something happens to me. I go, “I’m going to do this.” And I’m fine.

What do you enjoy more: performing or being in the studio?

Performing, but, frustratingly, I’ve actually given some of my best performances in the studio.

Eating out all the time, because I’m the worst cook in the world. I like going to new restaurants, and I’m up for trying anything. I am kind of a foodie—I just don’t want to cook it myself!

I hate them. It’s not that I’m not appreciative, but it’s like you’ve been in this other world, and then you snap back into reality. I have this weird moment when I’m completely overwhelmed. I guess I do secretly love it, but it’s not my reason to dance.

Fit For A Princess: Sterling Hyltin on Dancing Aurora

Creating a dialogue with the music: Hyltin in Aurora's Act I solo (photo by Paul Kolnik)

Aurora's Act I solo in The Sleeping Beauty captures the young princess' girlish exuberance. But from a technical standpoint, its four long minutes almost feel like multiple variations. New York City Ballet principal Sterling Hyltin discusses how to master its many moods and tempos.

In most productions, Aurora's solo follows the Rose Adagio—one of the most stressful moments in classical ballet. Don't let the residual adrenaline throw you off. “It's helpful that the beginning of the variation is slow and controlled," Hyltin says. “I use the first series of balances in arabesque to pull myself together. You can also channel the energy left over from the Rose Adagio—it can help you project the young Aurora's spirit and eagerness."

Become a part of the onstage world

The variation is easier to get through if you interact with the other dancers onstage. “I like to distract myself by thinking about the fact that I'm socializing at my birthday party," Hyltin says. “In theory, the solo is all about Aurora, but I try to make it all about everyone else. You're surrounded by suitors, and they're all playing out their own little story arcs. Recognize each of them, and feed off their energy."

Allow the music to support you

Creating a dialogue with Tchaikovsky's score is especially helpful during the opening arabesques. “You can play with either the ascent or the descent of each arabesque," Hyltin says. “When you're really on your leg, you can alter your phrasing a little to stretch out that moment on pointe. When things don't work out so well, you can luxuriate in the tombé afterward."

Without effective port de bras, the series of hops on pointe on the diagonal can feel overlong. “The footwork there is very simple, so a lot of that moment is about your upper body," Hyltin says. Try gesturing to each of your suitors in turn, or raising first one arm, then the other arm, and finally both to fifth. “Every movement should be elegant and regal, acknowledging your subjects. You want to show that Aurora will be a wonderful queen someday."

Stay on top of the manège

The variation concludes with a challenging manège of rapid coupés jetés and piqué turns, an expression of unbridled joy and energy—which can feel like a shock after the leisurely pace of the preceding sections. “Don't let yourself get behind the music!" Hyltin says. “It's hard because you're exhausted, but if you're trying to catch up going into that last piqué sequence, you'll get way too dizzy. Try to stay slightly ahead of the beat in the coupés jetés." And when you're done, take a deep breath. “After this solo, you almost feel like you're finished with the whole ballet," Hyltin says, laughing. “Some of the hardest parts are right up front. Let yourself relax and enjoy the rest."

There's a warm and fuzzy feeling when dancers you've been following for years finally make it to the top. Of course, just making it into a company is a remarkable accomplishment and something to be proud of. But if there's one thing successful dancers have in common, it's that they never settle. And the corps is great until you're ready to be a soloist...and so on.

Some of my favorite (coincidentally, all American) dancers are climbing the ranks at NBC: Skylar Campbell was promoted to first soloist and Emma Hawes and Kathryn Hosier (a 2014 Star of the Corps) were promoted to second soloist. It's especially gratifying to see dancers—like Alexander Peters and (April/May 2013 cover star) Lauren Lovette—succeed, since Pointe named them as stars very early on in their careers. Congratulations to all the promoted dancers—we can't wait to see you in new roles and opportunities!