In the early years of professional ballet in the United States, influential American dancers played key roles in changing perspectives of ballet as a strictly European art form. Maria Tallchief and Royes Fernandez were among those dancers who helped establish and define an American ballet aesthetic and identity: she as the original prima ballerina of New York City Ballet and he as American Ballet Theatre's Siegfried in the company's first full-length production of Swan Lake. These two exceptional performers are mesmerizing together in this 1963 excerpt from Fokine's Les Sylphide.

Tiler Peck on Making the Lead in "Allegro Brillante" Her Own

"I was particularly excited when I saw my name on casting for Allegro Brillante in 2009," remembers principal dancer Tiler Peck. "Balanchine had said Allegro was, 'everything I know about classical ballet in 13 minutes,' and of course that terrified me." To calm her fear, Peck followed her regular process for debuts: begin by going back to the original performers to get an idea of the quality and feeling of the ballet and ballerina. "It is never to imitate, but rather to surround myself with as much knowledge from the past as I can so that I can find my own way," says Peck.

Keep reading...
If you like us online, you'll love us in print!
Profiles
Caroline Hamilton

Over the years, many companies have premiered works or made their U.S. debut at the Jacob's Pillow Dance Festival, and some of the world's most famous ballet dancers have performed there. This week I will give some more insights from the Pillow's extensive archives into the dancers that have graced this world famous festival's stage. Click on the links below to watch video footage of their performances. 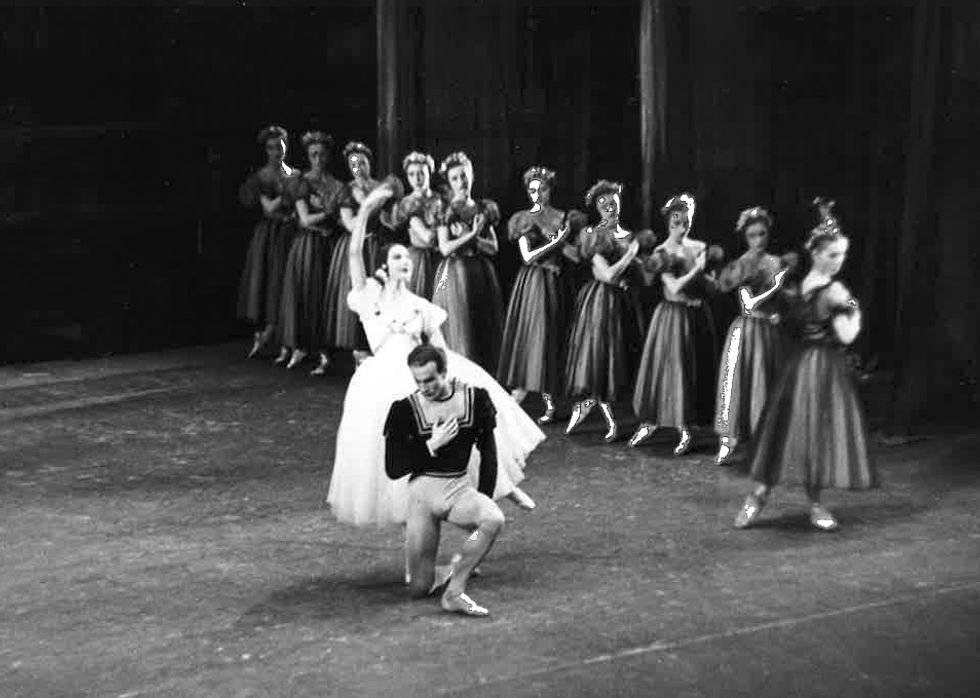 Former New York City Ballet principal Suzanne Farrell is famous as George Balanchine's muse, yet Balanchine wasn't the only choreographer whom she inspired. In 1984 her then-husband, Paul Mejia, also a former NYCB dancer, created a piece for her called Eight by Adler, a jazzy ballet set to the music of Richard Adler. Beginning at 0:45 after a short intro, Farrell performs the first movement in this clip from the ballet's premiere with the Chicago City Ballet.

The slender, long-limbed Farrell saunters across the stage, at moments giving the audience playful smiles and sideways glances. The choreography feels improvisational, befitting Farrell's proclivity for off-balance, suspended movement. With a full jazz band onstage, the music is equally the star in this solo. Even though the slow and sultry piece is a far cry from Balanchine's fast footwork, Farrell's mesmerizing performance in Eight by Adler is a stunning example of Mr. B's famous slogan: "See the music, hear the dance." Happy #ThrowbackThursday!

Courtesy of NewsOK from a 1956 article in The Daily Oklahoman

Yvonne Chouteau, former ballerina with the Ballet Russe de Monte Carlo and one of Oklahoma City Ballet's founding artistic directors, died on Sunday at 86 years old. Chouteau was one of the “Five Moons," five Native American ballerinas from Oklahoma who gained international acclaim in 20th century. (The others' names you might recognize: Marjorie and Maria Tallchief, Rosella Hightower and Moscelyne Larkin.) In this clip from the documentary Ballets Russes, we can see rare footage of Chouteau's luminous stage presence. She seems to bask in the spotlight's glow during the prayer variation in Coppélia, floating across the stage with perfect, tiny bourrées. In the next dance sequence, she swoops low and springs to relevé with such exuberance, you can't help but smile.

Dancer Spotlight: Dancing for Mr. B

Natalia Alonso doesn’t have Maria Tallchief’s black hair or chiseled features. But given Alonso’s dramatic flair, honed at Ballet Hispanico and Complexions Contemporary Ballet, playing—and dancing—the Balanchine ballerina seems well within her reach. No surprise, then, that Alonso was cast as Tallchief in Nikolai and the Others, a new play at Lincoln Center Theater that revolves around Balanchine’s efforts to choreograph Orpheus. “The ballet’s one of Balanchine’s more theatrical works,” Alonso says. “It allows the dancer to explore mood and emotion, and with my background, I love that.”

For Alonso, delving into Tallchief’s character has been the latest step in an adventurous career that has always pushed the ballet boundaries. With her striking looks, expressive line and passionate attack, Alonso has brought her outsized talent to varied repertoire, finding herself as much at home in contemporary work as the ballet idiom. A driving force has been her desire to explore new terrain, which has kept her growing as an artist.

Her original plan was more traditional. Growing up in New York and Long Island, Alonso trained classically, went to Boston Ballet School summer intensives and hoped one day to join a big company. But a knee injury at 17 waylaid her ballet dreams, and she shifted gears to attend Wesleyan University. Eventually, though, she realized she couldn’t see herself doing anything other than dance, and began training intensely when she returned to New York after graduation. She set her sights on Ballet Hispanico, and after four auditions, the company finally hired her. She quickly emerged as one of the lead dancers.

After seven years, in a bold move, she left to join Complexions. The edgy repertoire was a shift, but she met the troupe’s athletic, technically intense demands with grace and ferocity. Though she enjoyed the challenges, after nearly five years, she started to feel restless. “The company does a lot of touring and I was tired of living out of a suitcase,” she says frankly. She also felt hungry for something new. “When I left, it wasn’t because I thought it was time to end my career,” she says. “When the play came up, it was perfect. It fulfilled this classical ballerina I have inside me, while pushing me in a new direction, too.”

In the play, Alonso dances an Orpheus variation and pas de deux. She was coached by Rosemary Dunleavy, a ballet mistress at New York City Ballet who assisted in the audition process with ballet master in chief Peter Martins. “Orpheus uses elements of contemporary and jazz in the movement—it’s not highly technical Balanchine,” Alonso says. “I’m challenged by Balanchine’s expansiveness, which is intrinsically focused on being in pointe shoes, versus them being a secondary thought.” But the acting has proved the bigger stretch. “As a dancer you look at what the choreographer gives you and you copy it. But as an actor, you have to see the context of the scene and then create something yourself. It’s definitely scary.”

Capturing Tallchief’s poise and dignity without mimicking her has been a major focus. Alonso read the ballerina’s autobiography and watched endless clips, but also trusted her own instinct for guidance. “Maria was very disciplined,” says Alonso. “That quality existed with my Russian teachers growing up and I’m bringing that to the part. I’m finding that even without company class, I’m at the theater at 9 am, warming myself up and getting into pointe shoes.”

Alonso hopes to continue her “mishmosh” of ventures, finding fulfillment in being a chameleon. She feels grateful she didn’t follow the standard ballerina path she saw for herself as a teen. “It’s important to always push yourself,” she says. “Even if life throws an injury at you or takes you on a tangent, keep following through. As a young dancer you have a single vision of who you are. But if that doesn’t happen, it’s not over. Don’t limit yourself.”

Favorite role: “Every new ballet I do is my new favorite.”

Ballet idol: Natalia Makarova. “The first time I saw her do Swan Lake, I swore I was watching a swan dance.”