San Francisco Ballet is bringing six works from their Unbound: A Festival of New Works to The Kennedy Center this week. Here, dancers are pictured in Christopher Wheeldon's Bound To. Photo by Erik Tomasson, Courtesy The Kennedy Center.

Keep reading...
If you like us online, you'll love us in print!
Profiles
Margaret Fuhrer

The Standouts of 2017: New York City Ballet in "Rubies"

Ask the Paris Opéra Ballet, the New York City Ballet and the Bolshoi Ballet to share a stage, with each performing one act of Balanchine's Jewels, and you might expect a degree of friendly (or less-than-friendly) competition. But as POB gave its exquisitely polite rendition of "Emeralds" during the Lincoln Center Festival's three-company production this summer, one-upsmanship seemed far from everyone's mind.

Then the curtain rose on New York City Ballet, its dancers visibly shaking with excitement in their "Rubies" finery. And the David H. Koch Theater audience collectively leaned forward. 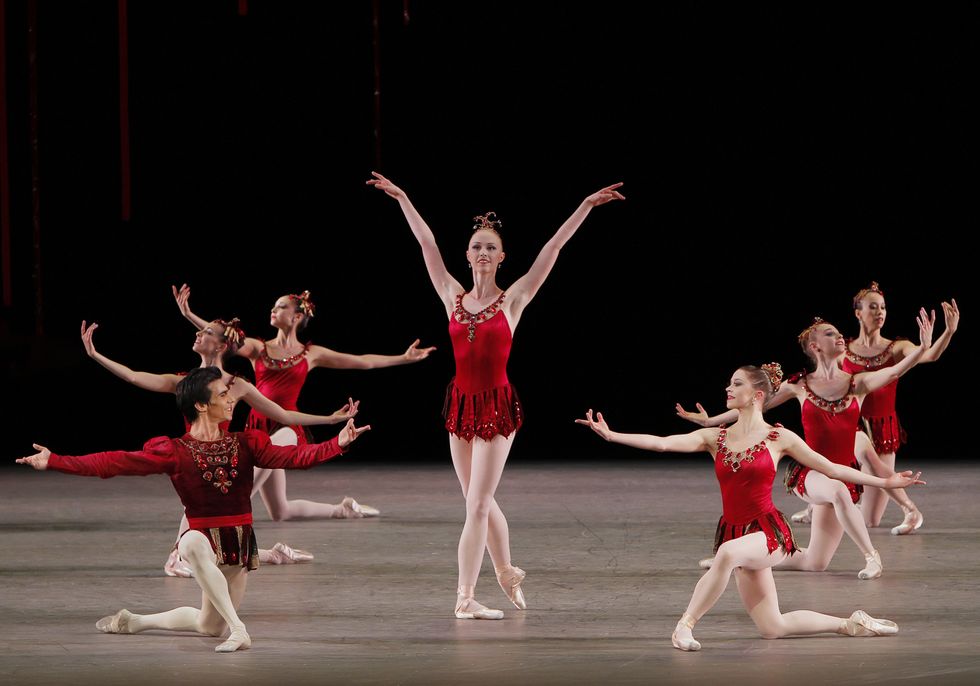 Ballet Movie Night Alert: Catch NYCB's "George Balanchine's The Nutcracker" at a Cinema Near You

Nutcracker season is upon us, with productions popping up in on stages in big cities and small towns around the country. But this year you can catch New York City Ballet's famous version on the silver screen, too. Lincoln Center at the Movies and Screen Vision Media are presenting a limited engagement of NYCB's George Balanchine's The Nutcracker at select cinemas nationwide starting December 2. It stars Ashley Bouder as Dewdrop and Megan Fairchild and Joaquin De Luz as the Sugarplum Fairy and Cavalier.

While nothing beats seeing a live performance (the company's theatrical Nutcracker run opens Friday), the big screen will no doubt magnify some of this production's most breathtaking effects: the Christmas tree that grows to an impressive 40 feet, Marie's magical spinning bed, and the stunning, swirling snow scene. Click here to find a participating movie theater near you—then, go grab some popcorn.

In November, Lincoln Center announced that three of the world's biggest companies—New York City Ballet, Paris Opéra Ballet and the Bolshoi Ballet—would present a collaborative performance of George Balanchine's Jewels July 20–23 in honor of the ballet's 50th anniversary. Each company will take an act, with the Paris Opéra performing "Emeralds" and NYCB and the Bolshoi alternating performances of "Rubies" and "Diamonds." Yesterday, Lincoln Center finally announced what we've all been waiting for: the all-star cast list. (As well as rising stars–Alena Kovaleva and Jacopo Tissi, two young Bolshoi corps members, are slated to dance the leads in "Diamonds" for one performance.) Check out the list below this trailer!

When New York City Ballet went on a three-week tour to Paris last summer, we wished we could tag along. The company presented 20 ballets at the historic Théâtre du Châtelet, including 14 by Balanchine.

Thanks to PBS and their Great Performances series, you can now get a taste of what it was like to be in that audience. The network will air the closing night performance in a two-part broadcast on February 17 (that's tonight!) and February 24, hosted by artistic director Peter Martins.

The lineup features four Balanchine works, all set to the music of French composers—and the casting alone is enough to make you want to tune in.

As told to Amy Brandt by Joaquin De Luz

Prodigal Son is the most important role of my career, and the most challenging. It's not only powerful physically; it takes you on a journey, and hopefully you take the audience with you. It's also pretty elusive; I still haven't found a formula that I'm content with.

The beginning feels most natural to me. I was a bad kid growing up, very rebellious. The son feels oppressed, like no one understands him. He thinks he knows best. That first entrance is full of power, big jumps and energy. That's the easy part. But the value of this role is in the character and the story.

Maria Kochetkova has a voracious appetite for inspiration. A principal dancer with San Francisco Ballet since 2007, she spent the last few years guesting with American Ballet Theatre during their spring season. “ABT is very different from SFB—it has a very different rep, it has very different dancers, incredible dancers you can learn from," says Kochetkova. Last summer, she joined the company as an official principal, taking on a grueling schedule that leaves her shuttling between California and New York.

Seven of my NYCB colleagues and I are heading to Havana, Cuba for the Festival, joining other prestigious companies, including American Ballet Theatre and the Royal Ballet. It's truly a star-studded event! NYCB principals Jared and Tyler Angle are our bosses: They conceived the program, put together the group of dancers and are in charge of making all the last-minute decisions.

Irina Dvorovenko and Joaquin De Luz in On Your Toes. Photo by Joan Marcus.

With its mix of gangsters, vaudeville and ballet, On Your Toes was the first major Broadway musical to incorporate classical dance—courtesy of George Balanchine. One of the 1936 show's numbers is the much-beloved Slaughter on Tenth Avenue, often performed by itself as a standalone ballet. Next month, New York City Center's Encores! revives Rodgers and Hart's On Your Toes, and the cast list, which was just released, includes a few ballet all-stars: American Ballet Theatre principal Irina Dvorovenko as Vera Baronova and New York City Ballet principal Joaquin De Luz as Konstantine Morrosine. "So You Think You Can Dance" alum Alex Wong will perform in the ensemble.

Dvorovenko doing slinky Balanchine in fishnets? Yes, please! Catch one of the seven performances May 8–12.

Inside On Your Toes with Irina Dvorovenko and Joaquin De Luz

Fishnets, gangsters, vaudeville and. . . Balanchine? One of these things may not seem like the others, but dancers know it’s a killer combination. The 1936 Broadway musical Rodgers & Hart’s On Your Toes combines all this, plus song-and-dance tap numbers, and it's currently being reprised at New York City Center May 8-12. At the third vocal and tap rehearsal, Pointe chatted with Irina Dvorovenko and Joaquin De Luz, who star in the show’s famous "Slaughter on Tenth Avenue" ballet. They dished about dancing in heels, capturing the 1930s vibe and making their acting debuts. Watch our exclusive video for an inside interview with these saucy crossover stars.