My Memories of Alicia Before Alonso

Alicia has died. I walked around my apartment feeling her spirit, but knowing something had changed utterly.

My father, the late conductor Benjamin Steinberg, was the first music director of the Ballet de Cuba, as it was called then. I grew up in Vedado on la Calle 1ra y doce in a building called Vista al Mar. My family lived there from 1959 to 1963. My days were filled with watching Alicia teach class, rehearse and dance. She was everything: hilarious, serious, dramatic, passionate and elegiac. You lost yourself and found yourself when you loved her.

For decades the name Alicia Alonso has been virtually synonymous with Ballet Nacional de Cuba, the company she co-founded in Havana in 1948. Alonso died on October 17, just shy of what would have been her 99th birthday. In recent years, she had stepped back from day-to-day decision-making in the company. As if preparing for the future, in January, the company's leading ballerina, 42-year-old Viengsay Valdés, was named deputy director, a job that seems to encompass most of the responsibilities of a traditional director. Now, presumably, she will step into her new role as director of the company. Her debut as curator of the repertory comes in November, when the troupe will perform three mixed bills selected by her at the Gran Teatro de la Habana Alicia Alonso. The following has been translated from a conversation conducted in Spanish, Valdés' native tongue.

Keep reading...
If you like us online, you'll love us in print!
Viral Videos
Julia Guiheen

The Diana and Actaeon pas de deux, from the ballet La Esmeralda, is a bravura tableaux ideal for festivals and galas. In this clip, we see Viengsay Valdés and her frequent partner Romel Frometa perform the piece at Japan's 2006 World Ballet Festival. Valdés, Ballet Nacional de Cuba's prima ballerina and now the company's deputy artistic director, epitomizes the fierce, independent goddess Diana with radiant confidence. Together with Frometa, a current dancer at BalletMet, the two elevate the pas deux to new levels with balletic fireworks that demonstrate their immense strength and trust in one another.

Ballet Nacional of Cuba just named Valdés deputy artistic director, which means she will immediately assume the daily responsibilities of running the company. Alonso, 98, will retain the title of general director, but in practice, Valdés will be the one making all the artistic decisions.

During the Ballet Nacional de Cuba's tour to Washington, DC's Kennedy Center earlier this year, the company brought longtime artistic director Alicia Alonso's Giselle. And while the production was admittedly well-worn and the style of dancing old-fashioned, the dancers rose to the occasion, led sensitively by longtime BNC star Viengsay Valdés in the title role.

Cuba's Gran Teatro de La Habana Alicia Alonso, one of the four theaters in use during the festival. Photo by Quinn Wharton.

Anyone attending the National Ballet of Cuba's biennial Havana International Ballet Festival can expect an adventure that is equal parts treasure hunt and lottery, amidst a cornucopia of choices. This year's festival, the 26th, was no exception, offering 25 programs in four theaters. The event, held October 28-November 6, was also notable for the unanticipated absence of 96-year-old Alicia Alonso, the host company's founder and Cuba's ballerina assoluta. Due to flagging health, Alonso was unable to make her customary opening night appearance, where she would have been seated alongside Cuba's new President, Miguel Díaz-Canel.

Catherine Conley is now a member of the National Ballet of Cuba. Photo courtesy Riley Robinson

This time last year, Catherine Conley was already living a ballet dancer's dream. After an exchange between her home ballet school in Chicago and the Cuban National Ballet School in Havana, she'd been invited to train in Cuba full-time. It was the opportunity of a lifetime, and one that was nearly unheard of for an American dancer. Now, though, Conley has even more exciting news: She's a full-fledged member of the National Ballet of Cuba's corps de ballet. 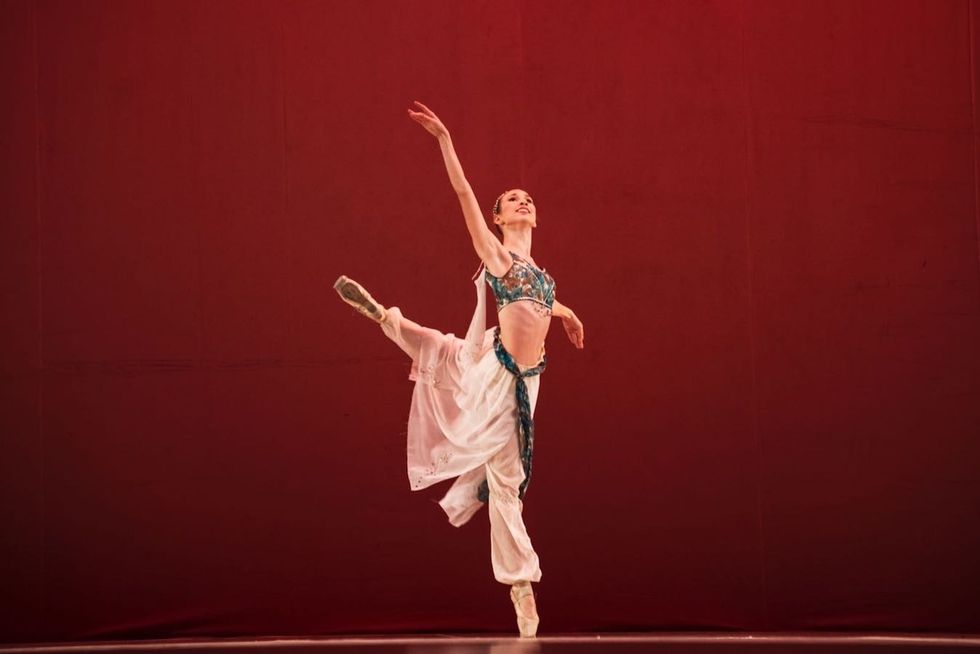 Two Cuban National Ballet Stars Share Their Different Approaches to Giselle, and What They Love About U.S. Audiences

Grettel Morejón and Sadaise Arencibía, principal ballerinas with the National Ballet of Cuba, danced the title role of Giselle in the company's performances on June 6 and 8 at the Saratoga Performing Arts Center in upstate New York. SPAC was the final stop on a U.S. tour that took the company to Tampa, Chicago and Washington, D.C. Morejón's was an intimate, caring, and protective Giselle, placing complete confidence in Albrecht before he becomes her deepest disappointment; Arencibía's was a spectral capture, as present as the Lilac Fairy in Sleeping Beauty, but also the vigilantly mad witness to her own downfall. To say that both interpretations are as distinctive as they are mesmerizing might sound like a false equivalency. Yet, Morejón and Arencibía demonstrate that two vastly different articulations can wax both genuine and stunning, with the same steps to the very same music.

I knocked on their shared dressing room door at SPAC last week, and the welcome from each was as warm as their enthusiastic and forthcoming responses to my questions.

Has the role of Giselle changed over the years since Alicia Alonso created it for the Cuban National Ballet? If so, how?

A few weeks ago we shared that the historic Ballet Nacional de Cuba is back in the U.S. after 40 years. The company has already made stops in Chicago and Tampa, and heads to The Kennedy Center May 29-June 2 as part of the Artes de Cuba festival with performances of Giselle and Don Quixote. The tour will conclude at the Saratoga Performing Arts Center June 6-8. Whether or not the company is heading to a city near you, you can catch a glimpse of Don Q in the below trailer. 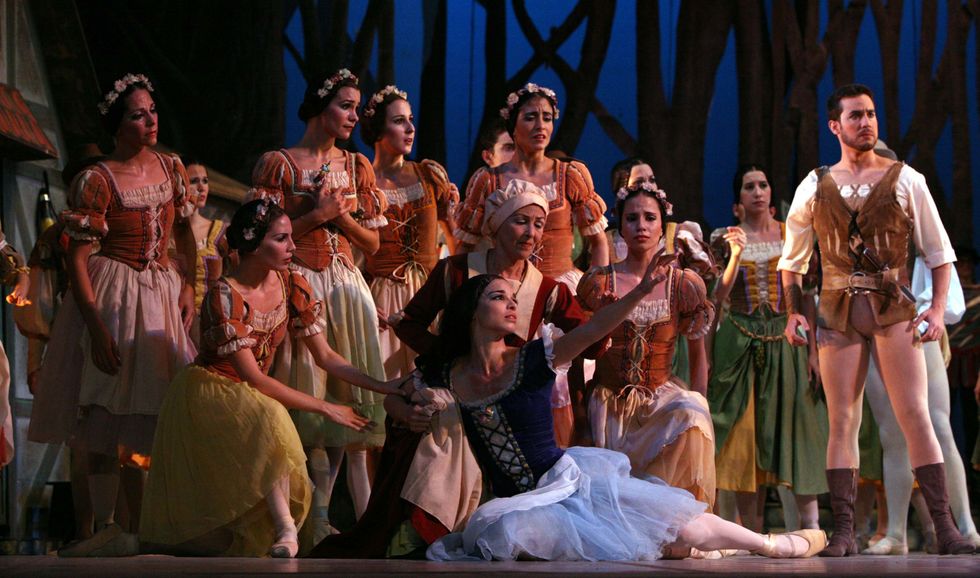 Meet Carlos Hopuy, the Trock Who Will Put Your Pointework to Shame

One of the highlights of New York City's Fall for Dance Festival this year was an appearance by the Ballets Trockadéro de Monte Carlo, a company of men who dance on pointe with as much panache and style as any prima ballerina. Their performance of Paquita was funny, of course—they specialize in comic renditions of classical ballets— but also bracingly well executed. The star of the evening, Carlos Hopuy, aka Alla Snizova, was simply astonishing. His pointework sparkled, his hops on pointe were clean and strong, and he looked like he could have balanced in attitude forever. There was something deeply exciting about the way he combined delicacy and control with the explosive power and steel of a man's physique.

Hopuy, who was born in Havana, Cuba, and trained at the country's famed National Ballet School, has been with the company since 2012. Like all the Trocks, he has both a female and a male alter-ego: when he's not portraying Alla Snizova, he's Innokenti Smoktumuchsky, a dopey cavalier. He is also one of the dancers featured in the upcoming documentary Rebels on Pointe, which will have its theatrical release November 15 (click here for theaters and dates near you). I recently caught up with Hopuy, who, when he's not on tour, lives in Orlando with his husband Paolo Cervellera, a former Trock. We spoke by phone, in Spanish.

Did you always want to dance?

I always liked ballet. My mother, Norma Hopuy, was a principal with the Ballet de Camagüey. I used to hang around the rehearsals. She started giving me lessons at home. Then, when I was nine, I auditioned for the National Ballet School. I had the choice between that and gymnastics and I chose ballet.

When did you start going on pointe?

When I was 11. I would ask my classmates for their old pointe shoes and would try them on at home. When my mother realized that I liked to go on pointe, she started training me and bought me my own pair.

What Do Changing U.S.-Cuba Relations Mean for Cuban Ballet?

“My dream was to dance in Cuba," says Lorena Feijóo. “I didn't want to leave my country." It's a lament the San Francisco Ballet principal shares with countless other members of the Cuban ballet diaspora: dancers who left their families, culture and country behind to escape economic hardship and seek artistic freedom abroad. The diaspora extends from Miami to Seattle to Oslo, where Cuban dancers' superb classical training and refined artistry are sought after.

The problem is not a lack of appreciation at home—“The Cuban audience is absolutely insane about ballet," Feijóo says—but subsistence wages and artistic conservatism at the National Ballet of Cuba, and rigid restrictions on guesting overseas. In Cuba, dancers earn an estimated $30 to $50 per month. However, a balletic revolution may be on the horizon.