Melanie Hamrick Is Saying Goodbye to American Ballet Theatre, but Has Big Plans for the Future

Melanie Hamrick has been an undeniable force in American Ballet Theatre's corps de ballet for the past 15 years (16 if you count her time in the Studio Company, she points out). Her technical precision, combined with her luxurious quality of drawing each step out so that it melts into the next, has made her a standout whether she's dancing a featured role or in a corps of swans. On Saturday, she'll take her final bow with the company in Balanchine's Theme and Variations, with just a tiny bit of nerves. "I've always been a calm performer, but this fall season I've been quite nervous," she explained after rehearsal on Thursday. "I want to take in every moment and really enjoy it. I got quite emotional earlier this week because I'm going to miss my friends," she says, adding, "But I'm excited for the next chapter."

That next chapter includes spending time with her partner, Rolling Stones frontman Mick Jagger, and their son. But she's not retiring from dance completely. Hamrick has a growing interest in creating her own work, having made her choreographic debut earlier this year with Porte Rouge. The piece, which featured music by the Rolling Stones, had its premiere in Russia at the Mariinsky Theatre's Creative Workshop of Young Choreographers and later at Youth America Grand Prix's Stars of Today Meet the Stars of Tomorrow Gala. "I had a lot of fun with that process, and I'm looking forward to working on choreography and developing new ideas." Read on for more about her ambitious new plans, her thoughts on dancing and motherhood, and her advice for young dancers in the corps.

Why did you decide to retire now?

I enjoy dancing and I enjoy the performance aspect, but over the past year, it was hard for me to stay motivated on layoffs. And I was like, "Maybe this is a sign." And then I got so excited when I choreographed Porte Rouge. I had this new motivation and thought that I could enjoy trying out some other styles. I started taking contemporary and hip-hop classes last year. It was so funny to be in the back of the class in my sneakers for hip-hop, but it made me smile. I love ballet so much, but over the last year it was becoming a chore to be in ballet class. And I don't ever want to feel that way or lose my love of it. I wanted to leave on a high note and while I'm happy. 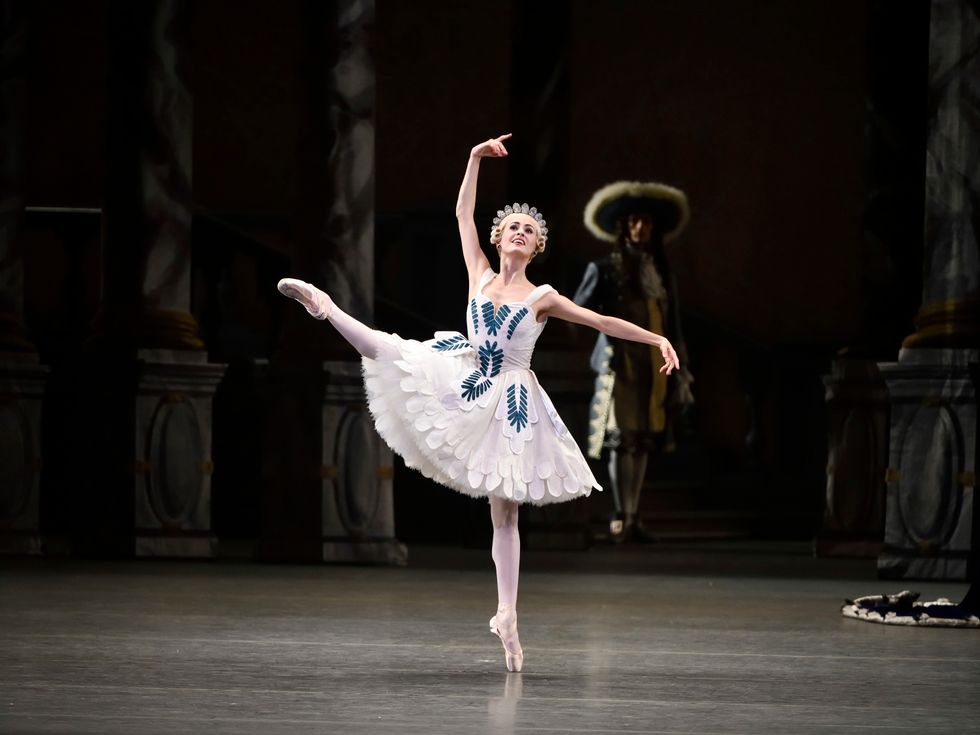 Hamrick as the Fairy Candide in Alexei Ratmansky's The Sleeping Beauty.

Do you have a favorite role you've performed with ABT?

I love Apollo and Caroline in Lilac Garden and Olympia in Lady of the Camellias. I think it's been 10 years since we performed Lady of the Camellias, but I loved dancing Olympia so much because it was such an acting role, and the costumes were so beautiful. It was a full-length, and I felt like I could really get into a character. I went and saw the opera, La Traviata, I read the book, it was the whole process that was quite cool.

How has becoming a mother influenced your dancing?

I used to analyze every step, and then when I had my son, I was like, "I don't have time to analyze, I need to get onstage." I would be showing up an hour before the show and just barely getting ready in time and thinking, "Well, I've got to trust myself that I know it." I enjoyed not overanalyzing anymore, because I think sometimes you lose the fun when you go too deep. 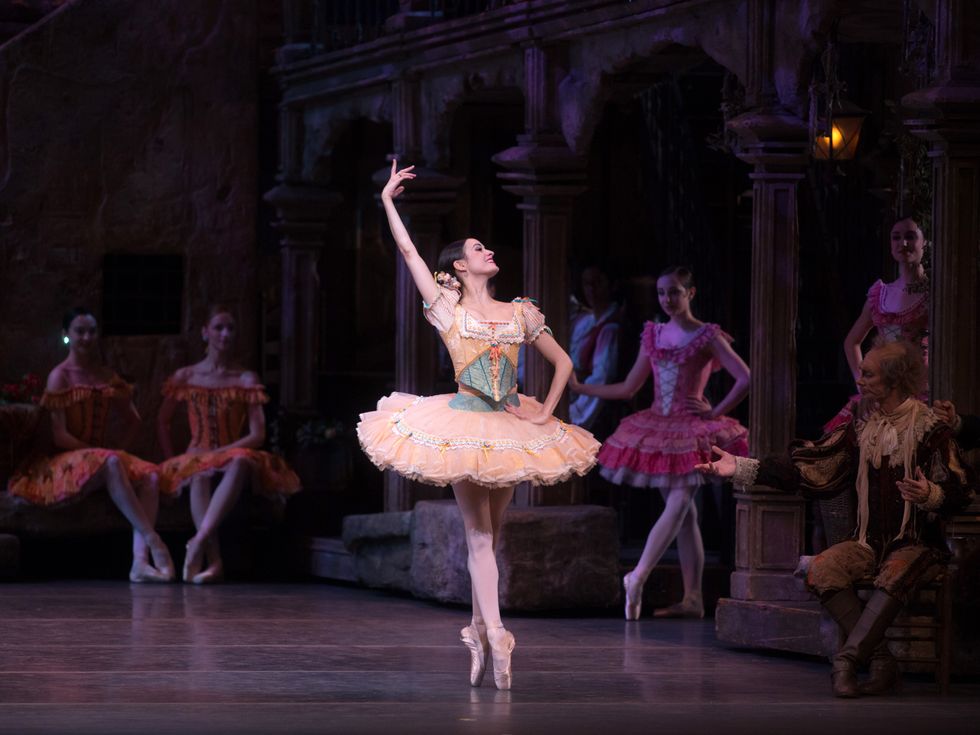 Hamrick as a Flower Girl in Don Quixote.

What will you miss most about dancing with ABT?

I'll miss the dancers—that day-to-day camaraderie with people who share the same passion you do, and their feet hurting as much as your feet are hurting. It's really special. Everyone says, "ABT family," and people kind of giggle, but it really is.

I'm going to choreograph, and I'm also getting into the creative direction. I can't say much about it yet, but I'm developing a new project that's like a rock-dance festival with Joanna DeFelice, who choreographed Porte Rouge with me earlier this year. It was fun to be at the Mariinsky Theater in Russia and to see people wearing Rolling Stones T-shirts in the audience who had never been to the ballet before. I loved that idea, of making ballet more accessible. After you go to a concert at Madison Square Garden, you walk away and you're hyped up and you want to go dancing. I want people to feel like that with ballet and dance. I want to develop it with fashion, art, music, and dance, so that maybe it won't be the dance aspect that pulls people to the theater, maybe it will be fashion, for instance. It's a big project and it's risky because it hasn't really been done before, but hopefully we can make it work. 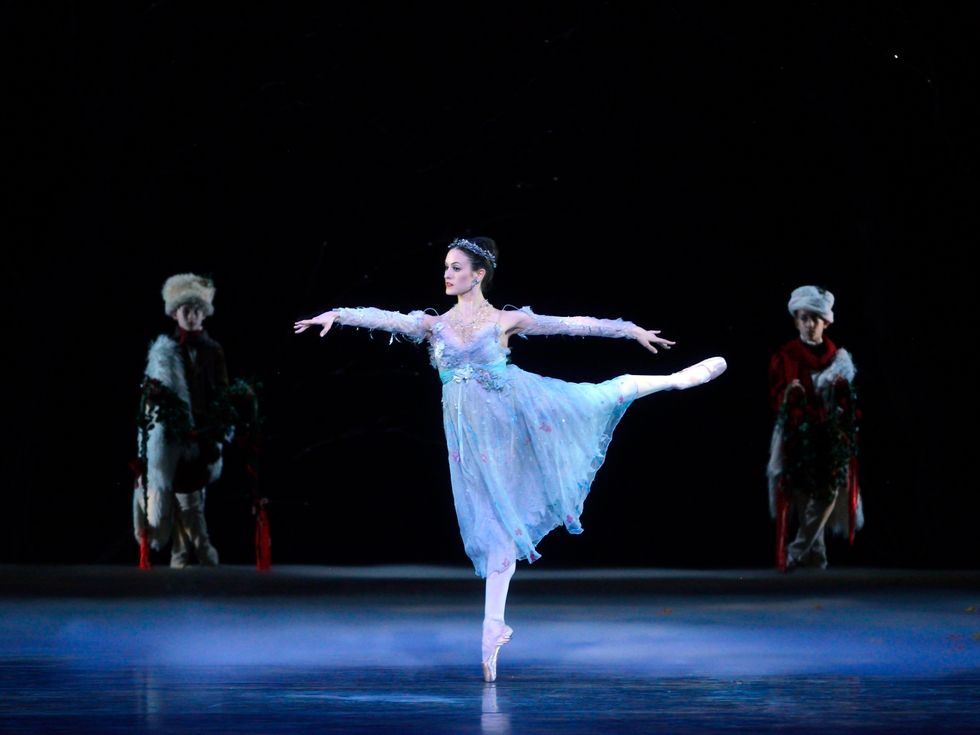 Hamrick as the Winter Fairy in Sir Frederick Ashton's Cinderella.

What are you looking forward to most about retiring?

I'd really like to develop my skills as a choreographer. And, of course, I'm looking forward to spending time with my son and my partner and just enjoying life a little bit. It'll be my first time in 20 years not doing Nutcracker, so that might feel weird, but it will be nice to enjoy December. It's such a beautiful time in the city, and I'm looking forward to being with my son and taking him to different shows.

Do you have any advice for young dancers?

Don't try to fit into a mold. The corps de ballet is so beautiful and wonderful, and while the beauty of it is dancing in unison, keep your uniqueness. When I was young, I took so much on—I wanted to make this person happy and that person happy—that I sometimes lost what was special about me. Don't lose sight of that. Trust your instincts and work hard, but remember it's okay if you have a bad couple of days. Go to the movies, take a deep breath, relax, and go back in fresh.

melanie hamrick american ballet theatre
If you like us online, you'll love us in print!
Instagram
Pointe Magazine