Petipa at 200: Why the 19th-Century Choreographer's Works Still Speak To Us Today

Two hundred is the new 30. Or at least it seems so for Marius Petipa, whose ballets are as active as ever as we celebrate his 200th birthday this year.

Nearly all major ballet companies dance Petipa's iconic ballets, which reflect his prolific creative output. And they are heavy hitters: Swan Lake, La Bayadère, Le Corsaire, Don Quixote, The Nutcracker, Paquita, The Pharaoh's Daughter, Raymonda and The Sleeping Beauty, to name just a few of the 50-plus ballets he choreographed. He also revived and reworked earlier productions of Coppélia, La Fille mal gardée and Giselle. During American Ballet Theatre's 2018 spring season, five out of its eight weeks will be attributable to Petipa, including the debut of artist in residence Alexei Ratmansky's newly reconstructed Harlequinade. 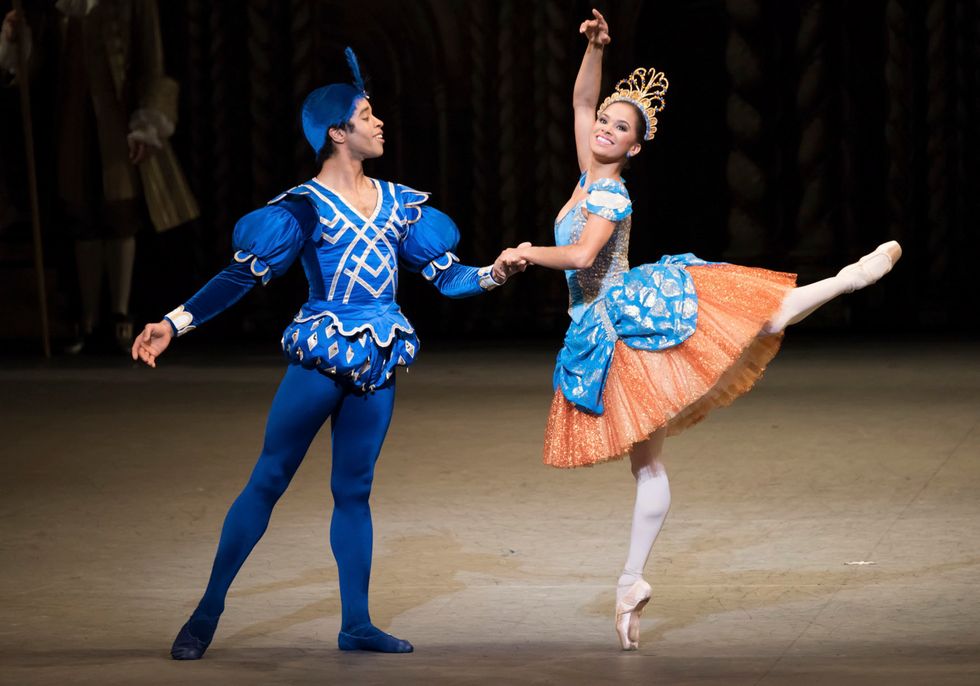 Gabe Stone Shayer and Misty Copeland in "The Sleeping Beauty." Photo by Doug Gifford, Courtesy ABT.

So what makes him "The Dude"—maybe even more popular and certainly more widely known in the 21st century than in the 19th? His works are not only classical ballets, but also classics. Even in short excerpts, they remain powerful. Petipa's variations represent the gold standard at most ballet competitions, because they test dancers to the full range of their classical technique, musicality and artistic expression.

And what makes them classics? "Petipa's ballet step-sequences are simple, logical and organic," says Larissa Saveliev, the former Bolshoi Ballet dancer who founded the Youth America Grand Prix in 1999 with her husband, Gennadi. "But they are so perfectly matched to music and so well composed together, that this beauty becomes timeless and captivates our imagination as much today as it did when they were first choreographed."

Former ABT ballerina Cynthia Harvey, who danced many of the great Petipa roles and now heads the ABT Jacqueline Kennedy Onassis School, lauds Petipa for using his knowledge of ballet training to elevate the choreography: "He really pushed the male dancer's role to have greater importance—using bravura steps for the first time, as well as capitalizing on the ballerina's abilities." 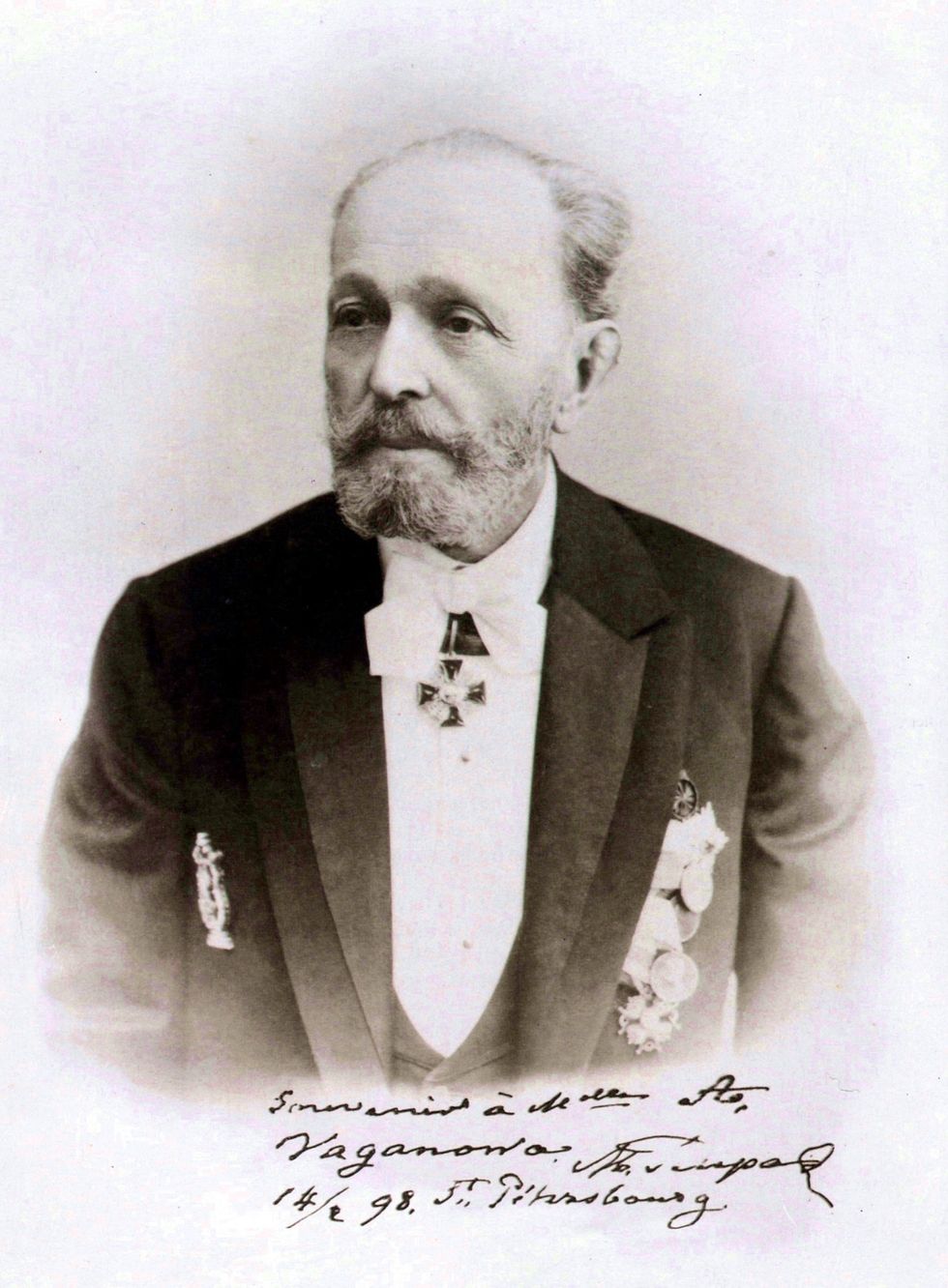 If classical ballet technique comprised the spine of his work, Petipa's artistry imbued a rapturous soul into the art form. "Petipa had a gift for storytelling and a sense of imagination and poetry," says Harvey. "His structure with big ensemble dances suited the Imperial Ballet and brought them to new heights. His storytelling and use of symphonic orchestrations for his creations captured the attention of the culture of Russia at that time."

Petipa was born in Marseille, France, the son of a famous ballet master. He studied intensively with the legendary teacher Auguste Vestris and later danced with the Grand Théâtre in Bordeaux, often partnering Carlotta Grisi. In 1847, he became the premier danseur of the Imperial (now Mariinsky) Theatre of St. Petersburg. During his dance career, he helped Jules Perrot and others restage older works. Petipa then began choreographing himself, eventually becoming the premier maître de ballet of the Imperial Theatre. His first seminal success was with The Pharaoh's Daughter in 1862, followed by La Bayadère in 1877. His work with ballet master Lev Ivanov, who specialized in choreographing for the corps de ballet, cemented his legacy. His last ballet was completed in 1905, five years before his death. In one of his final diary entries, Petipa wrote, "I can state that I created a ballet company of which everyone said: St. Petersburg has the greatest ballet in all Europe." 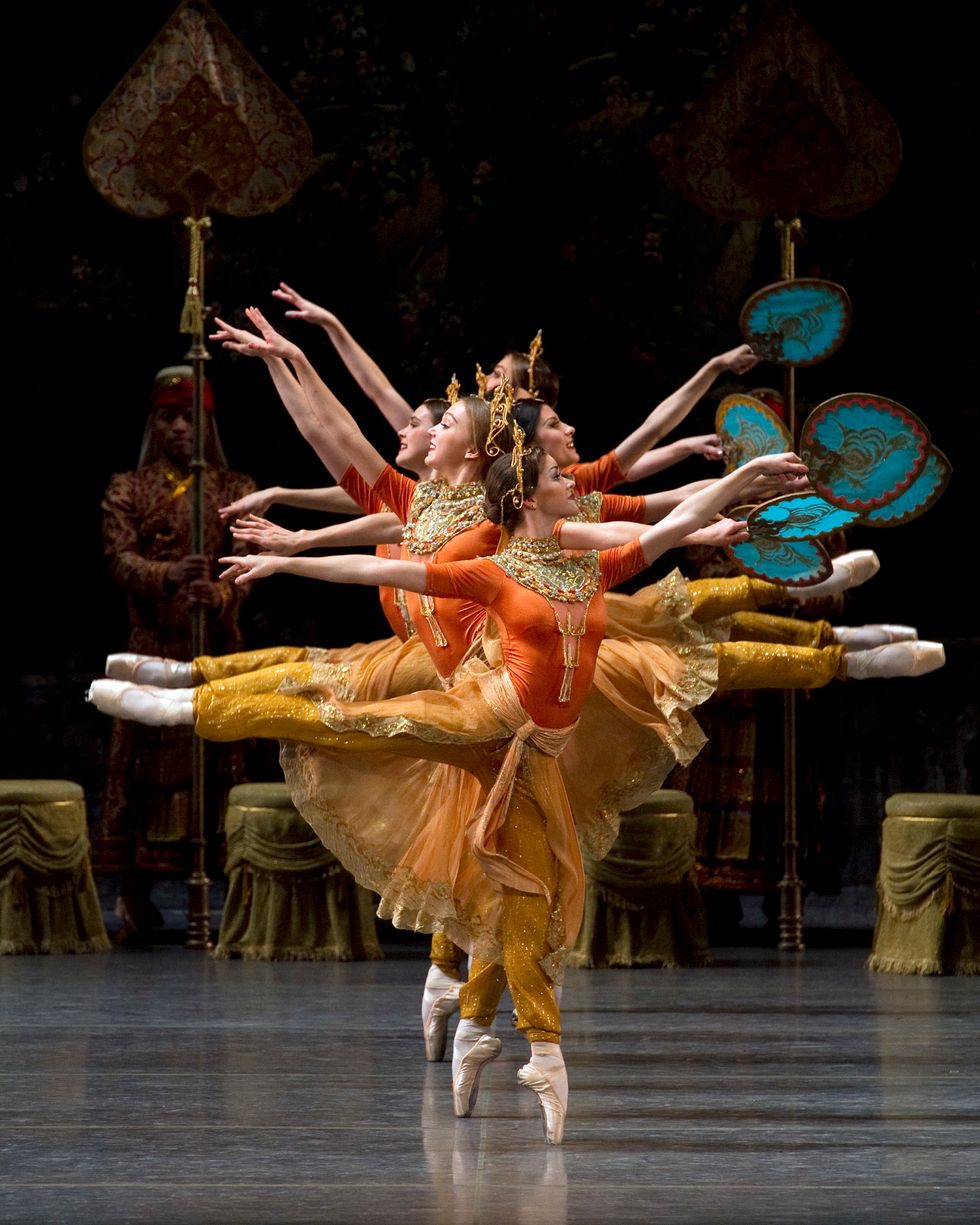 Members of ABT in a scene from "La Bayadère." Photo by Gene Schiavone, Courtesy ABT.

When ballerina Valentina Kozlova danced with the Bolshoi Ballet in the Soviet Union, she discovered a black-market silent film with subtitles of Petipa teaching ballet class. She realized he was saying the same things about the refinement of training that she had learned in her Vaganova studies. The enormously influential teacher Agrippina Vaganova, often called the "Queen of Variations," worked closely with Petipa and performed at the Mariinsky until 1916. She began teaching in 1921 and codified the Russian technique. "[Vaganova] says you should do less to appear that you are doing more," says Kozlova, who later became a principal with New York City Ballet and then founded the Valentina Kozlova International Ballet Competition. "One part of our training that comes from Petipa is that women have to be extremely light in their steps. He created the épaulement—the beautiful turn of head and neck—and expressions of your arms and hands that is disappearing today."

Petipa's ingenious approach to music also makes his choreography worth dancing and watching today. While he collaborated with many composers, it was with Tchaikovsky that he made pure magic. Think of the sweeping graciousness of the Lilac Fairy's variation or the exhilaration of the Rose Adagio. Petipa and Tchaikovsky worked closely with librettists to properly convey the desired theatricality and knew how to shape phrases. "In these classics, you dance by phrase, but not by count," says Kozlova. "You should be on the music, but it also gives you freedom to move by phrase."Another reason that Petipa stays in vogue: Ballet dancers love the challenges. Performing Aurora, Kitri or Odette/Odile is akin to a climb up Mt. Everest. You can't fake the requisite technique and artistry. (He often choreographed different versions of his variations for different ballerinas with varying strengths, which is why you will see several versions of the Black Swan variation.) "Petipa's ballets are like a litmus test to reveal your training," says Saveliev. "You can hide or work around your shortcomings in some others' work. But with Petipa, you can't." 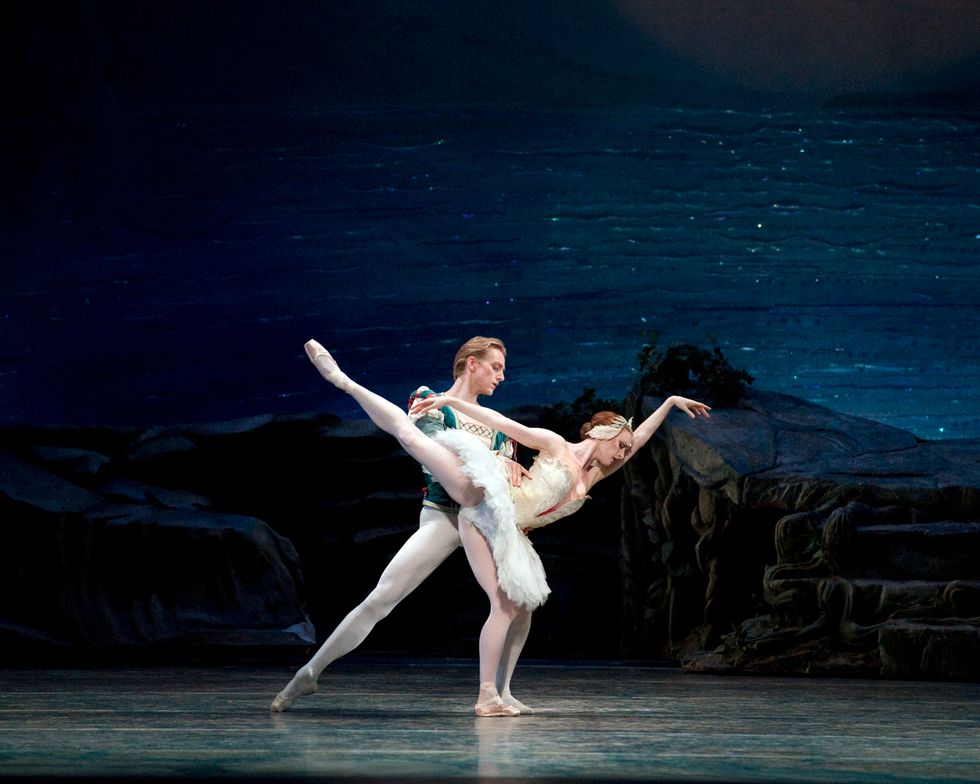 Learning to engage the entire body is often the greatest challenge. "There is this perfect balance between the gracefulness of the upper body and the strength and precision of your legs," says Saveliev. "Today, dancers often concentrate on jumps, tours and footwork—and they sometimes do not pay enough attention to the upper body. But the true beauty of Petipa's choreography is in a perfect combination of both."

What is also built into his choreography is the full expression of the characters. They tell the story of who they are, what they fear, love or loathe, and what they desire through their steps and mime. Think of the innocence and joy of Aurora's Act I variation, the command and regality of Raymonda's "clap" variation or the Bluebird's gravity-snubbing ballon. The dynamics of character development and storytelling are enormous. Audiences feel that.

Although Petipa's ballets have been restaged and adapted over time, there have been recent attempts to restore them to their original versions. Alexei Ratmansky and his wife, Tatiana, have used the Stepanov notations from the Sergeyev Collection at the Harvard Theatre Collection at Houghton Library to reconstruct The Sleeping Beauty for ABT, as well as Swan Lake and Paquita in Europe. Their newly reconstructed Harlequinade for ABT debuts June 4 at Lincoln Center. 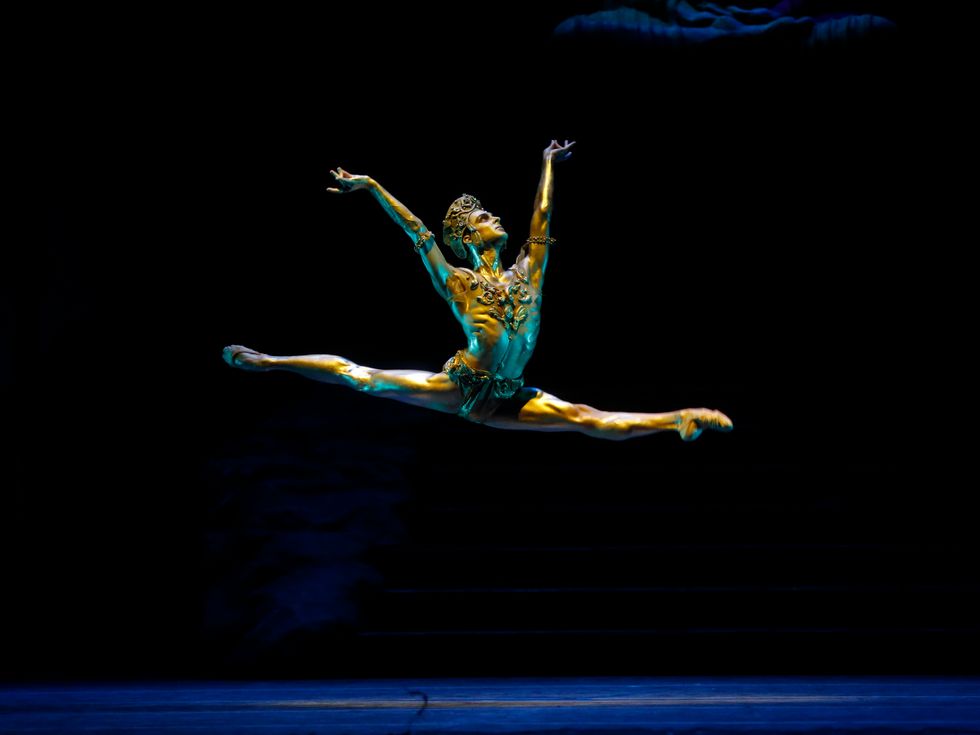 Joseph Gorak as the Bronze Idol in ABT's production of "La Bayadère." Photo by Mary Sohl, Courtesy ABT.

Some complain that the classical warhorses are not moving ballet forward in this century. And there are archaic, sometimes uncomfortable images (the peddling of slave girls in Le Corsaire) and stereotypes (The Nutcracker's ethnocentric national dances) in Petipa's work. Nonetheless, plenty of choreographers are still happy to create works "after Petipa," because the frameworks of his ballets are so sturdy and the stories still resonate.

"Most of these ballets are based on stories of a historic romantic ideal, and a certain innocence—boy meets girl (or swan), love has obstacles, love conquers all," says Harvey. Today's audiences crave a dose of innocence along with their desire for escapism.

Petipa, as they say in marketing, is box office gold. That not only pays for a lot of pointe shoes, but also, through these enchanting story ballets, piques the imagination of the next generation.