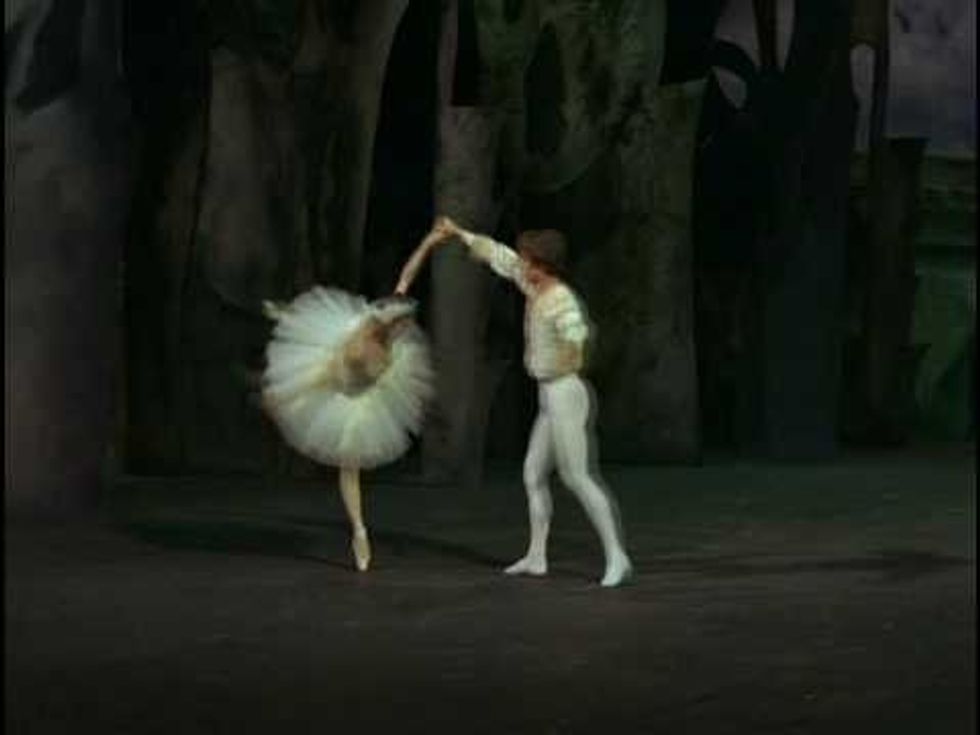 Jonathan Reeves: “Well, when Margot Fonteyn was onstage, you couldn't tear your eyes away from her."

YouTube wasn't yet invented when the movie Center Stage was released. But thanks to the wonders of the internet, we (who weren't lucky enough to see the great British ballerina in person) can observe exactly what Peter Gallagher's character was talking about.

Fonteyn appears with Rudolf Nureyev in this clip from Swan Lake, filmed at the Vienna State Opera in 1966. Whereas Act II's iconic White Swan pas de deux displays a tentative love blossoming between the swan queen and her prince, here—in the last act's pas de deux—there is more trust between them. And much more sadness. Siegfried has betrayed Odette, enchaining her in her curse. Fonteyn and Nureyev, as luminous as their reputations promise, dance as one: joined in the tragedy of their characters' impending fate.

Fonteyn and Nureyev's partnership began when she was 42 and he was just 23. Named a Dame of the Order of the British Empire in 1956, Fonteyn was also one of few people given the title "prima ballerina assoluta" in the 20th century. Nureyev's career spanned continents, TV screens and company roles. From 1983−1989, he served as director of the Paris Opéra Ballet, which still presents his restaging of classical ballets. Eminent dancers and public figures in their own right, together, they are transcendent. Happy #ThrowbackThursday!

Ask Amy: How to Find the Right Pointe Shoes if One Foot is More Flexible Than the Other

I'm 14, and I feel totally stable and on my box on my right foot on pointe. But my left foot? Not so much. How can I fix the problem of being on one box and not all the way on the other? —Summer

I was 4 years old when I took my first ballet lesson. My mom had dressed me in a pink leotard with matching tights, skirt and slippers. She drove me on a Saturday morning to a ballet academy in downtown Caguas, the town in Puerto Rico where I grew up. I don't remember much from the first lesson, but I do recall the reverence. My teacher Mónica asked the class if someone wanted to volunteer to lead. She was surprised I—the new girl—was the one to raise my hand.

I made up most of the steps, mimicking the ballerinas I had seen on TV and videos. At one point, Mónica stepped in and asked me to lead the class in a bow. I followed her directions and curtseyed in front of the mirror with one leg behind me and a gentle nod. I looked up to find myself in awe of what I had just done.

This was the same feeling I had when, after years away from dance, I finished my first YouTube ballet class at home in the midst of the coronavirus pandemic.

Join Memoirs of Blacks in Ballet for Its 2020 Virtual Symposium

Memoirs of Blacks in Ballet, founded in 2015 by writer and activist Theresa Ruth Howard to preserve and promote the stories of Black ballet dancers, is offering three weekends of interactive education and conversation this month through its 2020 Virtual Symposium. The conference, titled "Education, Communication, Restoration," encourages participants to engage in candid discussions concerning racial inequality and social justice in ballet. While it is a space that centers on Blackness, all are welcome. Held August 14, 15, 21, 22 and 28, MoBBallet's second annual symposium will allow dancers to receive mentorship and openly speak about their personal experiences in a safe and empowering environment.

The first event, For Us By Us (FUBU) Town Hall, is a free community discussion on August 14 from 3:30–4:30 pm EDT via Zoom, followed by a forum for ballet leadership. The town hall format encourages active engagement (participants can raise their hands and respond in real time), but the registration invoice also contains a form for submitting questions in advance. The following discussions, forums and presentations include topics like company life as a Black dancer, developing personal activism, issues of equity and colorism in ballet companies, and more. Tickets range from free to $12 for each 60- to 80-minute event.

Ask Amy: How to Find the Right Pointe Shoes if One Foot is More Flexible Than the Other

Join Memoirs of Blacks in Ballet for Its 2020 Virtual Symposium