My Way Back to Ballet: Kathryn Morgan on Her Slow-But-Steady Return to Dance After an Unexpected Illness

Kathryn Morgan was one of New York City Ballet's most promising soloists, until her career was sidelined by hypothyroidism. In 2012, after two years of unexplained energy loss and headaches, and rapidly gaining 40 pounds, she left the company and returned home to Alabama to focus on her health. But she found her way back to ballet on her own terms, starting a popular blog and YouTube channel that over 32,000 subscribers use as a resource. Now, she's dancing again—most recently starring in To Dance, a musical about ballet dancers in Cold War Russia that premiered at FringeNYC; and touring with Ballet in the City, an organization that presents professional ballet performances across the U.S. With more opportunities on the horizon, she spoke with Pointe editor Amy Brandt about calling the shots in her career. —Suzannah Friscia

What was it like after you left NYCB and moved back home?

I had begun to hate ballet. I had begun to not even want to show my face and dance. So when I left, to my surprise it was a huge relief at first. But then the depression set in. That wave of relief brought on an even worse onslaught of medical problems—once the pressure was off, my body blew up, my hair fell out. I started to miss dancing and thought the thing I'd wanted to do forever was gone. My parents would say, “What do you want to do instead?" and I didn't have an answer. It took probably another year or two before I started to want to get back into it or thought that I could.

Did you completely take a break from dance during that time?

My ballet school had a regional company attached to it in Alabama. They were so kind and let me perform, so I danced the full-length Swan Lake, I did Nutcracker, I did a full-length Snow White—sick as a dog! During that time, I also started teaching.

At what point did you say, I can actually make this happen again in my own way?

Last May I started watching YouTube videos and it occurred to me—there are no ballet dancers on YouTube. And to my 15-year-old self, ballet was so secretive. There wasn't even anybody to help me tie my first pair of pointe shoes. I wanted to help other students because ballet is a very selfish industry. I also realized that I was not under a company, and wouldn't have to answer to anybody. So I thought, Let's just try it. I did a couple of makeup tutorials, and I explained what I was going through—rumors had been circling that I was fired. And a year and a couple months later, I've got over 32,000 subscribers and growing. 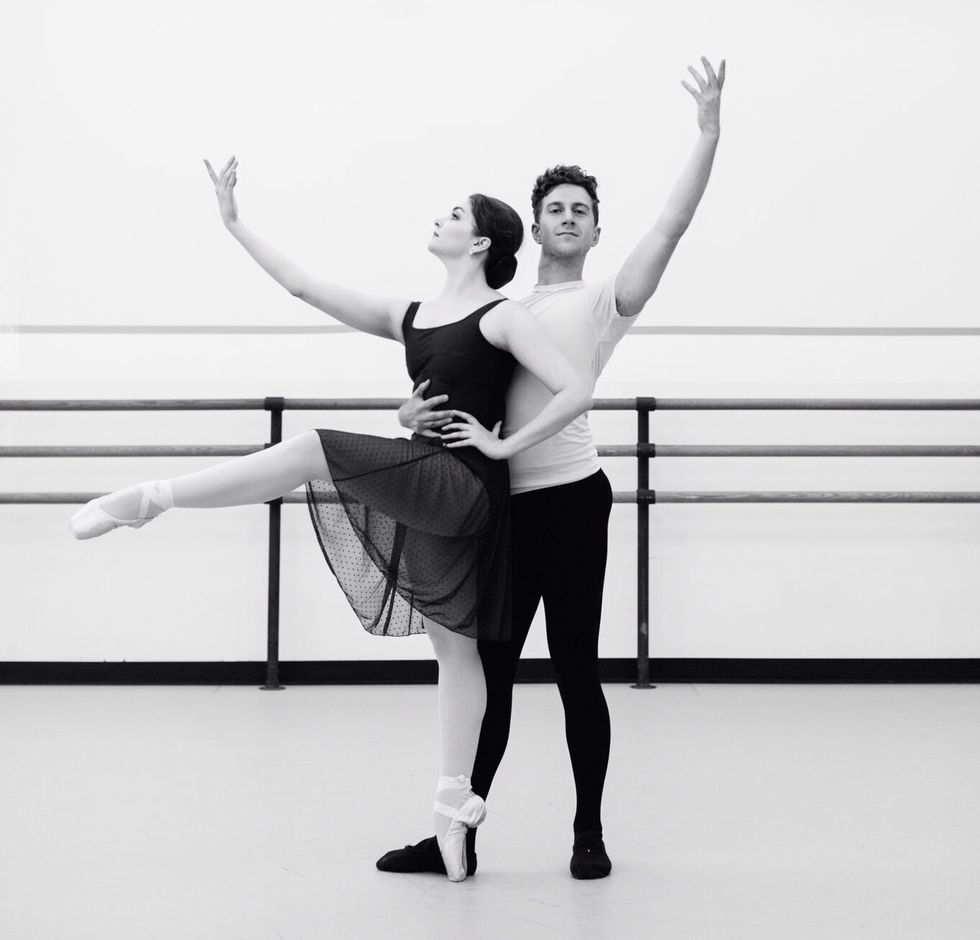 Morgan with her "To Dance" costar, Jesse Carrey, in the studio. Photo by Erin Kestenbaum, Courtesy Morgan.

You now write an advice column for Dance Spirit. Between that and your online persona, do you feel pressure to always have an answer?

For me the biggest thing is to tell the truth. And I have no problem sharing my own struggles. I'm not a person who has to appear perfect. I definitely feel a responsibility not to lead young dancers astray and say, “Everything in the ballet world is wonderful and it's easy." I love the mysteries of the ballet world and the glamour of it. But at the same time the world is changing, and ballet could be a dying art if we don't keep up with that. I'm all about, Okay, let's pull back the curtain, let's get on YouTube, let's share this with dancers.

How do you manage the workload? Do you have anyone helping you?

I don't have anybody helping me! I do all the editing and uploading myself. I do need some assistance going forward. But I love it.

Since you've started these projects, how much do you feel you've grown as a person and a dancer?

My life has completely changed, because now I know why I do this. What I hear most often is “You're such an inspiration," and that to me is so…not only touching, but also encouraging. I might not be at New York City Ballet anymore, but I can do something totally different and still be an inspiration to students, and show them that even if you're going through something horrible, you can come out of it. It's been an outlet for me. I started it when I was still very, very sick, and it's made me feel relevant again.

You followed a very traditional path at first. Now that you're freelancing, you have to make your own decisions. What's that like?

After several years in a company, you start to feel like you're not doing it for you anymore—you have to please the director. Now I'm doing this for me. It's a choice I've made. I love writing my own rules, I love being able to look into projects that genuinely interest me, like this musical that just came up. I feel like I'm dancing better now than I ever have before. Each day that I get to dance is such a gift; it's not “I have to get up, I have to go to class." It's completely reawakened my love for dance.

What is your relationship with your body now?

For a long time I hated it. I would only ever look at old pictures of myself at City Ballet and think, I have to look like that again. Now, I'm much more accepting of it. My weight is coming off at a slower rate, but I'm okay with the fact that I may never weigh what I used to. I'm not going to jeopardize my health to get there.

A lot of people ask me if I want to join a company—I can't say yes or no to that. If it's the right company at the right time, maybe. I haven't auditioned yet because I'm not in ballerina-thin shape. But I'm loving pursuing more avenues than just ballet. I'm really enjoying the acting; my best roles at City Ballet were always the acting ones. I have an app out now, and a couple projects coming up. I'm open to anything. I like calling my own shots.

What would your advice be for someone who is going through a really discouraging time?

First, that you're not alone. Everybody—even famous dancers—has something they're dealing with, and nobody's path is the same. Also that you can have success in many, many other areas of your life. And if you're struggling and decide that ballet is something you don't want to fight for, it's totally okay! But if you do want to fight for it, know that if you believe in yourself, it's going to get better. You just have to know why you do it.