For many dancers, it's a familiar story: A young girl dreams of becoming a ballerina. She's talented—very talented, in fact—but her body doesn't fit the ballet type. She's never quite thin enough; her legs are too bulky, her torso too short. She works hard, because she wants it desperately. But she can't change the realities of the ballet world. And it's not a friendly place for dancers who look like her.

This is the story of Bettina “Boo" Jordan, the unexpected heroine of ABC Family's “Bunheads," currently in the second half of its debut season. It's also the story of Kaitlyn Jenkins, the 20-year-old actress who plays Boo. Before being cast as Boo, Jenkins had quietly decided to table her dance dreams. But thanks to “Bunheads," she's now a professional dancer—not to mention an up-and-coming actress.

“Bunheads," created by Amy Sherman-Palladino, isn't universally beloved by ballet fans. When it hits its stride, however, it's a bewitchingly madcap confection. There's plenty of rapid-fire banter and a gaggle of quirky small-town characters, familiar to fans of Sherman-Palladino's “Gilmore Girls." There are fantastically nutty dance numbers—including a reimagining of The Nutcracker's battle scene as a Wall Street showdown, with shades of Kurt Jooss' The Green Table—choreographed by Los Angeles heavy-hitter Marguerite Derricks. There are also two big Broadway stars: Sutton Foster, who plays former Vegas showgirl Michelle Simms, and Kelly Bishop, as hard-nosed ballet studio owner Fanny Flowers. 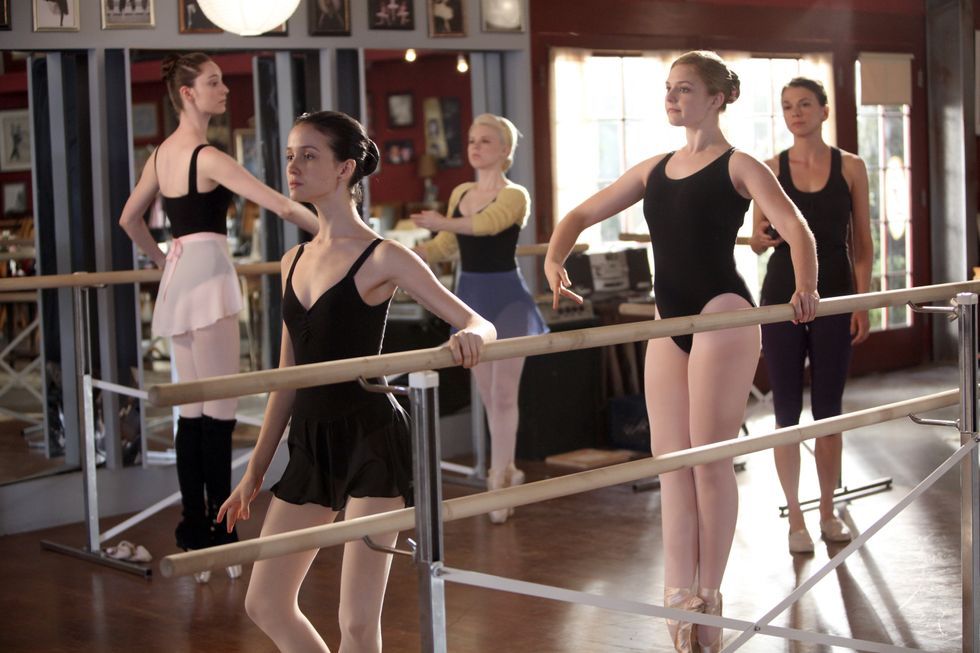 But despite all that starpower, it's Jenkins' sweet, earnest Boo who speaks most directly to the show's ballet fans. “We had to have a Boo on the show because she's real—not everyone is cut out to do exactly what they want to do," Sherman-Palladino says. “Somebody has to tell Boo, 'You have a tummy, your legs are too big, and maybe you should put the sandwich down.' Because in ballet, that will happen, whether it's right or wrong."

Though “Bunheads" is not, as Sherman-Palladino is quick to point out, an issue-driven show, it's pop culture's head-on confrontation of the ballet body problem. And Boo—played with sensitivity by Jenkins, who has lived many of her character's experiences—inspires because she's ultimately unfazed by what others see as her shortcomings. “The idea is, if anyone's going to break through the glass ceiling simply because she doesn't acknowledge that the ceiling is there, it's Boo," Sherman-Palladino says. (Boo's character is loosely based on Sherman-Palladino, who studied ballet intensively as a teen—and owned a Snoopy leo like the one Boo wears in one episode.)

It also doesn't hurt that Boo is the best ballet dancer on the show, which, given Jenkins' pedigree, is no surprise. Jenkins' mother, Kathleen, danced professionally with Pacific Northwest Ballet and Los Angeles Ballet before transitioning into teaching. “Most kids' moms would see them in ballet class and say, 'Oh, honey, you're wonderful!' " Kaitlyn says. “My mom was supportive, but with her it was like, 'Honey, that was nice, but you should turn out your leg in plié a little more.' "

Kaitlyn began training at her mother's studio in Los Angeles County, CA, and eventually switched to a more intensive ballet program at Anaheim Ballet. “I loved ballet for the pointe shoes and the tutus, like all little girls, but for me the best part of it was telling stories onstage," Kaitlyn says. “I'd be dancing Clara, and I'd start talking in my head: 'Drosselmeyer, I really want the nutcracker!' The acting and storytelling were important to me." 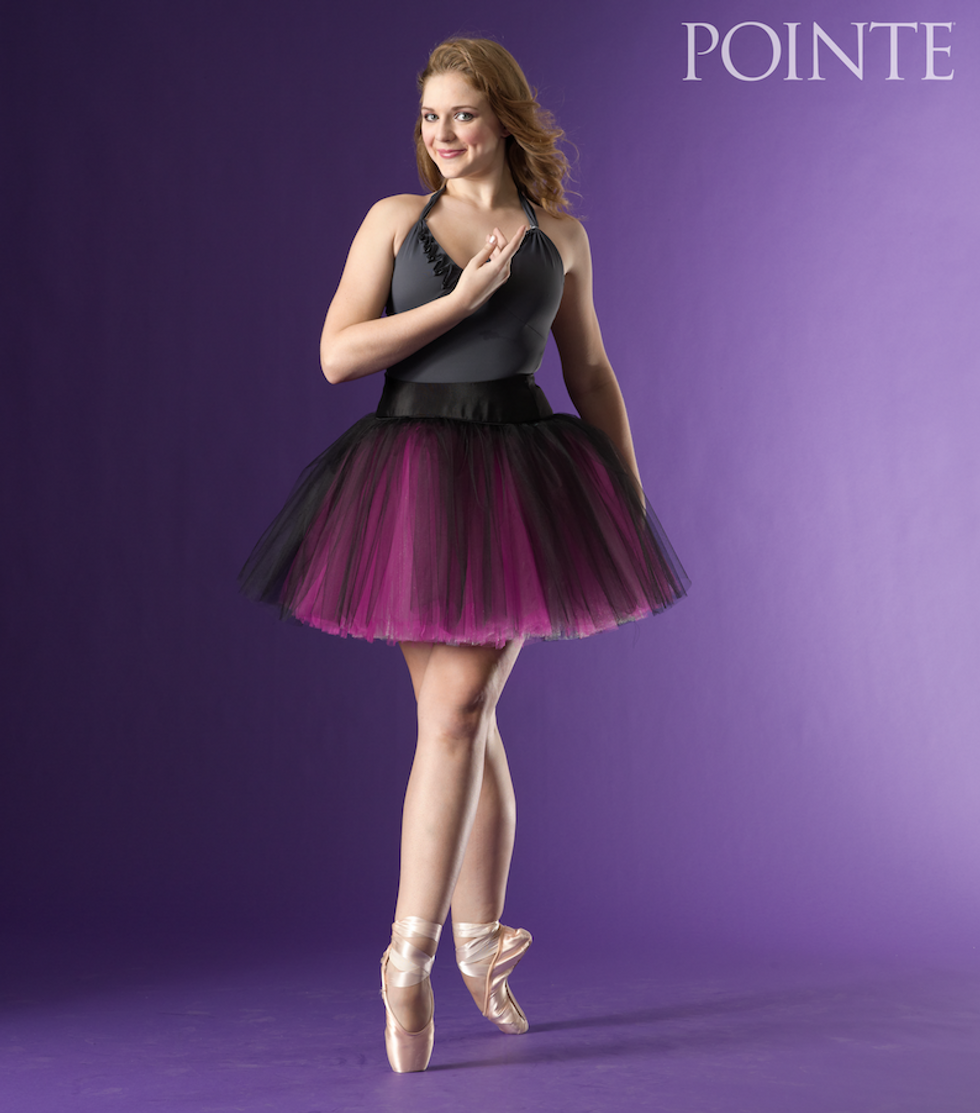 Photo by Nathan Sayers for Pointe.

As a teenager, she attended American Ballet Theatre's New York summer intensive twice, where she proved she could swim with the big fish. During her second summer, she was placed in the same level as Michaela DePrince, now in Dance Theatre of Harlem, and Cassandra Trenary, now a member of ABT. She was also able to catch glimpses of her idols, Diana Vishneva and Gillian Murphy. "I was definitely the one who went backstage to gawk at them," she says. "When I saw Gillian for the first time I almost started crying, like a little weirdo."

Kathleen was thrilled that Kaitlyn was passionate about ballet, but hesitant to push her in that direction. "I spent my whole career trying to lose those last 10 pounds," Kathleen says. "I saw how tough it can be. Kaitlyn is just structured thicker in her hips and legs and ankles, and I knew that would make things hard for her. But she has a lot of other wonderful attributes—great feet, good extension, a flexible back. And she wanted it so badly."

"My mom and I talked a lot about how to eat healthily and cross-train to get my muscles longer and leaner," Kaitlyn says. "She'd say: 'If you want to do this, realistically, you're going to have to be at your thinnest.' " Kaitlyn tried to be sensible about dieting, but there were dark moments. "I had days when I'd just look at myself in the mirror and say, 'You're ugly.' I went through phases where I wouldn't eat. Sometimes I still struggle with that. All that negativity—it can gnaw away at your love of dance."

In addition to training at Anaheim Ballet, as a high school freshman Kaitlyn enrolled at the Orange County School of the Arts' Music & Theater Conservatory. At 15, she started working with well-regarded acting coach John Kirby, and by 16, she'd landed her first professional acting gig: a commercial for the Nintendo Wii. "When I auditioned, the director asked if I was a dancer," she says. "He liked the way I carried my upper body. In a way, ballet got me my first acting job."

While more small acting opportunities began to come Kaitlyn's way, she was still set on dancing professionally. But by the summer after high school, the ballet studio was becoming an increasingly frustrating place. "I was at Boston Ballet's summer program, and the plan was to audition for their year-round school at the end," she says. "Then I injured my ankle, and flubbed the school audition." She returned to California feeling dejected—and lost. "All of my friends were off at these great colleges," she says. "But I had no idea what I was doing."

As soon as her ankle healed, she broke a toe. Then she was in a bad car accident. "At that point, I said, 'I think God is telling me what to do.' " She decided to leave ballet and focus on her budding acting career.

Within months, "Bunheads" seemed to drop out of the sky. "My mom saw a post about an open call," Kaitlyn says. "She was like: 'Kaitlyn! This Boo girl is exactly like you!' " At the dance portion of the audition, Kaitlyn pulled out her pointe shoes and performed Kitri's first act variation for the casting directors—on carpeting, in a narrow room crammed with desks. "I thought it was a disaster," she says.

It wasn't. "When we finally saw Kaitlyn, it was like, hallelujah!" Sherman-Palladino says. "We had an incredibly hard time finding a girl with a different body type who was also a rockstar on pointe. Because the cold, sad fact is, if you don't have the right physical look, usually you quit before you're Kaitlyn's age. You move on to something else. So when Kaitlyn came in, we said, OK, we're done. Cocktails at 5, we got her."

There's more to the Kaitlyn/Boo parallel than body type and talent. Like Boo, Kaitlyn is also an eternal optimist. "Her inner 13-year-old—that's what makes Kaitlyn sparkle," says "Bunheads" choreographer Marguerite Derricks. "A lot of dancers get to a point where they forget how much they love dance. Kaitlyn is still excited about it. Every time I show her something, it's like I just showed her the best thing ever."

"She's not just Boo-like, she is Boo," Sherman-Palladino says. "There are a lot of puppies and unicorns and sunshine in Kaitlyn's outlook. In fact she's so exactly the way I always saw Boo in my head that they've meshed into this weird amalgam of a character. I call her Boobear on set now."

"Bunheads" has reawakened something in Kaitlyn. She was initially anxious about reentering the ballet world, even Hollywood's version of the ballet world. "I didn't want to slip back into those negative mentalities," she says. But the show's zany dance numbers let her forget about her anxieties. " 'Bunheads' helped me remember that I dance because ballet is fun."

She's also glad to be a role model for young dancers struggling with weight and body issues. "So many girls suffer so much," she says. "People write to me all the time on Twitter and Facebook, saying they're just like Boo. It means a lot to me to be in a position to help them."

From the start, Kathleen assured Kaitlyn that if she wanted to dance, she would find somewhere to do it. "I taught her: If you love it, there is a place for you," Kathleen says. Neither imagined that place could be network television. But Kathleen's mantra has become Kaitlyn's motto.

"I want to tell everyone who's struggling: Your training is more important than your body type," Kaitlyn says. "Yeah, you might not dance with The Royal Ballet. But the important thing is to be the best dancer you can be. If that's ABT, that's amazing. If it's a regional musical—you know what? I've done that, and it's awesome!"