For a classically trained ballerina, Juliet Doherty hasn't had the most conventional career. The New Mexico native, who was initially trained by her mother at her grandmother's studio, spent three years as Clara in the Radio City Christmas Spectacular before heading to the San Francisco Ballet School, where she eventually became a trainee. But rather than join a company, Doherty has since pursued projects that blend her love of ballet and acting. In 2014 she worked alongside Tiler Peck in the Susan Stroman–directed musical Little Dancer, and later landed the lead role in the indie movie Driven to Dance.

We caught up with Doherty to talk about her experience making the movie, as well as her unique career path.

High Strung Free Dance has been in the works for a long time. How does it feel to finally see its release?

I'm super-thrilled, because we filmed it two years ago and so much has happened since then. I finally saw the film in its entirety last summer, but my family and friends haven't seen it yet, so I'm really excited.

How long did the filming process take?

We rehearsed for three weeks, creating a lot of content for scene transitions—there's dance scattered throughout to aid the storytelling, in all sorts of styles—as well as the 15-minute finale number. Myles Thatcher and Tyce Diorio teamed up on some things, and then choreographed other parts separately. Then we filmed for six weeks—five in Romania and then one week on location in New York City for all the exterior shots. 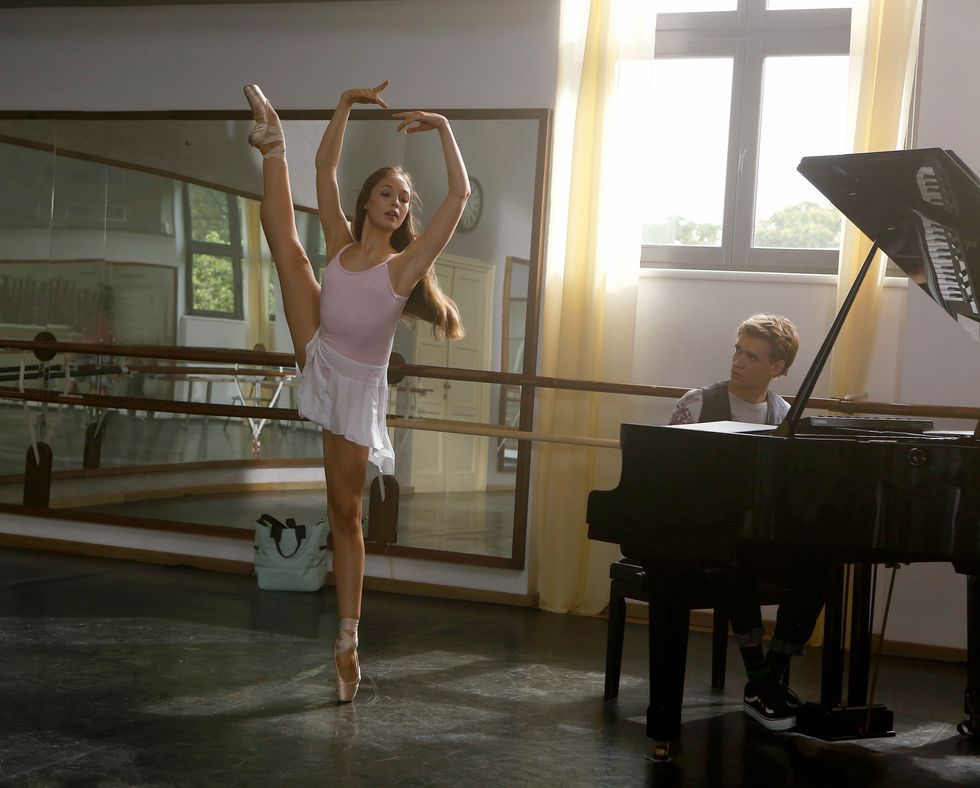 What was it like on set? Was it hard to be in pointe shoes for so many hours?

When you're in a ballet company you have class and then have rehearsals and a performance. So in a way, being on set is similar in that you have to maintain your energy, make sure you're eating enough and checking in with your body. That said, we had three very hard back-to-back days when we were filming the 15-minute finale. Each day only focused on five minutes of choreography, but was 15 to 16 hours long—by the third day we were filming until 4 or 5 am, in pointe shoes! But Michael and Janeen took care of us and made sure we were getting enough breaks. And honestly, being in pointe shoes was never an issue for me on the long days—I found being in heels for long stretches much more difficult.

Your character Barlow is a ballet dancer trying to make it on Broadway. Can you explain what has led her to this point?

Barlow comes from a classical background—so far she's been a student, but she hasn't joined a ballet company. Her mother Oksana, played by Jane Seymour (who was in the first movie, too) is a really strict dance teacher and has all these dreams for her. But Barlow is at a point where she wants something new—she wants to be on Broadway. Getting cast in Free Dance is her first big break. But she's very naïve, and she has to learn quickly how the professional world works and develop a thick skin. 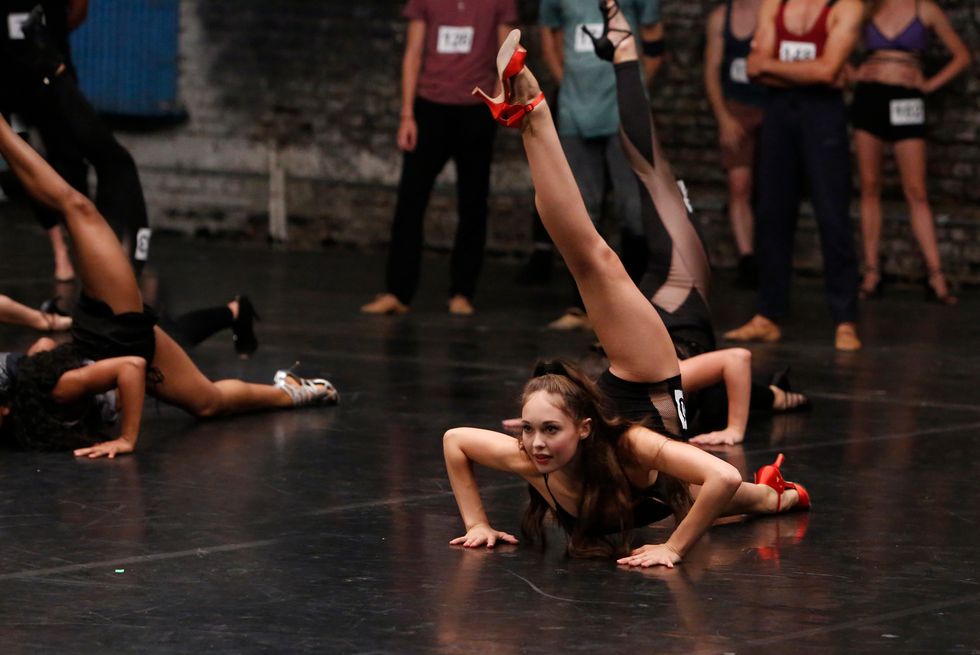 Doherty in the audition scene from High Strung Free Dance

Your own mother was your ballet teacher. Was that helpful in your scenes with Jane Seymour?

My mom taught me until I was 14, but she's never been an overbearing stage mother. My parents have raised me to listen to my intuition. But I could relate—I remember going into rehearsals with my mom when I was younger and opposing everything she said. I tried to tap into that to make those scenes more authentic. And working with Jane was incredible—I learned so much from her.

Could you talk about your own transition from dancing to acting?

I'm a dancer first and foremost and have been since I was 3. But I've also been doing community theater since I was 6. After three years in Radio City, I decided to focus on ballet technique and moved to San Francisco School. But I was so used to being onstage, and I didn't perform there until our year-end presentation. It reminded me how much I missed musical theater. The year I became an SFB trainee I also booked the Susan Stroman musical Little Dancer. That's when I thought, Maybe I don't want to join a company right now. So the next year I left SFB, moved to Arizona, and was presented with the opportunity to film Driven to Dance, which is now on Netflix. Then High Strung came along six months later.

But I'm not really done with the classical world—I'm 22 now and I know it's a short window, so I go to class every day to maintain my technique. But there's something about musical theater and film and television where you can incorporate your voice with movement—I just feel so expressed. 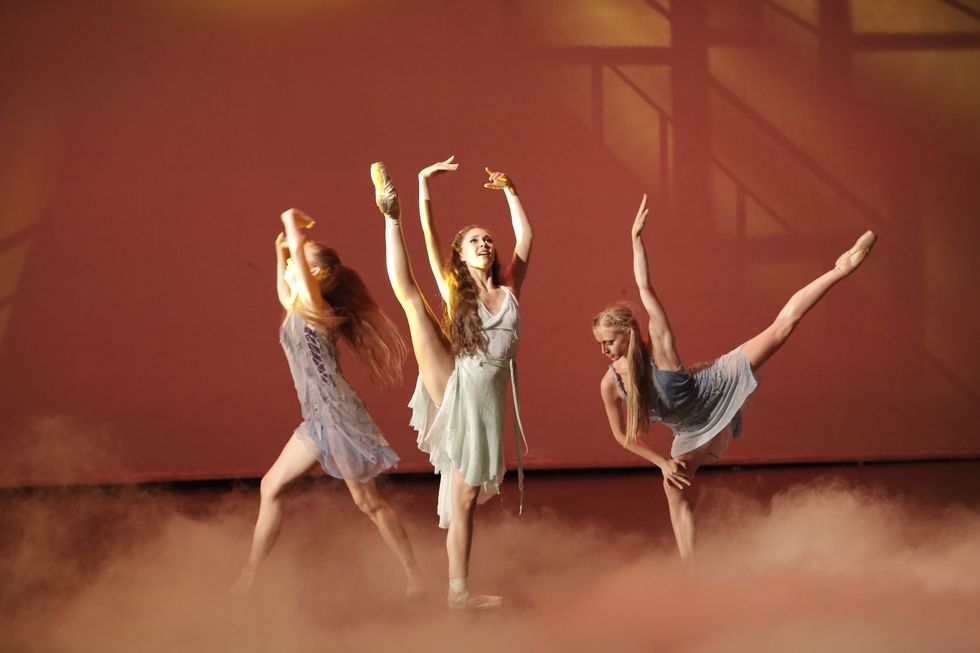 You live in New York City now. How do you train for both your dancing and acting careers?

I take open class at Steps on Broadway—I like Willy Burman, Nancy Bielski, Lisa Lockwood and Karin Averty. I also work in one-on-one singing lessons with a voice coach as much as I can. For acting, I like to take group classes so that I can feed off the other actors, watch people and get ideas.

How much time do you spend going to auditions and castings?

It depends on the season. Right now there aren't a lot of auditions for musical theater, but there will be busy times where I have a casting every day, sometimes two a day. For instance, I might go to a call for Chapstick or a hair product and then run to audition for a new lab for Broadway—it varies. I love the spontaneity of it all! 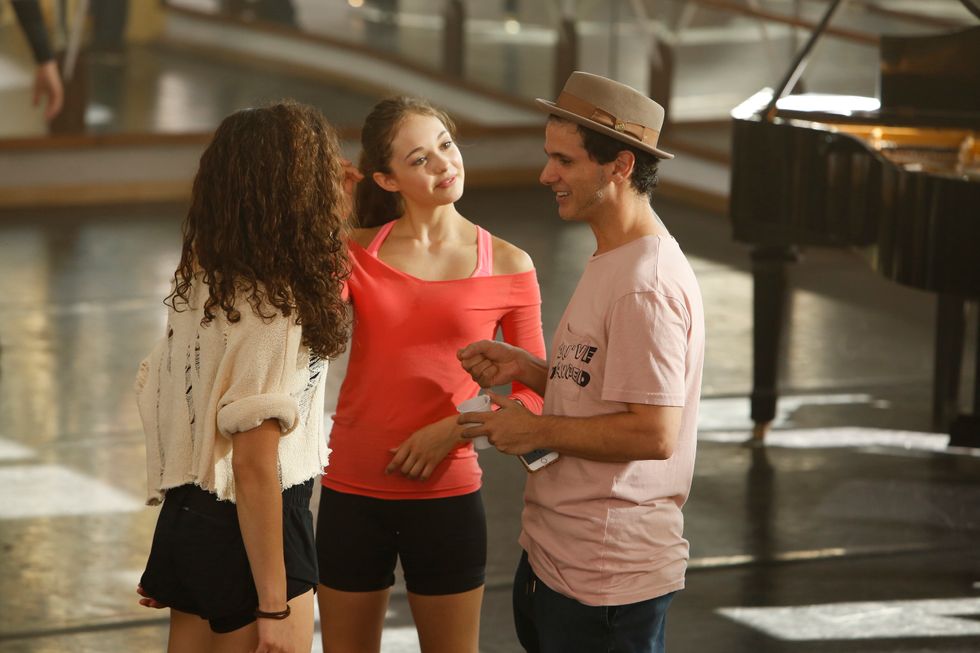 Doherty and Nataly Santiago in rehearsal with Tyce Diorio.

Are you working on any other projects?

I've been wrapping up Steven Spielberg's upcoming West Side Story—I'm a dance double, so you may not ever see my face in the movie. But it's another great opportunity to meld the worlds of acting and dance together!

What is your advice to young ballet dancers who may be thinking about taking a similar career path as you?

What's served me well is never saying "I can't" or "I won't," but "I'll try." It sounds cliché, but I really think that 80 percent of the work is just showing up—see what develops and what you're capable of, because you never know until you try.

This interview has been edited for length and clarity.

juliet doherty high strung free dance ballet dancers who act
If you like us online, you'll love us in print!
Instagram
Pointe Magazine