Imagine this scenario: Hilarion likes Giselle, but she swipes right on Albrecht, and is smitten. Little does she know, Albrecht is already involved with Bathilde. When Giselle finds out, she livestreams her downward spiral (perhaps her hair even comes down in the midst of her heartbreak?), and enters a realm of women who've similarly been ghosted, or otherwise spurned by online relationships.

This is the basic premise of Joshua Beamish's new @giselle. Created for his troupe Joshua Beamish/MOVETHECOMPANY, the ballet will have its world premiere September 5-7 at the Vancouver Playhouse in British Columbia. For @giselle, which stars American Ballet Theatre soloist Catherine Hurlin and National Ballet of Canada principal Harrison James, Beamish has dug deep into the plot of the original ballet, adapting it for the digital age and showing the pitfalls of changing relationship norms.

We touched base with Beamish to hear all about this new project, from his cleverly modern Wilis to his favorite parts of Adolphe Adam's original score.

The Genesis of ​@giselle

In 2016, Royal Ballet director Kevin O'Hare invited Beamish to reimagine a story already in the company's repertoire for a new, 25-minute long ballet. "He was interested to see how I would take classical ballets that exist in another time period and put them in the world we live now," says Beamish, who chose to work with Giselle. "I planted the concept in social media and digital relationships, and felt like it was highly conceivable that Albrecht could create a fake profile as a second person and carry out relationships with two different women online. The mad scene would be a livestream, instead of happening in a public square."

After the premiere at the Royal, Beamish continued to flesh out his idea, challenging the social currency of the ballet to give Giselle more agency as a young woman. "Today, she'd be allowed to flirt back with Albrecht," he says. "There would be a different dynamic in their relationship." He was also interested in the relationship between Giselle and her mother, unpacking the generational divide that exists around online activity today.

Though Beamish had limited resources to start, he'd always imagined that technology would play a crucial role in his full-length version, complete with projections and what he calls digital environments. "The social media components of Act I are happening almost in duet with the dancers," Beamish explains, adding that Hilarion's solo happens while the audience witnesses him seeing Giselle liking photos of Albrecht on social media. "There are always live dancers present, but the dance is an extension about their feelings about how they're behaving online," he says. The Wilis of Act II have been motion captured. "It's a mix of live dancers and digital animated ghost projections," says Beamish. "It means that the corps de ballet can triple in size."

Rather than create fake social media profiles for his characters, Beamish chose to work in the abstract, creating an amalgam of Instagram, google searches, Tinder and more that never reference specific sites. To create the text, Beamish let the internet take the lead. "I read many, many articles about how to talk to a guy and how to talk to a girl. Like, 100 different flirty things to say, then I manipulated them to fit the story," he says. "I tried to layer the effect of the digital overtaking over our existences." 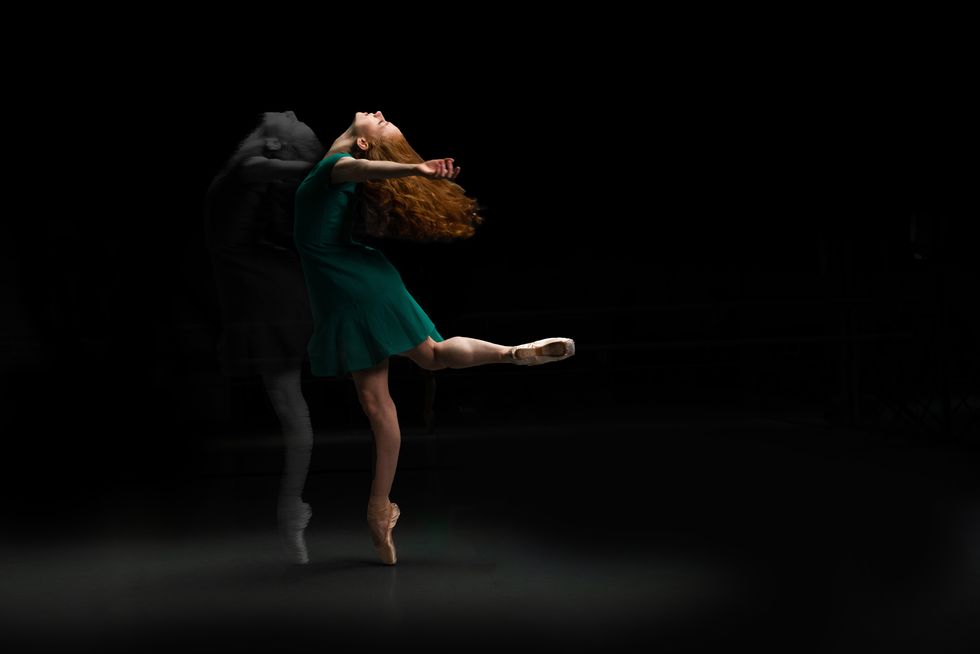 On Finding His Cast

Beamish first started working with Hurlin as a Wili, but when it came time to cast his Giselle, she seemed like an obvious choice. "Her range is so extreme," says Beamish. "She can be incredibly sweet and clear in her technique, and classical, and then she can throw herself all over the floor and be fun and zany. Giselle, and my choreographic vocabulary, really demand that."

Beamish then cast James as Albrecht. "He's the best representation of my work in a male ballet dancer," says Beamish. "We have a really close creative partnership." Pennsylvania Ballet's Sterling Baca as Hilarion rounded out the trio. With his dream team in place, Beamish's main challenge was finding time for rehearsal. "Both Harrison and Sterling have been in situations where they dance Monday through Friday at their companies, get on a plane to New York or Vancouver or wherever Catherine is, and then get back on a plane Sunday night after rehearsals without a break," says Beamish. "It really illustrates their incredible commitment to the project." The full cast totals 14, with additional dancers hailing from ABT, Ballet BC, Ballet Edmonton and Alberta Ballet II.

Deviating From the Original

Though Beamish's version doesn't look much like the original Giselle, he did choose to use the original score. "It's my favorite music in all ballet," he says. "The music is heartbreakingly romantic, and then terrifying minutes later. It's so complex, but it's also really funky, and has so much rhythm to it."

Beamish's movement plays with the music to reference the original choreography. "The original ballet is a ghost within this ballet," he says, adding that he tried to subvert the audience's expectations by showing a glimpse of the step they expect at a certain point before changing course. "I'm having them look for Easter eggs. I feel like I've made it for ballet geeks, because I really geek out on that kind of stuff," he says.

Joshua Beamish on Instagram: “It’s the week of the premiere y’all! Catch this Inside the Studio with @betsymcb of @abtofficial as @ bathilde Choreography by Joshua…”

Beamish took his most liberties with the Wilis. He imagines them as women who've been ghosted, or worse, as a cause of online relationships. Rather than chugging in arabesque, their dancing is sensual. "They have a lot of movement in their hips and shoulders," says Beamish. Their costumes, designed by former New York City Ballet principal Janie Taylor, show them to be individuals. "It was really important to Janie that they all have different outfits within the same fabric texture and tone," says Beamish. "Because of their experiences they've all been drained of color; almost like they've joined a kind of cult."

Solos to Duets... and Vice Versa

One of Beamish's innovations is that Giselle and Albrecht only actually meet once, and then take their relationship online. "Humanity is constantly moving towards trying to turn duets into solos," says Beamish. "Time we used to spend with people, we now spend alone with a device and messages from other people. My concept for Act I is that duets become solos, and then in Act II, we're trying to change solos into duets. Though the men realize that Giselle is gone, they're constantly trying to bring her back to their reality, so their solos have Giselle as a presence."

The Future of @giselle

After its Vancouver run, @giselle will be picked up by another Canadian company (yet to be announced) and toured around the country. As Joshua Beamish/MOVETHECOMPANY is bicoastal between Vancouver and New York, Beamish also hopes that the piece will eventually have its turn in the Big Apple. In the meantime, he sees @giselle as a companion piece to the original. "I hope it encourages people to see the classical production," he says. "I want my ballet to helps us appreciate that when the original was created, the simplicity of the plot made sense, but our world doesn't lend itself to that anymore."