Jolie Rose Lombardo's Journey Back to Ballet After Spinal Surgery

It was mid-January when 15-year-old Jolie Rose Lombardo first noticed the leg pain. A scholarship student at the John Cranko Schule in Stuttgart, Germany, the Florida native felt fine dancing through full days of classes and completing her regular school schedule. It was only at night that what appeared to be sciatic pain would shoot down her right leg when she tried to lie down, making resting difficult. After a few sleepless nights, spent mostly standing up, she went to the doctor for an X-ray, followed by an MRI. 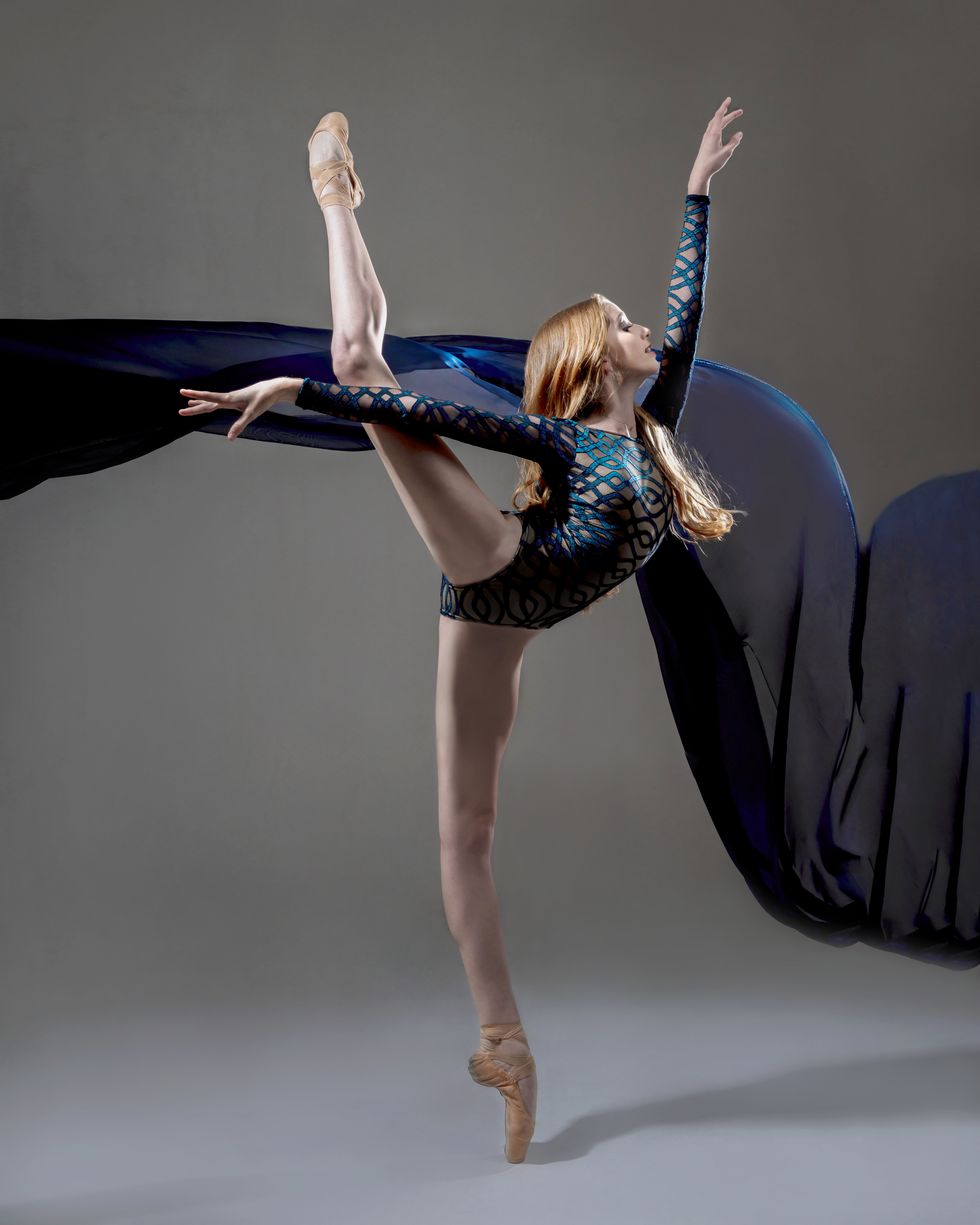 2019 had started out on a high note: Lombardo was coming off a year where she had won gold at ADC | IBC in St. Petersburg, Florida, and she was the Junior Gold medal recipient at Youth America Grand Prix in New York City. Using her YAGP scholarship, she had recently started training full-time at the John Cranko Schule. The day of her MRI, she'd found out that YAGP wanted her to perform a pas de deux at their gala in April. 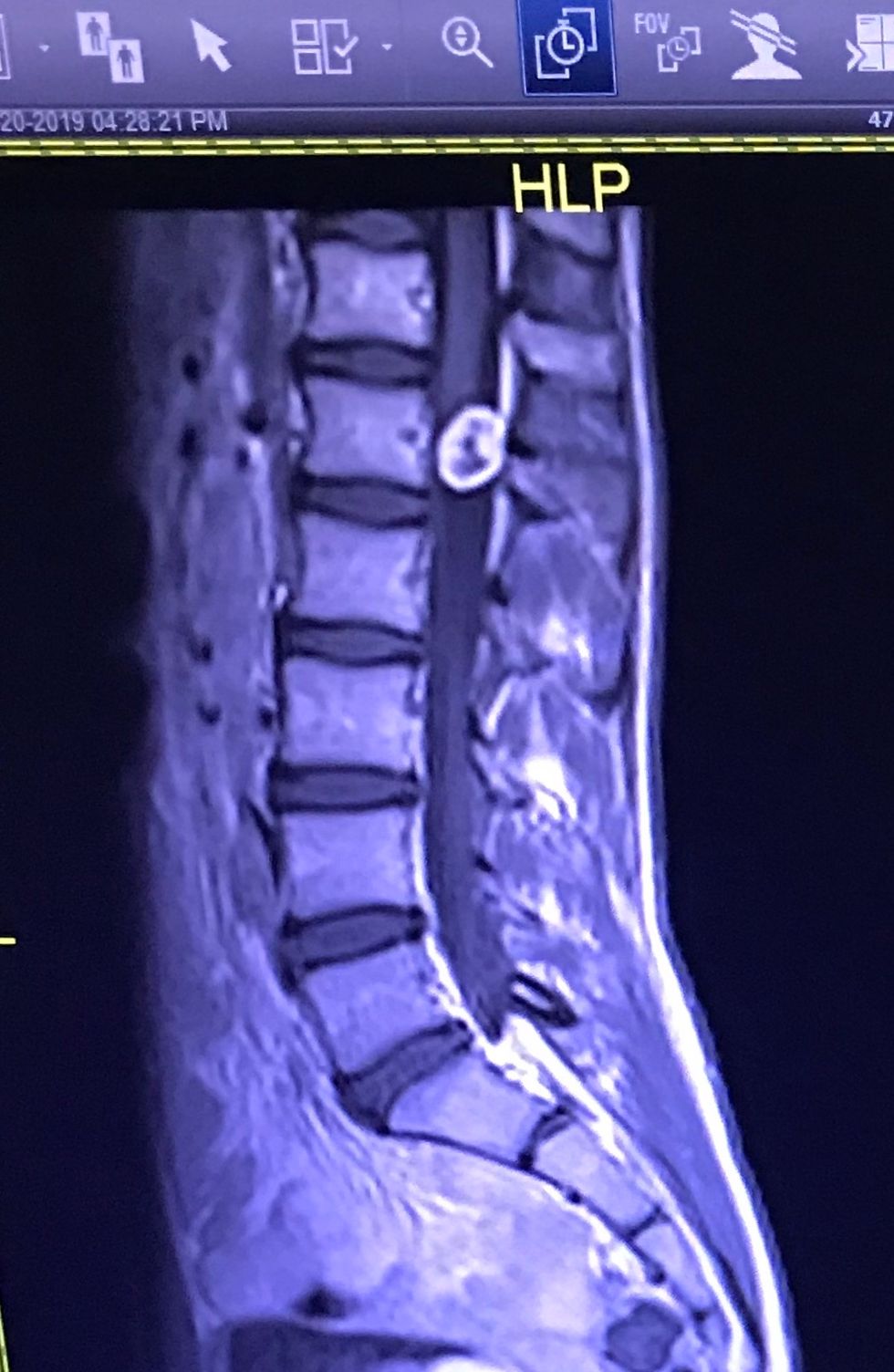 An image of Lombardo's tumor

Meanwhile at the doctor's office, accompanied by a family friend, the news she received was far more serious than expected: Lombardo had a tumor on her spine, and it needed to be removed immediately. "He told me that it was extremely close to the spinal cord," says Lombardo, "so if I didn't have the surgery as soon as possible there was a 100-percent chance of me being paralyzed, permanently." Though the surgery would be risky and invasive, not having it would be much worse.

Thirty hours later, Lombardo was on a flight back to the U.S., while her mom researched surgeons who could perform the operation. Shortly after she landed, she was admitted to Scottish Rite Hospital, a children's hospital in Atlanta, to prepare for surgery.

Jolie Rose Lombardo on Instagram: “Jan.17th 2019 I was diagnosed with a Tumor (benign) on my Spinal Cord. They said 100% you will be Paralyzed or I can attempt to take it out…”

For the first three days after the operation, Lombardo had to lie on her stomach (it wasn't safe to move her spine after it had been put under so much pressure) and was temporarily paralyzed from the neck down. It was then that the full impact of what had happened began to set in. "All I can remember is telling my mom over and over again, 'I never realized how much I loved ballet until I couldn't move,' " she says. "Just the possibility that I would never be able to move again was overwhelming." Though the surgery had gone as planned and the tumor had been removed, she knew how close a call it had been.

During that time, Lombardo's mom set up a computer on her hospital bed so that she could watch ballet videos. "That was all I did while I was laying there, besides thinking that I have to be able to dance again," Lombardo says.

On the fourth day, she was able to move, but she knew full recovery would be a long journey. She was in a wheelchair for a few days, then progressed to using a walker in the hallway outside her hospital room. As a ballet dancer, Lombardo was used to feeling strong, but now her coordination felt off, and she would have muscle spasms. "I didn't realize how much the spinal cord affects your entire body," she says. "Everything was relaxing or giving out at random points. I'd have my phone in my hand and I would drop it, or I would have my arm on a chair and it would fall." 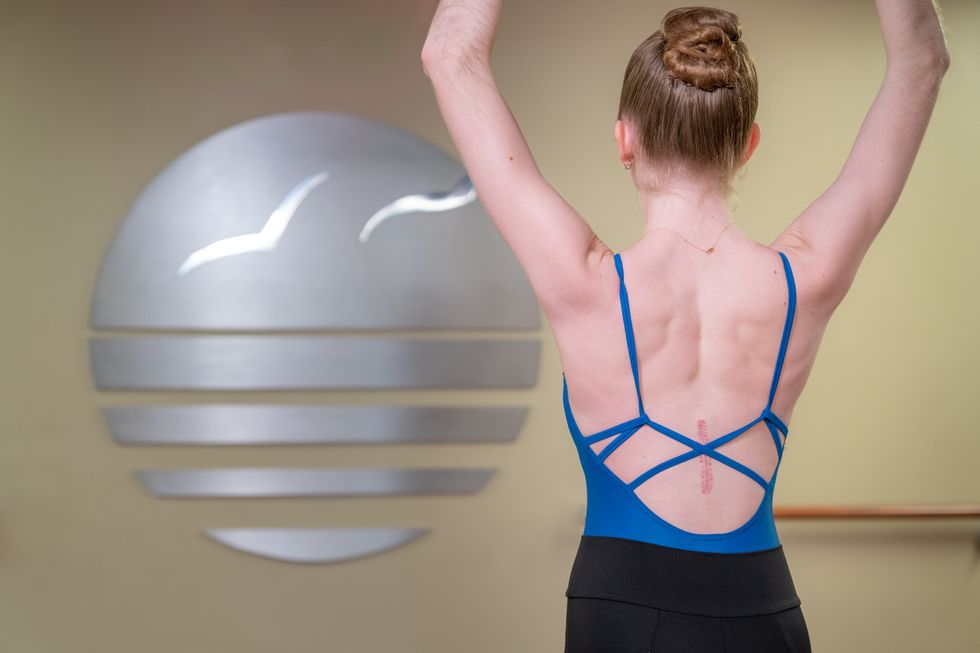 Lombardo, here at Brooks Rehabilitation Hospital, has a surgical scar in her mid-back.

Lombardo knew she would need to go to full-day rehabilitation in order to get back to dance as fast as possible, and she was determined to recover in time to perform at YAGP's April gala. After eight days in the hospital, she moved back home to Jacksonville, Florida, where she started at Brooks Rehabilitation Hospital. Brooks had just started a day treatment program for spinal cord injuries and disorders, and Lombardo became their very first patient. "Once I got to Brooks Rehab, I was there all day, every day," she says. She started with occupational and physical therapy, and gradually progressed to incorporating small dance exercises. After several weeks, she brought some marley from home and practiced a few relevés in her pointe shoes, doing a little bit more each day.

The facility had machines to help measure each muscle and make sure she was strengthening them equally and evenly. "I could look on a screen, and I would move a toe or go on relevé, and it would tell me how much effort I'm putting into my right leg instead of my left leg," she says. "It helped me in the long run to be more in touch with my body and what muscles I'm using. Even today I'm envisioning that machine, trying to get myself more in balance." She also got hooked up to zero-gravity machines, so she could practice jumps without placing impact on her spine. Just like in ballet class, she wrote down her corrections and exercises every day.

Back to the Studio

After five weeks in the rehab program, Lombardo was able to get back to regular dance classes. One of her former teachers from Orlando Ballet School (where she trained before John Cranko) offered to give her private lessons. "My very first class, I was the happiest I have ever been in my entire life, just to be able to stand at a barre and do pliés," Lombardo says. She also attended this year's ADC in Florida to take class, and spent a couple weeks training with associate professor of dance Qianping Guo at the University of Alabama, where her sister is a student.

Jolie Rose Lombardo on Instagram: “My goal all throughout my recovery was to make the deadline to perform in the @yagp gala with John Cranko Schule. Sadly I slightly…”

In the end, Lombardo didn't perform at YAGP—she decided it wasn't worth rushing and risking her long-term recovery—but she did attend the gala and was invited to take the stage as a presenter in the awards ceremony. Then, three months after first leaving Germany, she flew back to the John Cranko Schule, just in time to prepare for exams.

These days, she's back to her regular schedule in Stuttgart, continuing to do her exercises from rehab and taking extra dance classes to catch up. "I would like to say I'm at 98 percent of where I was before surgery," says Lombardo. She's looking into summer intensives in the U.S., and plans to spend some time visiting family before a new year at John Cranko begins in September. Mostly, she's just happy to be dancing again. "Everyone that has helped me through this process, I feel so close to now, because they have made this whole experience a lot more positive than it could've been," she says. "I'm so grateful."