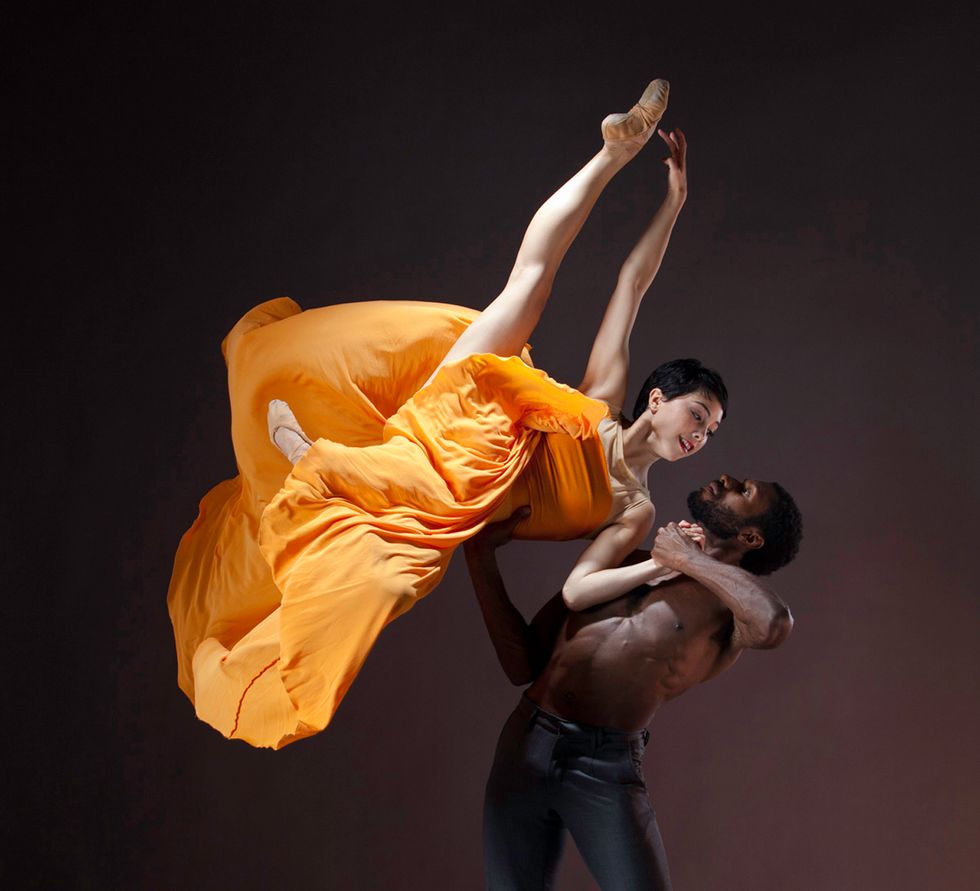 Alina Cojocaru
At 31, The Royal Ballet’s Alina Cojocaru finally got the ultimate gift for a dancer: a full-length ballet created on her. John Neumeier choreographed Hamburg Ballet’s Liliom just for Cojocaru, tailoring the role of Julie, a poor waitress in love with a tough carousel barker, to Cojocaru’s gentle, vulnerable presence and delicate technique. “I had been longing to work with Alina. She is a choreographer’s dancer,” he says. “I couldn’t imagine anyone else as Julie.” Cojocaru carried much of the ballet on her shoulders, lending emotional resonance to her character’s angelic sense of forgiveness. Every step seemed born spontaneously of her stream of consciousness. Liliom was so well-received that a DVD is in the works, and for Cojocaru, it marks another milestone in her career. —Laura Cappelle


Sylvie Guillem
You can take away the pointe shoes, get rid of the bun, forget the tutu: Sylvie Guillem’s ballerina-ness is in her very soul. Guillem brought her repertory program, 6000 Miles Away, to New York this spring, performing two un-balletic pieces by William Forsythe and Mats Ek. But there were enough flashes of those peerless legs and feet to show us that, at 47, Guillem still boasts impeccable technique. And the elegant ease—almost nonchalance—that made her such an astonishing Aurora? It’s still there, and it still captivates. She may be one of the ballet world’s most notorious rebels, but she’ll always be ours. —Margaret Fuhrer


Emily Ellis
It didn’t take long for audiences to notice Washington Ballet’s Emily Ellis. Last season—her first with the company—she brought deadpan kookiness to Twyla Tharp’s Push Comes to Shove, then showed off her purity of line and refined technique in a classically based pas de deux in Septime Webre’s ALICE (in wonderland). But it was her turn as Daisy Buchanan, the pretty object of Jay Gatsby’s desire in Webre’s The Great Gatsby, where Ellis demonstrated her ability to fully commit to a character. Not quite a heroine, Daisy could have come off as empty or heartless, but Ellis imbued her with deep, lovely sentiment. Girlish in early duets with her Gatsby, Jared Nelson, she evolved into a more self-assured and sensual woman, one familiar with the darker corners of the heart. —Lisa Traiger


Herman Cornejo, Daniil Simkin, Ivan Vasiliev
Le Corsaire isn’t good for anything, really, except showing off extraordinary men. But when they’re the right men, all the silliness and awkward ethnic stereotyping are worth sitting through. And when they’re Herman Cornejo, Daniil Simkin and Ivan Vasiliev—as they were for one brilliant night this summer at American Ballet Theatre—suddenly the Metropolitan Opera House’s civilized patrons are screaming like teenagers at a rock concert. Between Cornejo’s suave Conrad, Simkin’s gloriously slimy Lankendem and Vasiliev’s outrageous, off-the-rails Slave, there were enough death-defying leaps and endless pirouettes to goad even the most blasé critics to their feet. It was The Man Show, and what an incredible show it was. —Margaret Fuhrer

Remarkably, Walsh stepped into the role at the last minute to replace an injured colleague. But she found the lack of rehearsal strangely helpful—Moultrie didn’t want her to overthink her interpretation. “He told me not to show a representation of repression, but to really expose myself,” says Walsh. The result was thrilling. —Amy Brandt


Grace Shibley
One of the defining characteristics of a dancer with star potential is the ability to maintain focus in the face of daunting setbacks. Grace Shibley, a striking member of Oregon Ballet Theatre, was already considered an up-and-coming ballerina when, in 2010, a serious foot fracture threatened to derail her career. But the injury only sharpened Shibley’s resolve. With unshakeable will and keen intelligence, she used the rehabilitation process to propel her technique to new heights. When Shibley performed Stravinsky Violin Concerto’s Aria II pas de deux this April, a new physical strength matched her natural ability to explore a role’s nuances. Dancing with a hint of mystery, Shibley gave a mesmerizing performance that foreshadowed an even brighter future ahead.
—Gavin Larsen


The Royal Ballet Live
Peeking into The Royal Ballet studios as the company prepares a new season sounds like every balletomane’s fantasy. Thanks to the internet’s magic, a global audience tuned in when The Royal livestreamed an entire day on March 23. It began with company class at 10:30 am, and by the time U.S. ballet fans woke up, the day was well underway. Four camera crews roaming the building gave the broadcast the feel of a random stroll through the halls: Dancers threw themselves into a sword-fighting rehearsal, Christopher Wheeldon coached soon-to-be soloist Beatriz Stix-Brunell, Liam Scarlett worked on a pas de deux, Wayne McGregor lent commentary, Marianela Nuñez ran her Prince of the Pagodas solo with Monica Mason. Before it ended, Royal Ballet Live reached around 200,000 viewers, and #rblive trended on Twitter as fans chatted with their counterparts across the world. For ballet lovers, it was an unprecedented international moment, a sense of belonging to something bigger than they had ever imagined. Visit The Royal’s YouTube channel to see the highlights again. —Hanna Rubin

Justin Peck
New York City Ballet’s 25-year-old corps member Justin Peck is expertly balancing two careers these days: Movie-star handsome, he alternates partnering ballerinas with creating dances of his own. Peck began making work through the New York Choreographic Institute in 2009. His setting of three movements from Sufjan Stevens’ song cycle “Enjoy Your Rabbit” made such inventive, surprising use of School of American Ballet students that it stole the show at NYCI’s 10th anniversary celebration. Peck’s ability to create exciting phrases and intriguing stage patterns earned him the institute’s first year-long residency in 2011.

This year, his In Creases, set to Philip Glass's Four Movements for Two Pianos, was the first NYCB premiere given at the Saratoga Performing Arts Center in over 25 years; MOVES, the company’s touring group, promptly took it to Colorado and Wyoming. In the fall, Year of the Rabbit, Peck’s expansion of his Stevens piece, also entered the repertoire.

Peck even found time to create Distractions for City Ballet principal Daniel Ulbricht’s summer pickup troupe. “Maybe that title was ironic, considering how busy he was,” says Ulbricht, “but the guys loved it. So did the audience.” —Harris Green


Héloïse Bourdon
Paris Opéra Ballet dancers are famous for elongated lines, incredible elegance—and a stage presence that can seem too chic to connect with the audience. It’s a kind of look-don’t-touch allure. Yet during the company’s U.S. tour this summer, one soloist tore down the stereotype of what a French ballerina could be. In Giselle’s peasant pas de deux, Héloïse Bourdon created a real character in a role that’s all too often used as a show-off divertissement. She looked completely at home in the imaginary village onstage, dancing with a youthful charm and a playful affection for her partner. And underneath her ease and warmth were hard-as-nails technical chops: Her jumps were preternaturally sprightly, her turns dynamically precise. She had the beautiful POB épaulement, but her sunny personality made it enchanting. —Jennifer Stahl


Amber Neumann
Part of what makes Amber Neumann so intriguing is that, while she looks like a 1950s-era girl next door, she fearlessly attacks even the most radically modern choreography. In The Joffrey Ballet debut of Wayne McGregor’s Infra last winter, Neumann brought a palpable warmth, expressiveness and humanity that melted her role’s stylized, automaton-like moves and chilly edges. Blissfully free of classical ballet affectations, Neumann gave us a lonely, anguished character without doing any obvious acting; all the emotion was channeled through her body. A veteran of several major ballet competitions, Neumann has plenty of technique, but in this case it was in the service of an inner emotional fire that was lived rather than demonstrated. —Hedy Weiss

2020 Stars of the Corps: 10 Dancers Making Strides In and Out of the Spotlight

The corps de ballet make up the backbone of every company. In our Fall 2020 issue, we highlighted 10 ensemble standouts to keep your eye on. Click on their names to learn more!

Wanyue Qiao as an Odalisque in Konstantin Sergeyev's Le Corsaire

India Bradley practices backstage before a performance of Balanchine's Tschaikovsky Piano Concerto No. 2.

Back in April, it seemed like everyone in the performing arts was either coping with company shutdowns or watching future work evaporate before their eyes. As seasons were canceled or pushed off into the unknown future, choreographer Val Caniparoli took a deep breath and focused on a glimmer of hope: Finnish National Ballet had commissioned him to develop a full-length Jekyll & Hyde, and was determined to move forward with its November world premiere. So, Caniparoli hunkered down in his apartment while honing his vision at all hours to build this psychological thriller into a reality.

When Sir Frederick Ashton premiered Thaïs Pas de Deux, a duet set to the "Méditation" interlude from Jules Massenet's opera Thaïs, the ballet was immediately acclaimed as one of his masterpieces, despite the fact that it is only a few minutes long. In this clip from 2008, Lucia Lacarra and Cyril Pierre, then principals of the Bavarian State Ballet, give a tender, enchanting performance that is six-and-a-half minutes of pure beauty.

2020 Stars of the Corps: 10 Dancers Making Strides In and Out of the Spotlight

Concussions Are More Than a Bump on the Head. Here's What Dancers Need to Know

Thinking About College Ballet Programs? Here's a Comprehensive Guide to the Application Process