"Twenty, thirty years ago, this work was quite unique," says Forsythe (in foreground) of his evolution as a choreographer. "Now it's been absorbed by new generations, and they expect something like this to come their way." Photo by Angela Sterling for Pointe.

William Forsythe isn't a large man, and he's not particularly flashy. But when he sidled into Pacific Northwest Ballet's rehearsal studio on a bright winter afternoon, the dancers all gravitated to him, like sunflowers stretching to the sun.

“Gather, my dears!" he greeted them, with a huge smile on his face.

Forsythe spent two weeks in residence at PNB last March, putting the finishing touches on the three dances in the first American all-Forsythe program, which included In the middle, somewhat elevated, The Vertiginous Thrill of Exactitude and New Suite.

New Suite, a collection of pas de deux from some of Forsythe's earlier works, had only been performed by one company, the Dresden Semperoper Ballett, prior to its PNB debut. 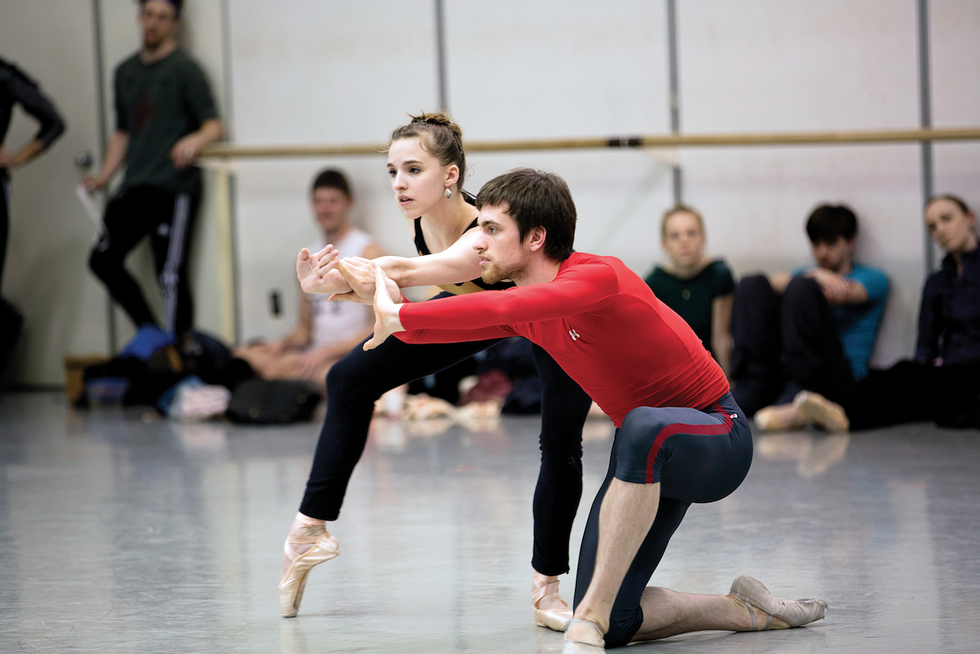 Many corps de ballet members were tapped for featured roles, including Chelsea Adomaitis and Steven Loch.

"They were pieces that were all lost, basically, because the works themselves were retired," Forsythe explained. "From those works, I managed to save these pas de deux, and group them together."

Forsythe discounts any underlying thematic link, but seen as a whole, the nine duets are a rumination on relationships. New Suite begins with a lyrical piece set to Handel, then becomes increasingly abstract, as Handel gives way to 20th-century composer Luciano Berio. For PNB's production, Forsythe reworked and tweaked material, and ultimately removed a section of New Suite, the "Slingerland" pas de deux, from the 1989 ballet Slingerland (Part I). After the first weekend of performances, Forsythe decided the longer duet didn't fit into the flow of the other eight sections.

"Usually I say at the beginning of rehearsal:

'You don't get in this room unless you're an expert.

So let's just start from there.' " —William Forsythe

While rooted in classical ballet technique, the ballet demands precision, speed and expert partnering skills. Forsythe's choreography challenged the PNB dancers, but they seemed energized by the high bar he set for them.

"Dancing Forsythe feels like somebody took the leash off," says artistic director Peter Boal. "You find a freedom in the euphoric physicality that lies within."

Despite moments of intimidation in the studio, many company members felt empowered by Forsythe's coaching style. Every movement was open to revision, based on individual ability and personality. "He brings only joy, positivity and excitement into the studios. There is not an ego to be found," says PNB principal Laura Tisserand. "The whole company has been on a high since we started rehearsals."

All photos by Angela Sterling for Pointe