"I Retired, Now What?" One Dancer's Journey to Find His Post-Performance Career

Some ballet dancers, the lucky ones at least, get to enjoy long, successful careers. Yet their dancing schedule usually allows little time for anything else. At New York City Ballet, for instance, most dancers don't have secondary jobs on the side, although layoffs between seasons provide short opportunities to flex new muscles, like teaching. But performance careers inevitably come to an end, and dancers must then "become" something else.

When former NYCB soloist Antonio Carmena retired from the company in 2017, he realized he wasn't quite prepared for the next step. His retirement uncovered an insecurity buried deep within him—that without dance, he wasn't "good" at anything anymore. It's taken two years for Carmena to develop more work experience as he searches for a new place for himself in the dance world. And while he admits it's an ongoing journey, the pieces are finally starting to come together.

Originally from Madrid, Spain, Carmena joined NYCB at 18 years old in 1998. He did very well for himself, originating roles in ballets by Alexei Ratmansky, Christopher Wheeldon and Peter Martins, and eventually rising to soloist in 2006. He was an audience favorite, known for his whimsical personality, solid technique and buoyant jumps.

Towards the end of his dance career, Carmena started dabbling in teaching, landing a job leading early morning ballet classes at Barnard College. On summer layoffs, he taught at top-notch summer intensives, including the Royal Danish Ballet. But while these gigs continued after he retired, they alone weren't enough to live on. As Carmena began perusing job listings in the dance field, he noticed a perplexing conundrum: after 19 years in one of the country's largest ballet companies, his "experience" was actually quite limited and frustratingly specialized. Although he wanted to stage ballets, teach students, coach professional dancers or direct a ballet school or a company someday, he was only truly experienced as a dancer and had little to put on a business resumé. How does one make the leap, he wondered, from on the stage to behind the scenes? 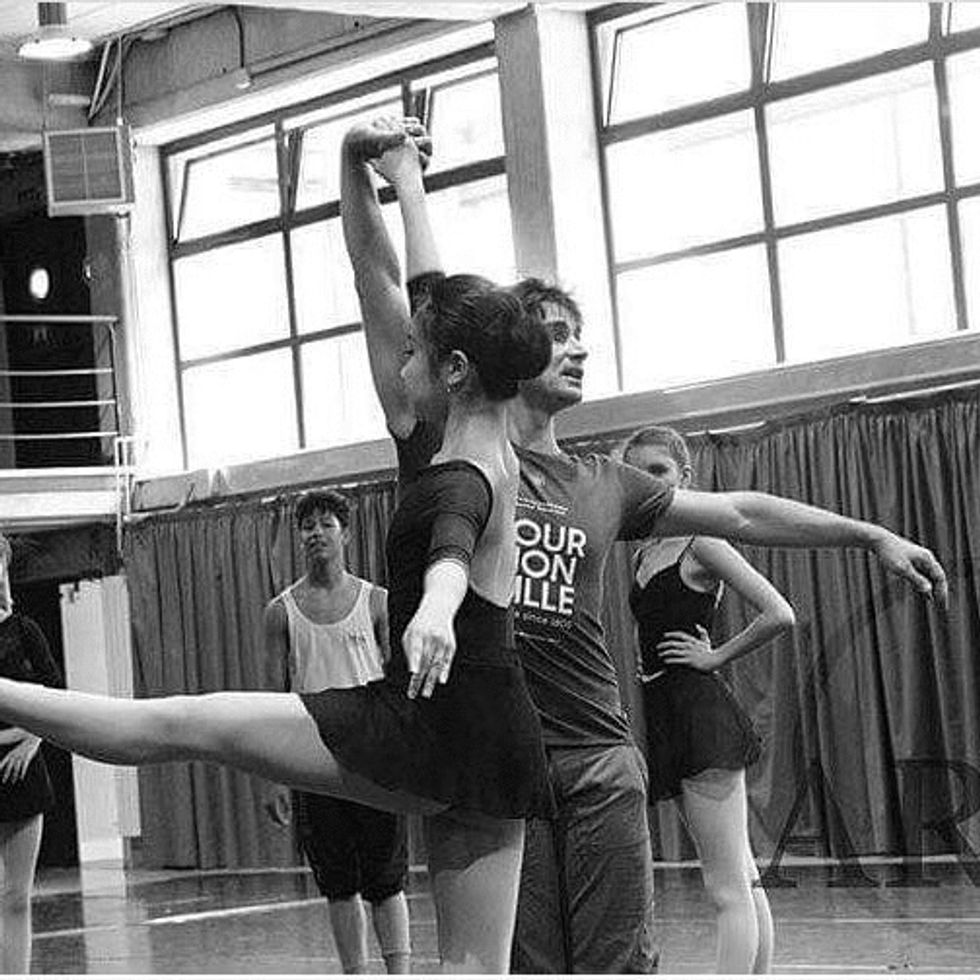 Carmena teaching at the Art Of... summer program last year.

Discouraged, Carmena reached out to Pacific Northwest Ballet artistic director Peter Boal, who had been his teacher when he was a student at the School of American Ballet. Boal reassured him of the commonality of this problem for transitioning dancers and gave him this advice: offer your skills for free and stick those experiences on your resumé. So, over the last two years, Carmena has done just that. He shadowed Boal for a month to learn skills that an artistic director needs, and he watched NYCB ballet master Jean-Pierre Frolich stage and coach various Jerome Robbins ballets. He also offered complimentary master classes and staged an August Bournonville ballet for free on Columbia Repertory Ballet, a dance troupe affiliated with Barnard College. He then stuck his toe in choreographic waters, creating a 10-minute piece with a Spanish flamenco flair for another Barnard group, Columbia Ballet Collective.

On a whim, he sent a video of his ballet to a friend, Chase Johnsey, who was working on the artistic staff of a small dance company in Spain. The two discussed the possibility of Carmena choreographing a ballet for the company, but the collaboration needed to occur at a future date, so he went back to his job search.

Then Johnsey, a former dancer with Les Ballets de Trockadero, called with some news a few weeks later. He was in the midst of starting his own company, Ballet de Barcelona. He had scheduled performances for June 14-16, and he needed a choreographer now. Before he knew it, Carmena had been commissioned to create a 26-minute ballet.

@antoniocarmena on Instagram: “Just a few days until the opening of our ballet, Together. If you are around #barcelona come and see the @balletdebarcelona this Friday,…”

While his 10-minute piece for the CBC dancers served as a starting point for his choreographic skills, Carmena had been given three whole months to create it. This time, he only had three weeks to choreograph a ballet over twice as long. What's more, he knew nothing about the Ballet de Barcelona dancers' styles or capabilities.

Carmena enlisted the aid of his partner and fellow dancer, Marcus Salazar, and the two rented studios to create a bit of the ballet prior to leaving for Spain. After selecting the music—Carmena landed on Symphony in G by the French composer Étienne Méhul—the pair created about three minutes of choreography. But Carmena stopped there. He knew that he didn't want to create a work without its most important component: the actual dancers. Regardless of the stressful time constraints, he wanted a collaborative process, with input from the dancers about how his steps feel on their bodies, particularly the women. (He and Salazar found that choreographing for women in pointe shoes presented a steep challenge. "We can't even try the steps," Carmena says.)

Before leaving for Barcelona, Carmena admitted that he was nervous about leaping so far outside his comfort zone. But he is not putting too much pressure on himself. As he puts it, "I am not trying to be the next Balanchine here!" He is simply on a new journey and is excited for this next stop on the path. Although his transition from NYCB dancer to "something else" has been a process, Carmena feels grateful for it all.