This is Pointe's October/November 2018 Cover Story. You can subscribe to the magazine here, or click here to purchase this issue.

Hannah Bettes has had a very big year. The Boston Ballet second soloist was nominated for a Princess Grace Award, and she made her debut in three major classical roles—Sugar Plum Fairy in The Nutcracker, Effie in La Sylphide and Aurora in The Sleeping Beauty, her most challenging classical role to date. "You're carrying a full-length ballet, and you have to have the stamina and stay composed and in character, even if you're dying!" Bettes says.

When Bettes, 22, made her professional debut with Boston Ballet four years ago, she was already a highly recognized teen in the competition world, bringing with her a raft of prizes. But she also brought stylistic versatility and a palpable hunger to learn. While she possesses the quintessentially elegant classical line—high extensions, dazzling turns and slender feet that curve into perfect crescent moons—Bettes can easily skew off-center to sidle into the slinky undulations or sharp slices of Boston Ballet's contemporary repertoire.

The wide-ranging rep is one of the aspects of the company she likes best. "Having to keep switching your approach keeps things interesting. Technically, I've been able to progress faster."

From Comp Kid to Budding Ballerina

The daughter of a nurse anesthetist and a sales rep, Bettes was a self-described tomboy. While her younger sisters were into ballet, "I thought it was stupid and girlie," she says with a laugh.

But in second grade, her best friend started dance classes and pulled Bettes along. Teachers quickly noticed her natural facility. She took classes not just in ballet but jazz, tap, contemporary and acrobatics, and she was soon asked to join competitive dance teams. "I think all that made me braver, and now I have a more in-depth understanding of how to change my approach to different movement and the importance of adaptability."

The DeLand, Florida, native never took competing too seriously. "But I had people telling me I had potential," she adds, "and my mom said that if I chose to do dance, I should do it 100 percent." When she began leaning toward ballet, she started training at Central Florida Ballet. Then, at 14, she moved to Tampa with her grandmother for intensive training at Next Generation Ballet. There she studied with renowned teachers Ivonne Lemus and Peter Stark, whom she still considers her "dance mom and dad."

Stark, now associate director of Boston Ballet II, immediately saw Bettes' potential. He convinced her that ballet competitions could help make connections and open doors. He also felt they would channel Bettes' drive. "She has a Type A personality, very straightforward, strong," he says. "She needed to be pushed, and she thrived on being uncomfortable and having new opportunities." 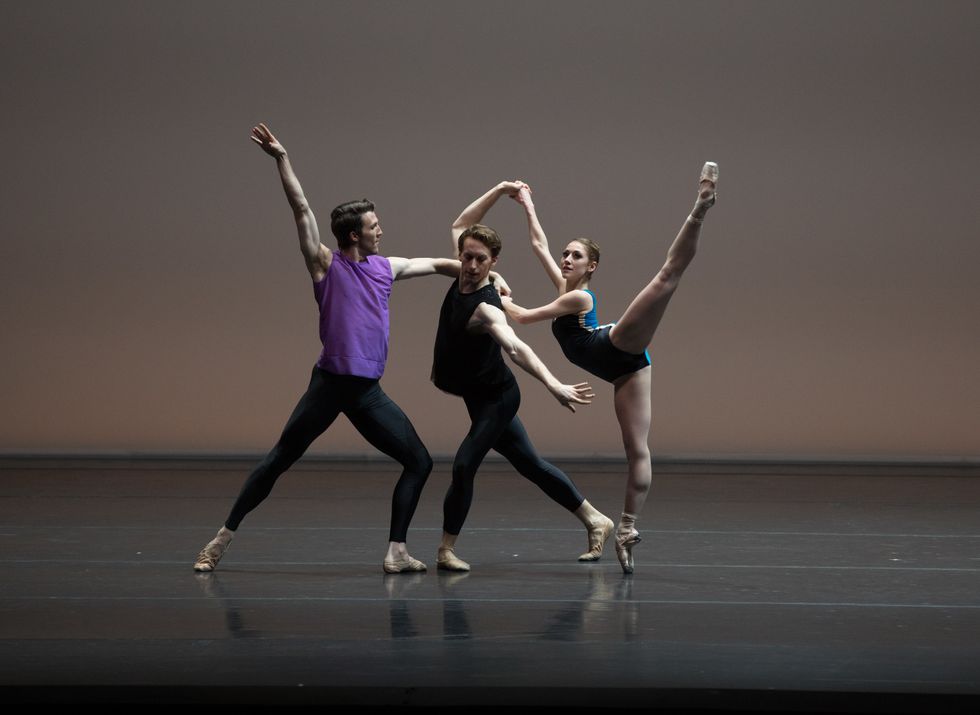 But Stark also says Bettes' "very down-to-earth family" never made a big deal about her talent, encouraging her to pursue competitions for the experience. And so she did, somehow managing to keep it all in perspective. Bettes recalls, "The stakes never felt too high, I never had the nerves, I was very prepared. I think that helped me enjoy it." Perhaps that mind-set also helped her win. Prizes have included gold medals in the junior and senior divisions at Youth America Grand Prix, as well as medals at the World Ballet Competition and the Beijing International Ballet Invitational. In 2012, she won second prize and the Audience Favorite award at the Prix de Lausanne.

As part of her Prix de Lausanne scholarship, Bettes chose to study at London's Royal Ballet School. But after two years, she was ready to head back to the States. "I knew I wouldn't be able to survive the atmosphere in the company, the pressure on the dancers," she says. "It's more competitive, harsher." She also wanted to be closer to family.

Bettes was invited to take a company class at Boston Ballet through Jeffrey Cirio, who was dancing there at the time. Nissinen offered her a corps contract, bypassing the customary entrée via Boston Ballet II (the company does not have apprentice ranks). "I thought she was an exceptional talent," recalls Nissinen. "She has an incredible ballerina body, great feet, high extensions. She's very supple, and a very, very good turner."

For Bettes, the company felt like the right fit: "On my first day here, a dancer gave me a hug and said, 'Welcome to the family.' That really stuck with me. After the experience at The Royal, where the atmosphere was heavier, this felt light, like I could breathe."

Even so, says Stark, "I think the first two years were a struggle to learn the culture and how to be a member of a company." Bettes says that while her time at The Royal Ballet School taught her how to blend in, often a real challenge for competition dancers, she now struggles with how to blend in without losing her individuality, which is prized at Boston Ballet. "I have a hard time meshing the two," she confesses. "I need to be who I am but still function as part of the bigger organism."

Her adaptability has been an asset. During the company's spring programs, Bettes danced the challenging second pas de deux in Balanchine's Chaconne one night, seamlessly blended into a corps of sylphs in La Sylphide the next, then portrayed the dramatic featured role of Effie in the Bournonville classic the following evening.

She has also worked one-on-one with contemporary dancemakers, including resident choreographer Jorma Elo and William Forsythe, who cast Bettes as a lead in his Artifact 2017. "With Bill, it's all about the individual in the bigger picture," she recalls. "As he's creating ideas, you get to be part of the conversation, and you don't experience that too often." She describes the Act II pas de deux in Artifact as one of her all-time favorite roles, but also one of the most challenging. "You're going, going, going, flinging your body into very extreme movement. You really have to trust your partner." 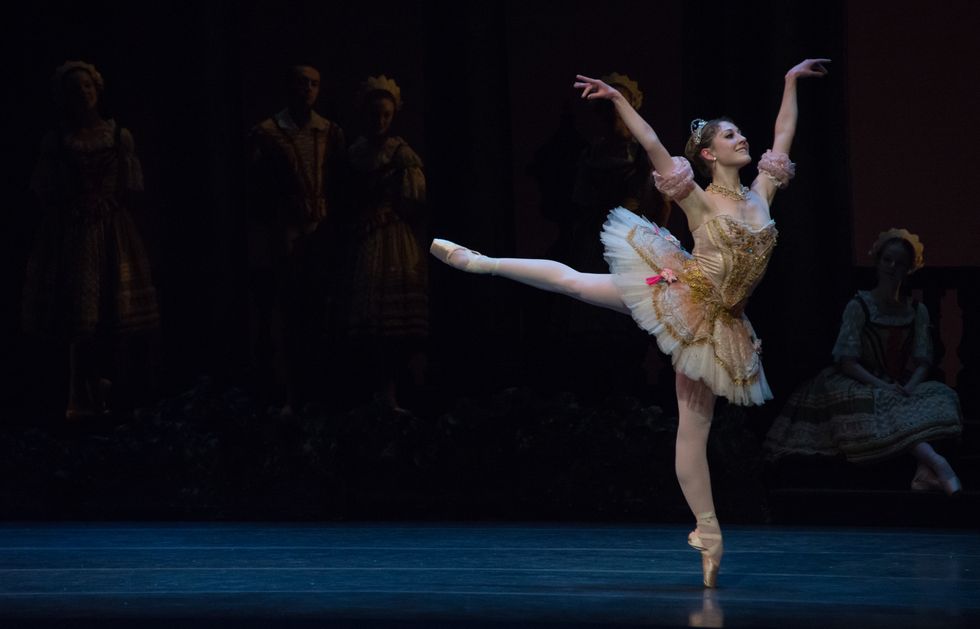 "Hannah is very real and very honest, mature and balanced," says Boston Ballet principal Derek Dunn, with whom Bettes has partnered in several works. "She also has that extra spark you can't teach. She's really comfortable onstage, and she's fearless—she isn't afraid to go to extremes and take risks."

Because of her hypermobility, Bettes works hard to strengthen muscles around the joints to protect against unsafe hyperextension in some of the more extreme repertoire. She's been known to occasionally pop a shoulder out of its socket. "The physical therapists at Boston Ballet have been a lifeline," she says.

Bettes lives with one of her best friends, company artist Sage Humphries, just outside of Boston. "I'm not a big city person," she says. "I like the quiet. And I like commuting to work on the train. It gives me an hour to clear my head." Free time is often spent watching movies, reading, grabbing dinner or clubbing with friends, or visiting the Museum of Fine Arts. She also enjoys traveling—"it's a way to experience lives outside yourself."

She also is working toward a degree in political science, a longtime interest. She began taking online classes through a partnership with Northeastern University that Boston Ballet offers dancers. Life beyond ballet might include work in the foreign service and, she says, "more than anything, I want to be a mom."

But for now, Bettes' career trajectory seems on a solid ascent, and she hopes to some day become a principal. Rather than setting her sights on roles, she's focused on developing artistic depth and integrity. "I want to become an artist who radiates relevance, who is vulnerable and seeks to express real emotions," she wrote in her Princess Grace Award application essay. Nissinen says, "It's a question of her personal progress, a little bit of luck, and staying healthy. She's a young, super-talented dancer with a very promising future. The sky's the limit."

Related Articles Around the Web
boston ballet cover star competition hannah bettes
If you like us online, you'll love us in print!
Instagram
Pointe Magazine