Dancer's Notebook: My Week at the Genée International Ballet Competition

Claire Wu (in pink tutu) with her fellow competitors at the Genée IBC in Hong Kong. Photo courtesy Wu.

My name is Claire Wu, and I'm a Dance major at Butler University. Earlier this month I went to Hong Kong to participate in the 2018 Genée International Ballet Competition, hosted by the Royal Academy of Dance. The Genée is for dancers who have received RAD training and passed their last vocational exam (Advanced Two) with the highest marks of a distinction. I received my RAD training at my home studio, Rachel's Ballet, in Fremont, California, where I was awarded the Solo Seal Award in 2016.

I had also attended the Genée in 2016 when it was held in Sydney, Australia, and I had such a great experience that I wanted to participate again. Unlike most competitions, the Genée has five days of classes and coaching before the semi-finals, which consist of a class onstage, a Dancer's Own solo and a classical variation. The contestants also learn a commissioned variation, which is performed by the finalists. Since the competition was far away, I applied for the Dame Darcy Bussell Genée Bursary, a scholarship to help cover the costs of the competition. I was one of the few competitors awarded one, and it was one of my ultimate deciding factors to go. Below is a journal of my time at the 2018 Genée. 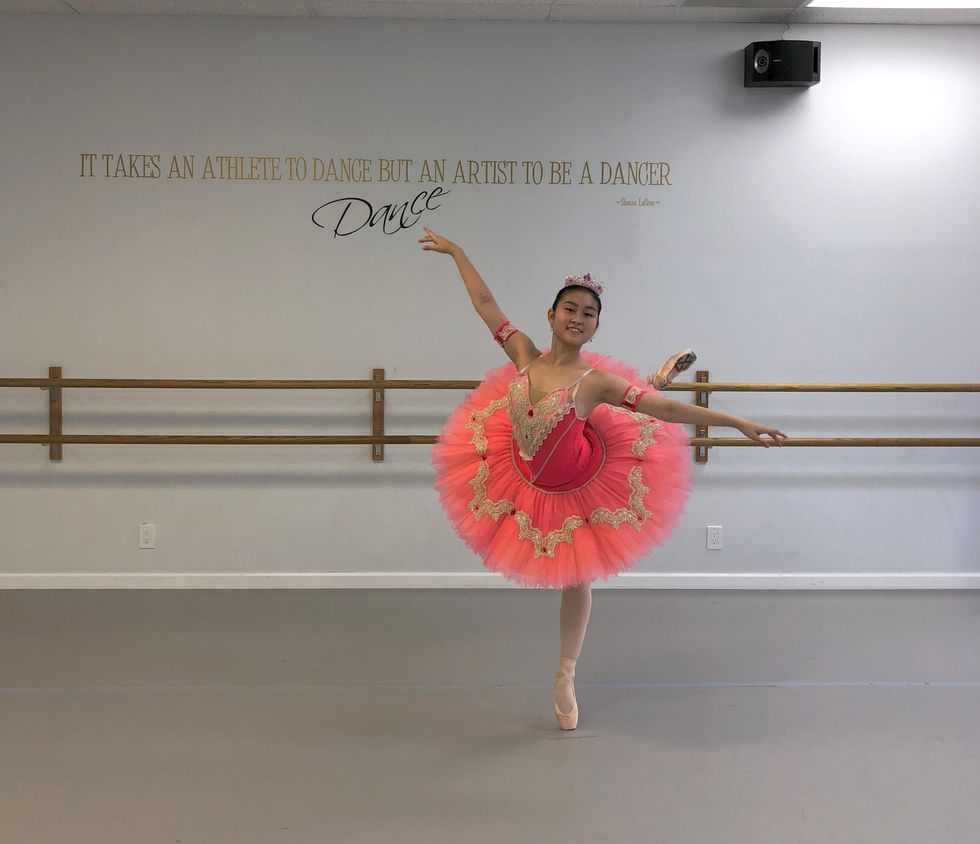 "One last run-through at my studio before heading off for Hong Kong." Photo courtesy Wu.

Training for the Genée was a bit difficult because I was away at college. I did not have much experience with choreography, so I thought that choreographing my Dancer's Own solo was the perfect opportunity to gain more. I started by searching for music. I found a tango by Astor Piazzolla, "Libertango," that could show a bolder, sassier side of my dancing. During winter break, my teacher from my home studio, Leigh Ann Koelsch LRAD, and I rehearsed the Raymonda Act I Variation for my classical repertoire and a rough draft of my Dancer's Own. When I returned to school, I would work on the two variations when I had spare time and self-correct by taking video of rehearsals. I did not start continuous rehearsals with Leigh Ann until I returned home from Butler in May and June. 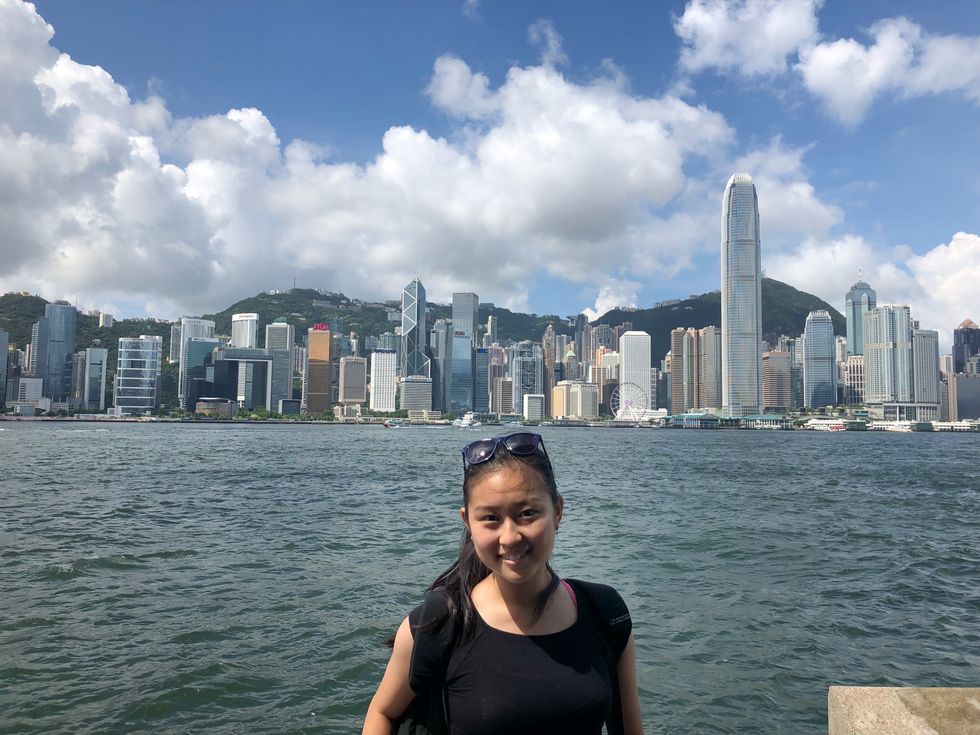 "A little bit of sight-seeing after getting on the plane." Photo courtesy Wu.

After a long flight from San Francisco, I arrived in Hong Kong on August 2. I was a little tired, but ready to explore the city. Since I'd never been to Hong Kong, we went to tourist hotspots like the Stanley Market, the Hong Kong Observatory Wheel and the Star Ferry for easy sightseeing. Hong Kong was a big contrast from the California suburban life I was used to! It was very hot and humid, and the streets were filled with people and all different kinds of stores. 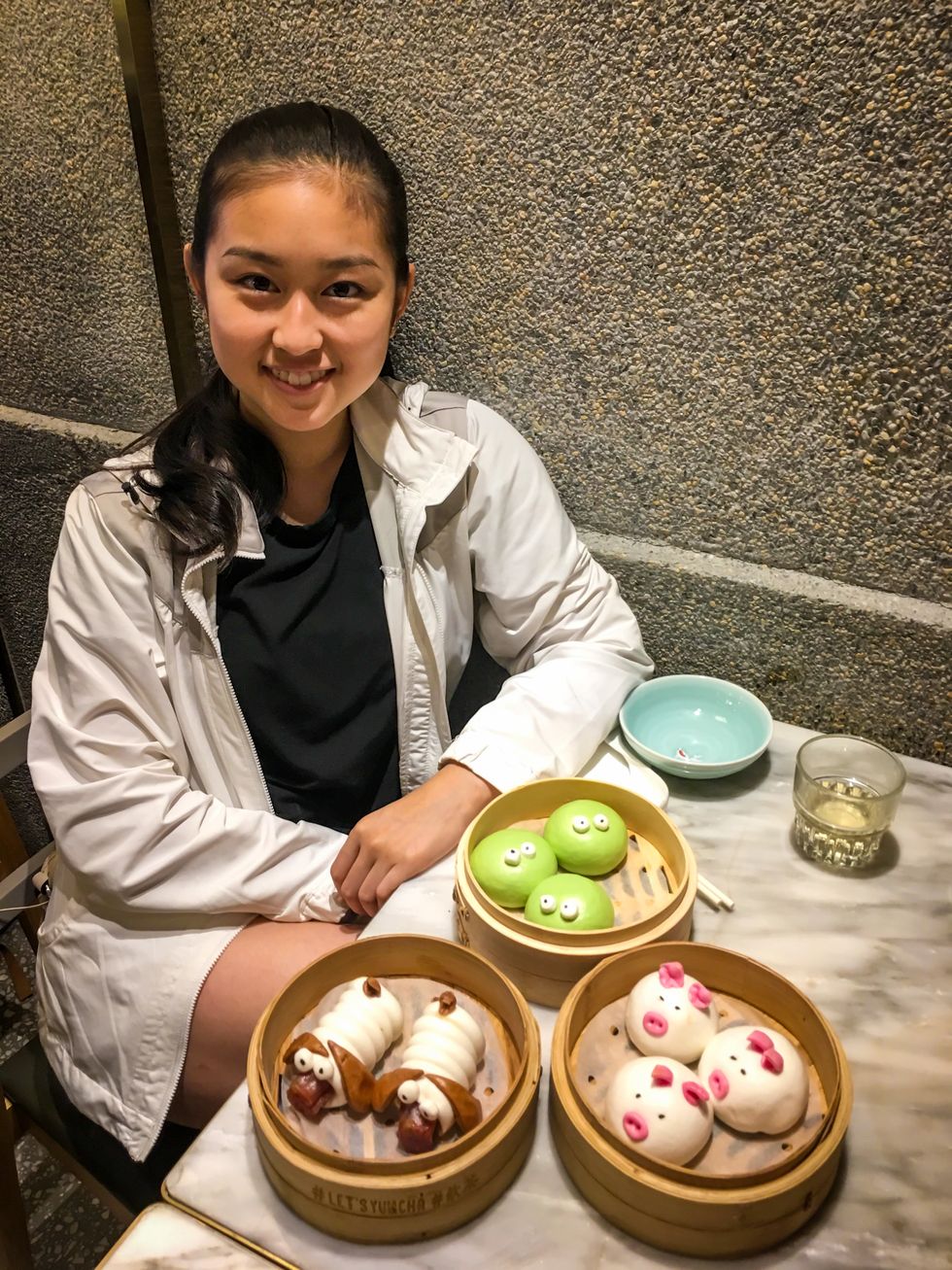 The next day, the competition officially started with registration. I moved into the hotel room, met my roommate Enoka, got my schedule for the week, and met the other candidates and faculty. I was a little nervous at first because I did not know anyone, but I was quickly put at ease, as everyone seemed friendly. 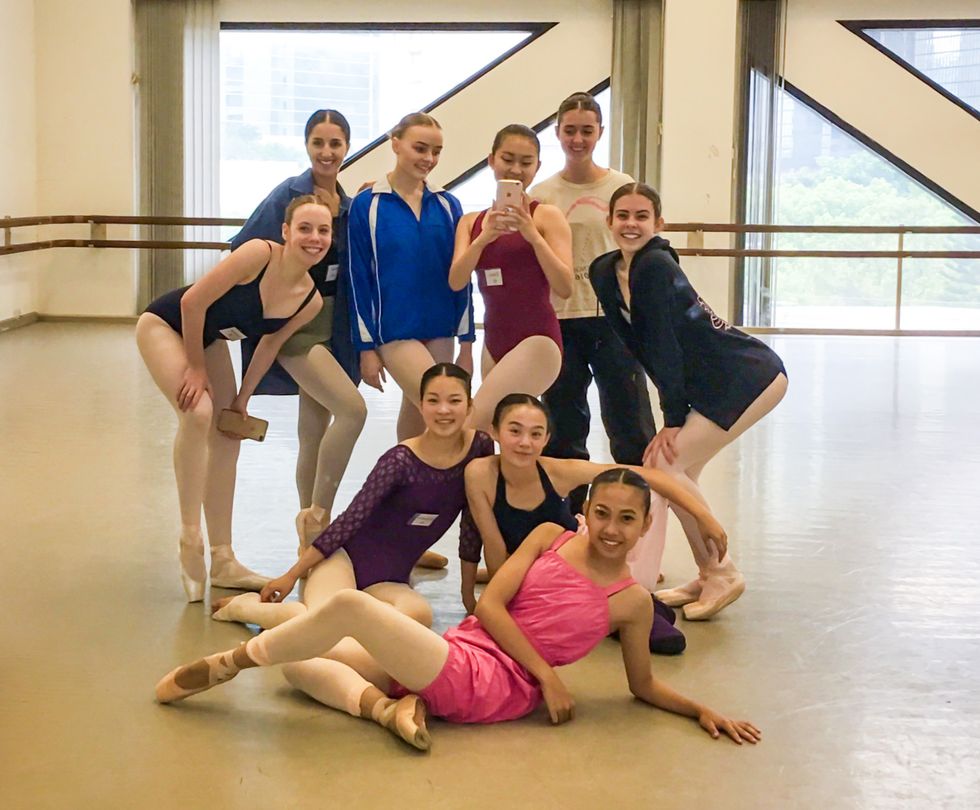 "Some of the competitors in my group and I before rehearsal." Photo courtesy Wu.

The competition started with five days of classes and rehearsals. We were divided up into four smaller groups for the coaching sessions, which gave us more time for corrections and kept us from waiting too long between dances. We'd run our variations one-by-one and receive notes afterwards. Since most of us had been rehearsing our variations for a while, the teachers focused less on technique and more on spacing and being in character. Our classical coaching sessions were led by former Royal Ballet dancer Petal Miller Ashmole, who teaches and coaches worldwide. She worked with me mostly on using the stage evenly and on my port de bras. Hilary Clark, the Genée's producer, coached my Dancer's Own solo. She advised me to make my entrance and exit a continuation of the piece, to be aware of my spacing and to make sure my lines were flattering to the audience. 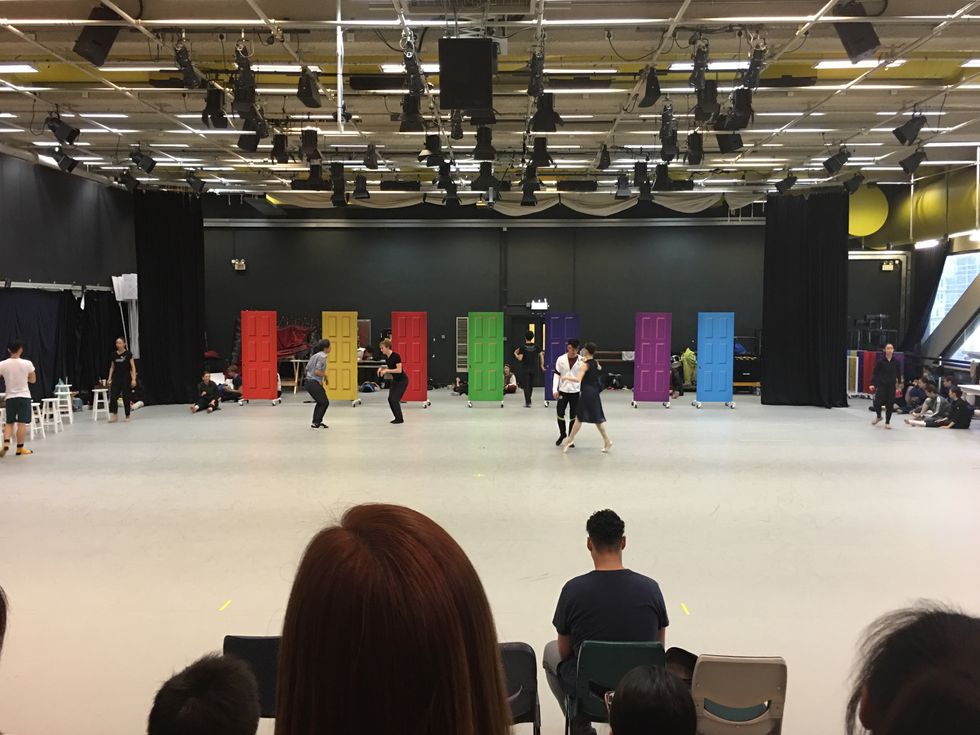 We were also lucky enough to watch Hong Kong Ballet rehearse Septime Webre's ALICE (in wonderland) after classes. It was very inspiring to see a professional ballet company in action, which included a past Genée silver medalist, principal Ye Fei Fei. 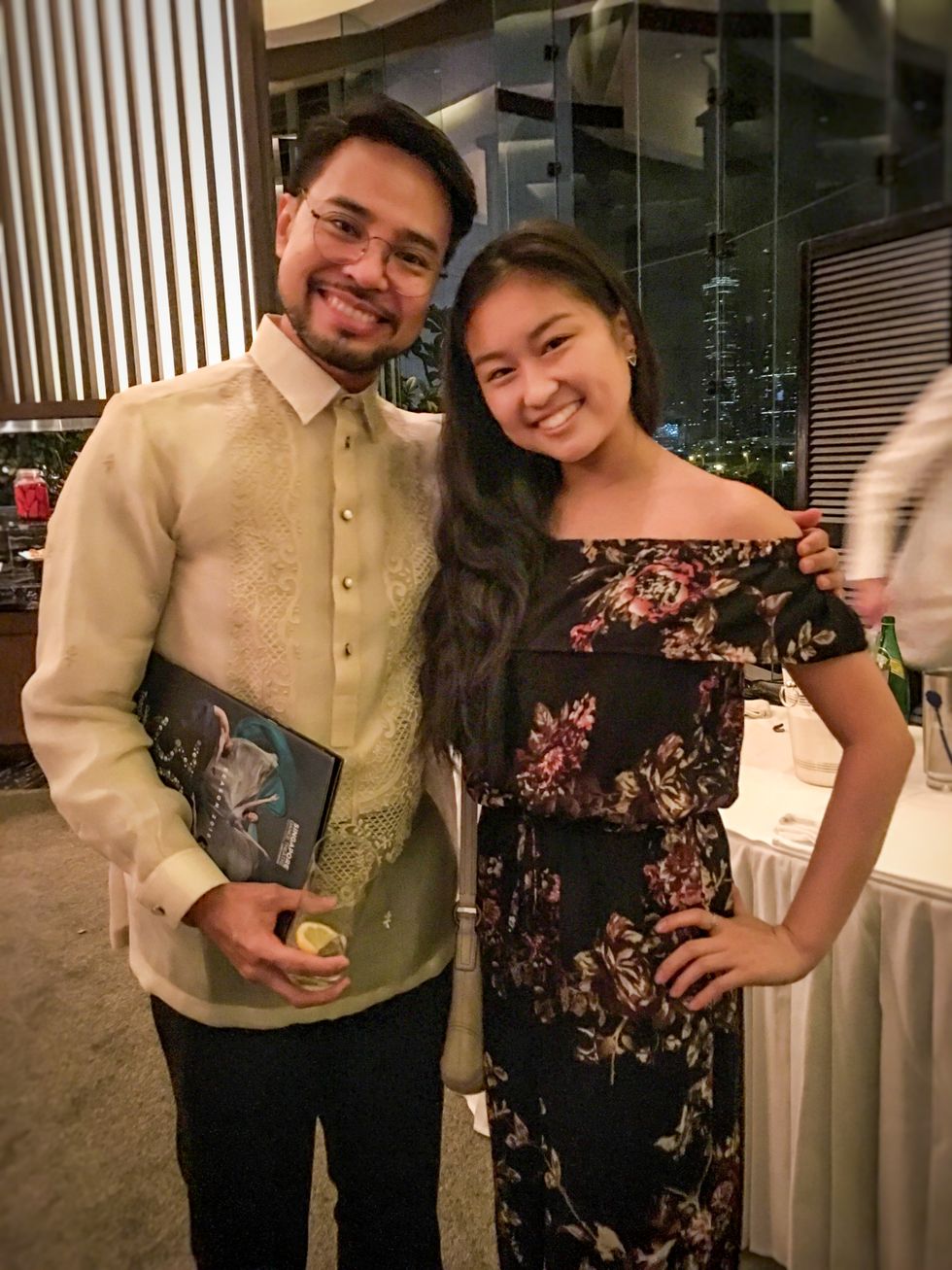 We also had to learn a new piece during the coaching sessions. Carlo Pacis, a former Hong Kong Ballet dancer and award-winning choreographer, created the piece, Leila, for the female candidates. The challenge was making the variation performance ready in less than a week! But this experience gave me a taste of the professional dance world. On the first day, we learned the whole variation. In the subsequent days, Carlo worked meticulously on details, such as arm placements and spacing, editing the piece as he went along. He had great energy and was very specific, but still encouraged us to have our own interpretations.

The main thing I took away from working with Carlo is to be attentive. During his coaching sessions, we were given so much information, and being both physically and mentally present helped a great deal. Watching the other dancers and listening to their corrections was also very helpful. It allowed me to see how people interpreted the dance differently, and gave me ideas of how I wanted to perform the piece. 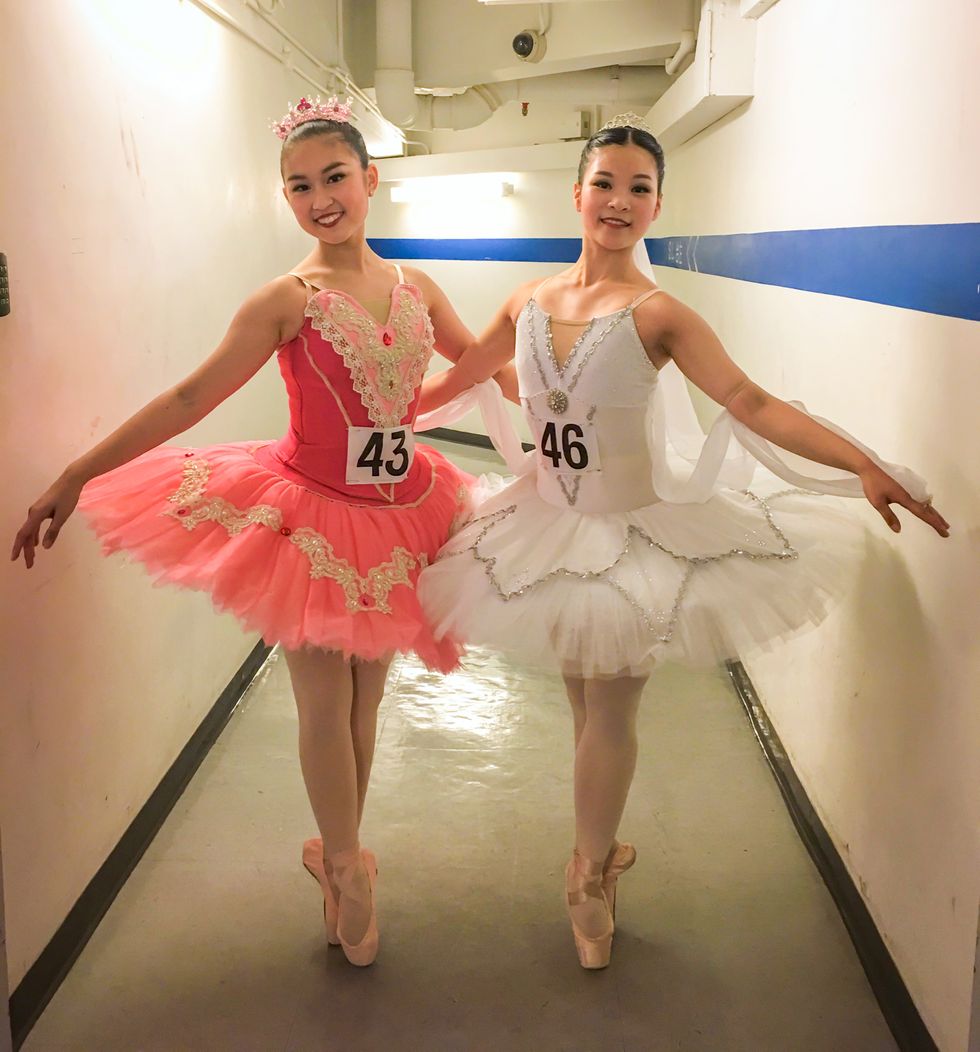 During the semi-finals, I felt a little anxious, but mostly excited and ready to perform the class and my variations. Since I have competed before, I knew what to do to handle my nerves: I calmed myself down by taking deep breaths and telling myself that the solos have continued to improve and that I just needed be the character and perform. I kept my mind busy by going through the choreography and reviewing corrections I received throughout the week. Onstage, I focused more on the artistry and performance quality, letting the technique fall into place. 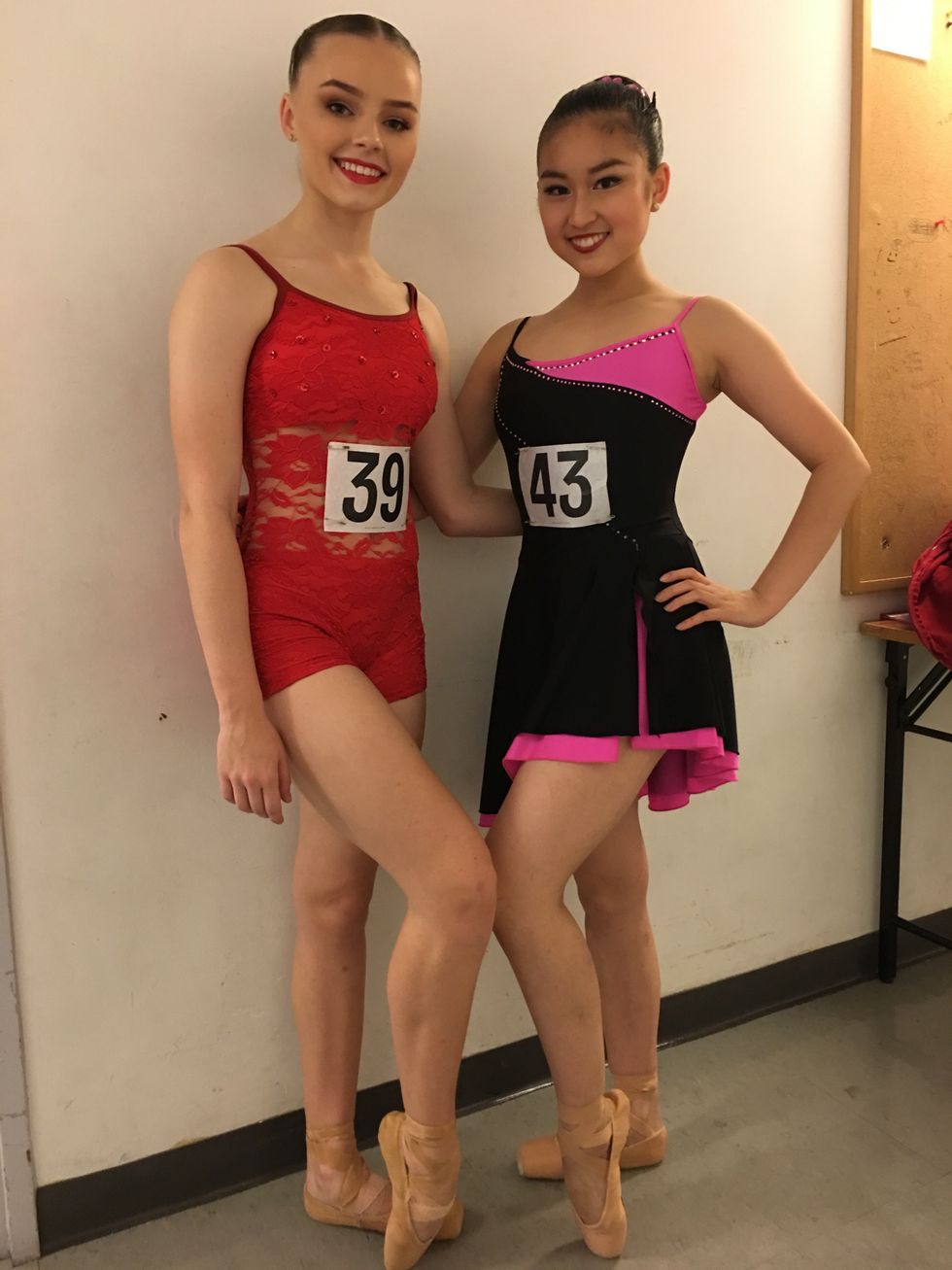 Wu (right) in costume for her Dancer's Own variation. Photo Courtesy Wu.

I was happy with my performances. I felt that I was on my leg and performed to my best of my abilities. It was a little nerve-racking performing my own choreography, but I was happy with how it turned out. I even got a few compliments about it afterwards! Although I did not make it to the final, I gained a lot from the experience and loved watching the finalists perform their variations and the commissioned piece. 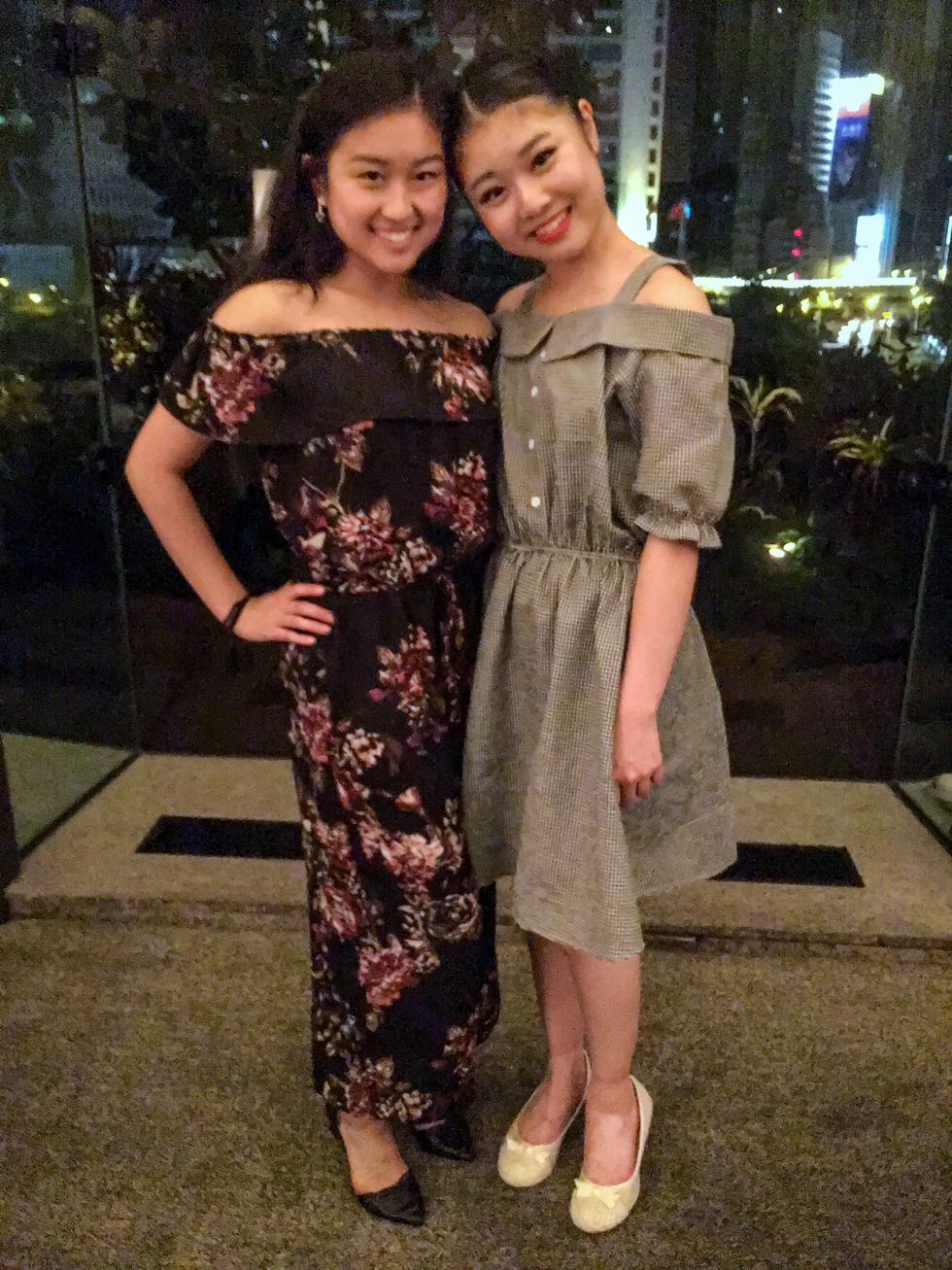 "I was so happy for her and all she had accomplished." Wu with her roommate, bronze-medalist Enoka Sato. Photo courtesy Wu.

I had a wonderful time at the 2018 Genée. Since I had attended before, I felt that I was able to enjoy the whole experience more because I was older and knew what to expect. At the closing reception, I congratulated the finalists which included my roommate, Enoka Sato, who received the bronze medal! I was so happy for her and all she had accomplished. I made friends from all over the world that I would never have gotten to meet if this was not an international competition. I learned about their countries and their different approaches towards dance training. Watching my peers through both the rehearsal process and performances has inspired and motivated me to continue to improve.