Ballerina Maria Kousouni is used to an attentive audience. But when she stepped onstage in Paris this past July, her audience—not to mention the venue and the costumes—were a little unusual. After all, opening a couture fashion show for designer Celia Kritharioti during Paris Fashion Week—with British Vogue's editor in chief in the crowd—isn't exactly a typical gig. "I never imagined that I would be opening a haute couture fashion show in Paris," says KousounI, a principal dancer with the Greek National Opera Ballet. "To enter this world of fashion and beauty, which you usually admire from a distance, is a rare experience in a dancer's career."

Kousouni first met Kritharioti when she created costumes for the Greek National Opera's production of Romeo and Juliet. So when
the designer asked Kousouni to choreograph and perform in her ballerina-inspired Autumn/Winter show at Couture Fashion Week, she immediately said yes. "I trust her and jumped in without a second thought because of her professionalism, aesthetic and her artistic point of view," says Kousouni. 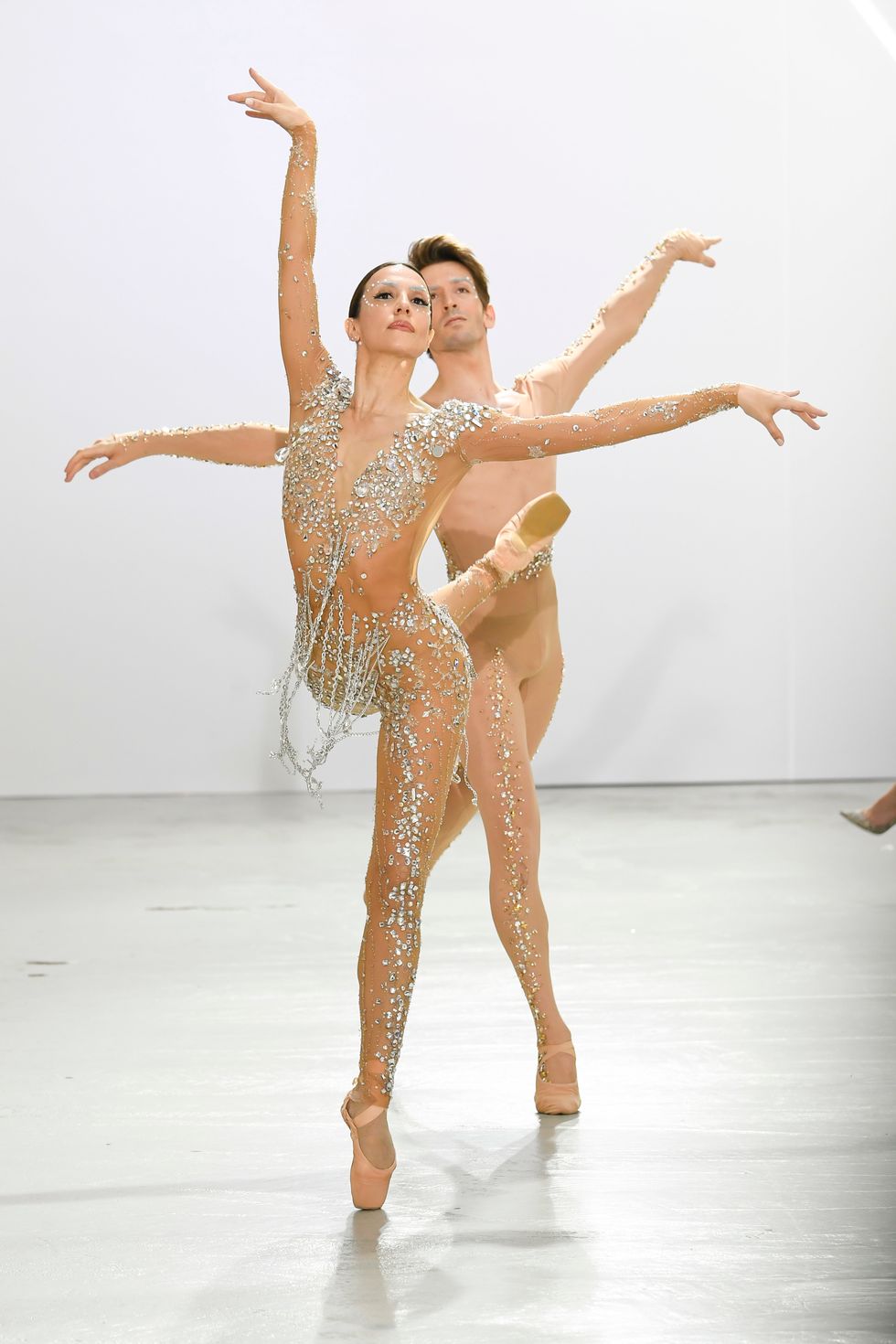 Kousini with her husband and dance partner Vaggelis Bikos take to the runway.

But she soon found out that choreographing for a runway show brings unique challenges. Kousouni and her husband, dancer Vaggelis Bikos (who performed with her at the show), visited the venue a couple of months in advance to get an idea of what to expect. They focused on creating flatter choreography that would help them travel down the narrow runway space. Kousouni also notes that while costumes for traditional ballet performances are designed to show off movement, in this instance her choreography needed to show off Kritharioti's designs. "My interpretation as a dancer should not disturb or take over, but only compliment the clothing," she says. "We were so lucky to witness the craftsmanship and the details that go into creating couture clothing. Seeing each stone and feather attached by hand made us more aware of the lines and movements that would best show off all that hard work."

One of the hardest aspects of the performance, says Kousouni, was dancing so close to the audience members, and the near constant photography flashes proved distracting. They also had to contend with the floor being slippery and harder than the opera house stages they're used to. (Kousouni rubberized the tips of her pointe shoes to prevent slipping.) But in some ways, she found adapting to the new environment thrilling, and she emphasizes that versatility is an important part of being an artist. "As a dancer I always try to understand and respect the concept and try to be one with the environment and the team around me—artists should understand the time and space they're in."

Kousouni found the whole experience refreshing because it gave her new challenges and allowed her to experience dance in a completely different environment. "Dancing on the runway, wearing haute couture—it was like performing for the very first time." She adds that as long as pop artists and fashion designers continue to introduce their audiences to ballet with respect, it can only be a good thing for the ballet world.