NYCB Corps Member Devin Alberda Has a Passion for Photography

You can thank Kanye West, in part, for inspiring New York City Ballet corps member Devin Alberda to pursue his budding passion for photography beyond Facebook profile pics. It was during the Yeezus Tour that West, whom Alberda calls “a real role model of mine," gave a sermon about believing in your vision. “That's when I decided maybe I could do more than I thought with the photos," says Alberda.

Not long after, a photography editor at The New York Times, who had discovered Alberda's impressive Instagram feed, approached him to publish a spread of photos in the paper—a major vote of confidence for the mostly self-taught shutterbug. “It's been really cool to have people believe in the work I do," he says.

Alberda, 29, calls photography a form of “identity expression," a way to engage thoughtfully with the intense, insular and high-pressure world of an elite ballet company. His spread in the Times depicted the focused and playful backstage life of his fellow company members, capturing the quiet moments, secret smiles and personal preparations. But first and foremost, Alberda is a dancer, part of the NYCB family.

He almost wasn't. After growing up in Ohio and training at the School of Cleveland Ballet, Alberda was accepted to The Juilliard School, where he planned to study a variety of dance styles. But the summer before classes began, he was accepted to the School of American Ballet's summer program. He was then invited to stay for the year, which turned into an apprenticeship with the company and a corps position in 2006. 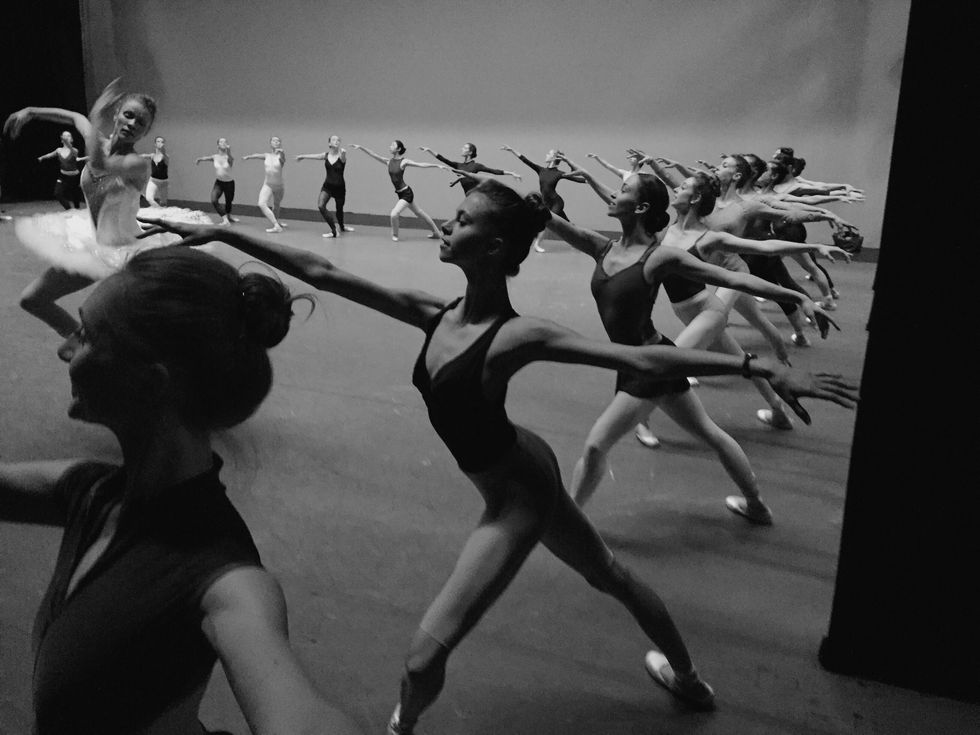 Click through to see some of Alberda's behind-the-scenes photographs. Courtesy Alberda.

Since then, he has had the opportunity to taste from the broad spectrum of NYCB's repertoire. Prized experiences include George Balanchine's avant-garde Episodes, Wayne McGregor's quick and spiky Outlier and Justin Peck's In Creases.

Alberda has also dabbled in choreography, recently creating a solo called Individuate, inspired by, among other things, the dark sci-fi film Ex Machina. “I've always been interested in how technology might lead us to a different stage of humanity," he says.

That kind of existential questioning and the thrill of poking around in shadowy places informs Alberda's recent photography, which is mostly black-and-white, like an X-ray. “I'm a documentary photographer," he says. “I try to find beautiful images as they happen."

Others beyond the ballet world are taking note: The publicist of Hollywood producer Scott Rudin requested Alberda's photographic services at rehearsals of his upcoming Broadway musical Shuffle Along, which Alberda has found fun and fulfilling.

Despite such opportunities to flex another creative muscle, in some ways it seems photography is a placeholder for the autonomy and exploration Alberda craves as a dancer. “I'd like to find myself dancing roles where I can express myself more readily," he says. “There's something that changes when you get to make decisions as a soloist. I'd like to be given more of those opportunities."

Photo tools: His Instagram photos are shot on an iPhone 5 or 6, but he recently got a new camera—a Leica MP. “I'm really excited about it," he says.

Favorite author: Science fiction writer Samuel R. Delaney. “He imagines a world that is a little freer of the constraints of identity politics."