Pacific Northwest Ballet principal Noelani Pantastico was returning to dance after an injury when she made a "rookie mistake": After three months of intensive physical therapy to deal with an osteochondral defect—which caused damage to the cartilage and bone of her left ankle—she jumped into a rehearsal for Balanchine's Theme and Variations. She hurt her Achilles tendon, leading to another month and a half of recovery. "I was so excited to get back that it blinded me," says Pantastico.

Foot and ankle injuries can plague dancers at any level, even the most accomplished principals. If you are experiencing pain or concerned something's wrong, it's important to see a doctor for a diagnosis. But knowing the symptoms of some of the most common injuries can help lessen the sting if your dancing is temporarily derailed. We've broken down the symptoms, causes and pathways to recovery for several foot and ankle issues that ballet dancers may encounter. 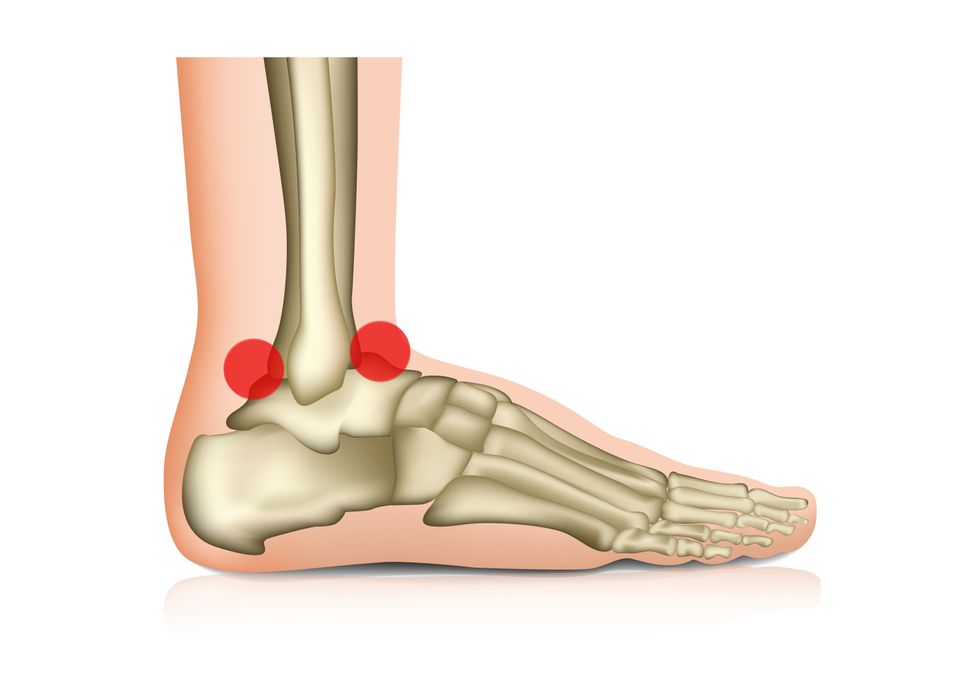 Cause: An impingement is an inflammation of the soft tissue, a compression of structures or—in extreme cases—a bony impingement, which is known as os trigonum syndrome (see next section). It is generally caused by repetitive compression at the front of the joint (like demi-plié) or at the back of the joint (when pointing your foot). Some of the problem is also often due to tight hamstrings, which pull the fibula and ankle bone out of proper alignment, says Dr. Frank Sinkoe, podiatrist for Atlanta Ballet.

Recovery: The healing process depends on the severity of the injury, explains Nasrallah. She begins with conservative treatments for temporary pain relief: "Ice is your go-to after dancing, not prior to," she says. Nasrallah recommends anti-inflammatories and performs electrical stimulation and ultrasound therapies to help manage pain. But she will also address the dancer's mechanics to figure out the root cause: What muscles are tight? How is compression being created? Are the calves, hips and core strong? All of this correlates to the knees and ankles. Hypermobility may also be a contributing factor. 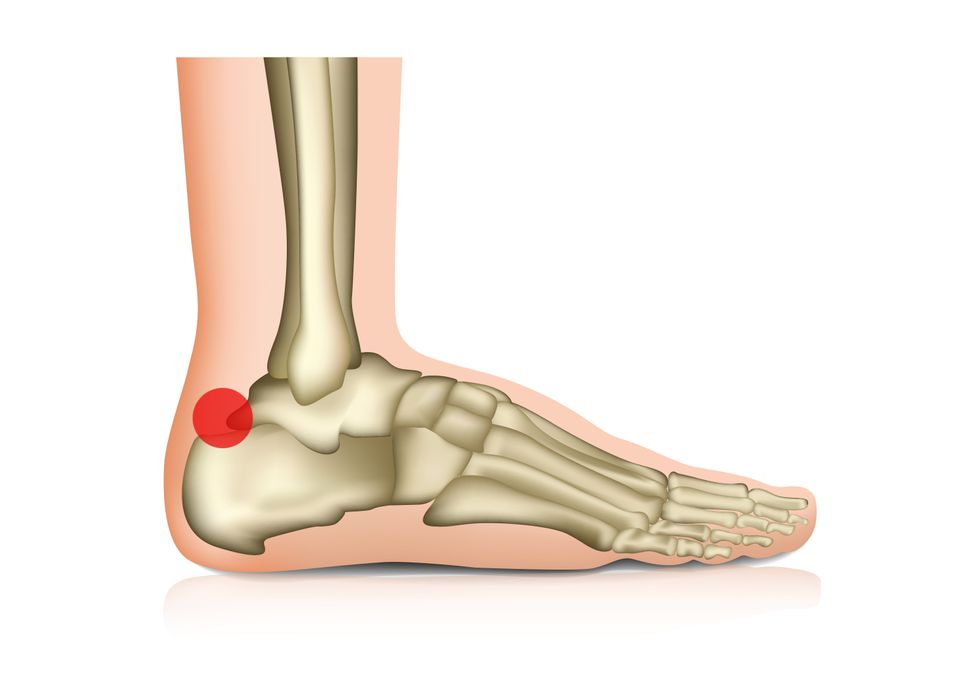 Symptoms: Some people have an os trigonum, a small extra bone located behind the ankle bone. It can get pinched between the ankle and heel bones, causing pain, swelling and tenderness in that area.

Cause: Dancing is not to blame. "An os trigonum is not a problem in and of itself," says Sinkoe. "It's an accessory bone that can form in anybody." That said, it may be aggravated by pointework and can get locked up by overuse and/or tight hamstrings and calves.

Recovery: If the pain isn't severe, "I recommend that dancers stretch the hamstrings," says Sinkoe, mentioning that walking backwards flat-footed can help relieve tension. Some dancers with os trigonum syndrome can be treated conservatively with physical therapy, but this depends on the size and location of the bone and the severity of symptoms. Though Sinkoe doesn't generally recommend surgery to remove the extra bone, it may be required in some cases. 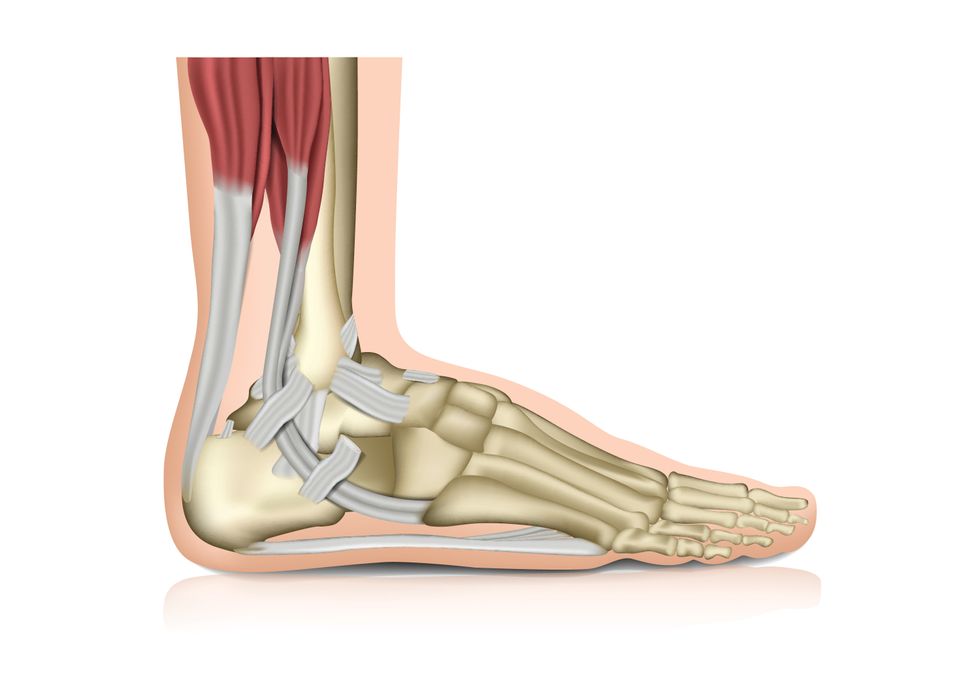 This term refers to a broad spectrum of tendon injuries, including Achilles tendonitis, which is acute inflammation of the tendon.

Cause: Tendinopathies are most often caused by the repetitive overloading of a tendon. "Our tendons and bones are designed to support an increased load," Nasrallah says. When you gradually increase the load on a healthy tendon, it can adapt. (Muscles need a minimum of 48 to 72 hours to recover when more stress is put on them.) But when a change comes on suddenly—for example, by ramping up the number of hours you're dancing a day or by jumping back into training after an extended break—the tendon doesn't get enough time to recover and fails to "rise to the challenge of the increased load," she says. Tendinopathy can also be exacerbated by incorrect mechanics: If you don't put your heels down when landing jumps or you have tight lower leg muscles, you are more prone to this type of injury.

Recovery: Nasrallah recommends a combination of ice, ultrasound and electrical stimulation for pain relief, and massage and myofascial release for recovery. But she also stresses taking on a modified load. "Remove the exacerbating factor—go off pointe for a time, or stop jumping," she says. You might take a full class one day and only barre the next. Since complete unloading can cause other problems, Nasrallah does not usually recommend wearing a walking boot. 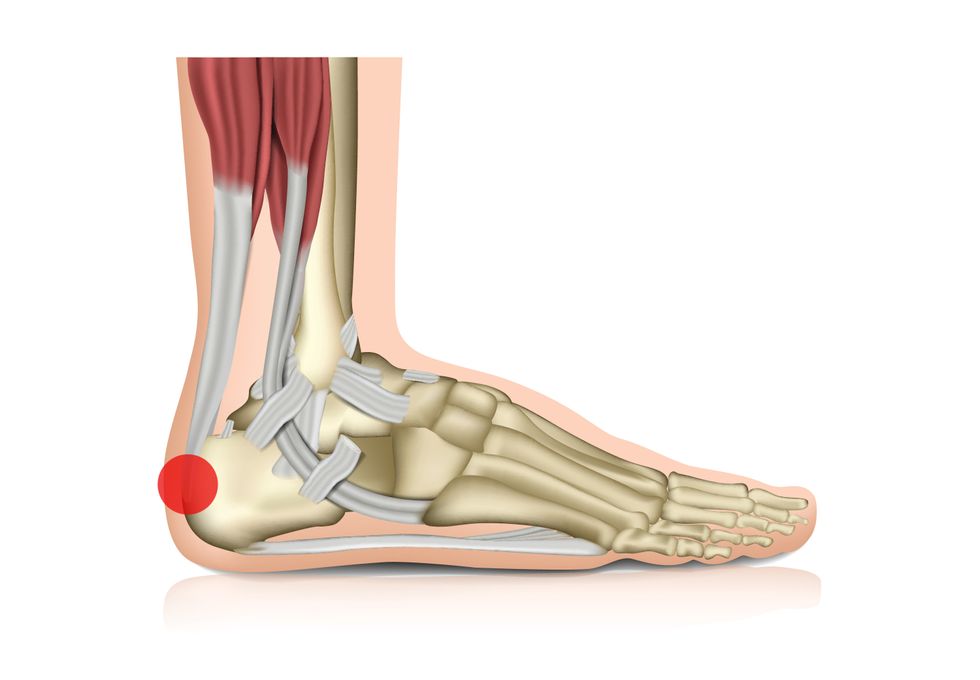 Symptoms: A bursa is a normal anatomical feature, says Sinkoe. It's a little fluid-filled sac that acts as a cushion between a bone and a tendon to reduce friction. They exist in areas where a bone might come into contact with a direct surface, like the floor or a badly fitted shoe. If increased pressure is put on the bursa, it swells. It can be warm, red and tender to the touch.

Cause: The most common location of bursitis in the foot is between the heel and Achilles tendon, a condition called retrocalcaneal bursitis. The bursa gets inflamed by repetitive load or direct compression underneath the Achilles tendon. In ballet dancers, this is often caused by ill-fitting pointe shoes or drawstrings tied too tightly.

Recovery: Finding better-fitting pointe shoes, or adding padding, is paramount. Ice will help with pain relief, and a clinician should assess for poor mechanics that may be contributing to the problem. If over-the-counter anti-inflammatories don't help, a physician might give you a localized corticosteroid injection to decrease inflammation. However, Sinkoe advises against this since it may cause a rupture of the Achilles tendon. 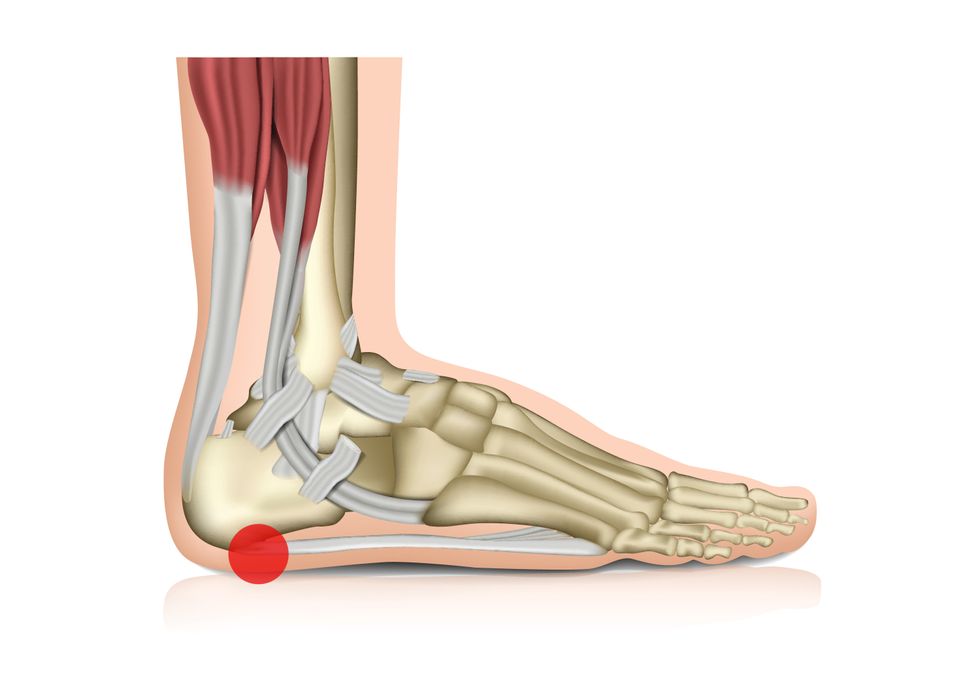 Symptoms: The telltale sign of plantar fasciitis is pain first thing in the morning, says Nasrallah. Your first few steps can result in an intense, stabbing pain on the bottom of the heel or arch.

Cause: When you sleep, your feet fall into a slightly pointed position, which puts the plantar fascia in a relaxed position. (The plantar fascia is a thick layer of fascia that runs along the bottom of the foot, explains Nasrallah. It starts at the base of the heel bone and connects to the toes.) When you step on it in the morning, you are stretching it out right away. If there is inflammation of the plantar fascia, flexing will cause pain and irritation. Plantar fasciitis can also be caused by tight hamstrings and calves.

Recovery: Nasrallah recommends wearing night splints, which put the foot in a flexed position. Warming up the foot with stretching and massage first thing in the morning, before putting weight on it, may also relieve symptoms. Nasrallah also looks for issues up the chain, stretching out tight points in the feet and calves. Dry needling and foot-strengthening exercises can also help. When you're not dancing, wearing properly fitting, supportive footwear is key. 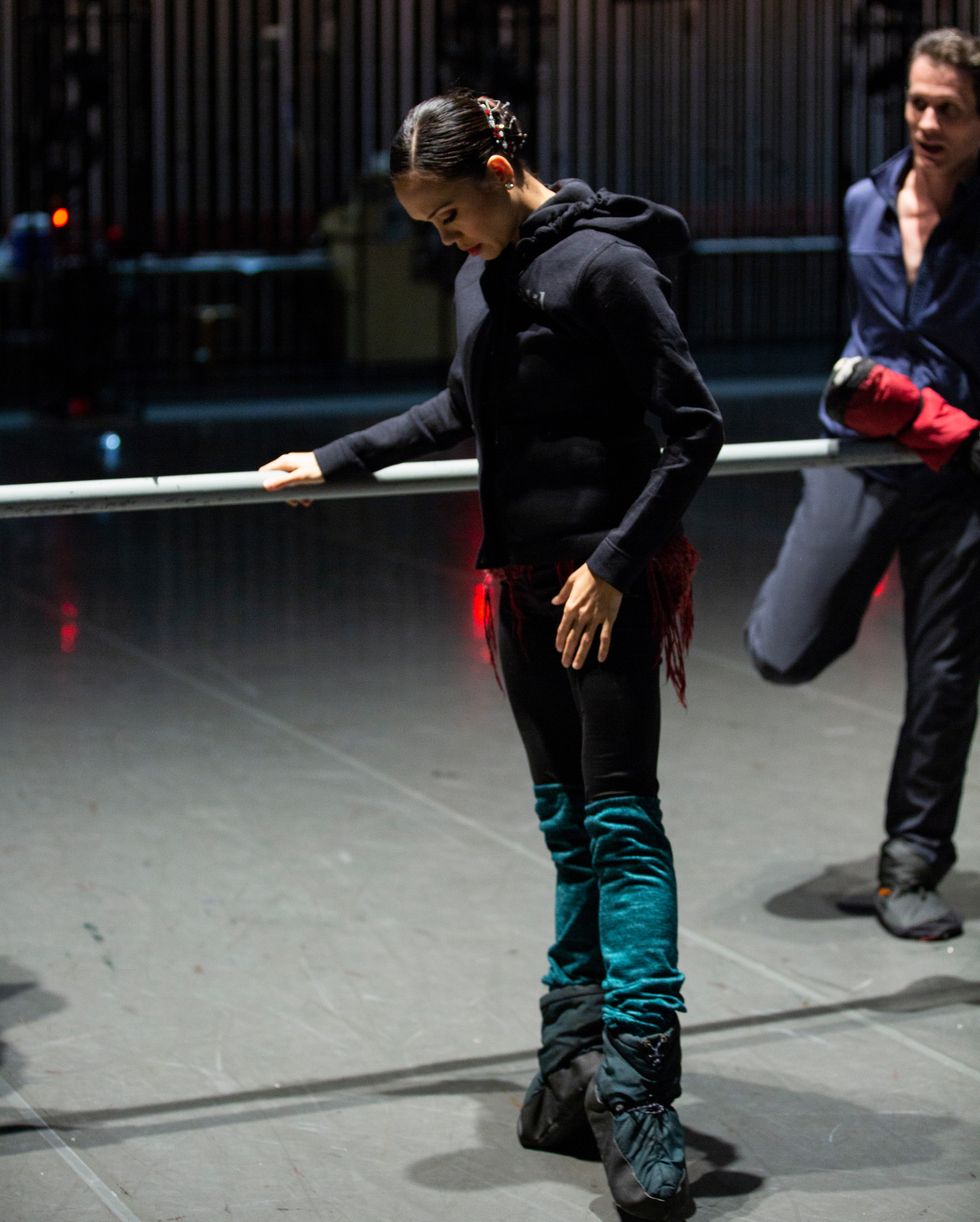 Prevention Is the Best Medicine

Preventing foot injuries isn't just about caring for your feet. "Dancers need to think about their bodies as a whole, functional unit," says Sinkoe. He offers these suggestions for keeping foot and ankle issues at bay:

1. Don't force turnout. Always work from the hips, not the feet or ankles. Pushing can lead to injuries.

2. Target tightness with myofascial therapy. Use a foam roller to ease tight muscles and break up trigger points.

3. Strengthen. The feet, yes, but mostly the core, legs and hips.

4. Examine your pointe shoes. "Spot the wear patterns," says Sinkoe. "Are you winging or sickling?"

6. Ice as soon as you feel pain. "The earlier, the better," says Sinkoe, who recommends using ice as an anti-inflammatory. "If you're having symptoms, don't ignore them." When necessary, ice 10 minutes three times a day.

But the most important advice? Listen to your body. "I've seen a lot of dancers keep pushing because they aren't listening to the injury," says Pantastico. "I'm looking at the end of my career in the next few years, and I want to be able to walk and live a normal life after! It's hard when you're young and you just want to dance. But you must listen to what your body is telling you."

Related Articles From Your Site
Related Articles Around the Web
feet foot injuries noelani pantastico
If you like us online, you'll love us in print!
Instagram
Pointe Magazine