Coming to America: 3 Dancers on Why They Moved to the U.S. to Pursue Ballet Careers

American Repertory Ballet's Ryoko Tanaka remembers her first class in the United States. She was 18 years old and a scholarship student at the Milwaukee Ballet summer intensive. "At barre, I reached out during demi-plié, and I saw the guy across from me in the class. I could tell he was enjoying himself. I could tell these people loved ballet. And I felt I fit." From then on the Japan native, now in her first season as a full company member with ARB, was certain the U.S. was where she was meant to make her career.

For dancers like Tanaka who cross borders to join American companies, the challenges of being far from home, adjusting to a new culture and navigating visa applications quickly become a fact of life. Yet, as these expat dancers' stories show, with a little patience, dancing abroad can be an incredible adventure.

What draws dancers to the U.S. to dance? For Tanaka, it was a sense artistic fulfillment and community—something she hadn't felt during her competition-focused training in Japan. On the other hand, Azamat Asangul, a Festival Ballet Providence dancer from the Kyrgyz Republic, left his home seeking adventure and new challenges. After graduating from Bishkek Choreographic School at 18, Asangul auditioned for the Vaganova Ballet Academy in St. Petersburg and was accepted into the school's highest level. "I bought my flight ticket one way," he says. Soon his "one way" philosophy led him to companies in Moscow, South Korea and eventually the U.S., where fresh challenges, like the mix of classical and contemporary repertoire and the opportunity to learn English, enticed him to stay. 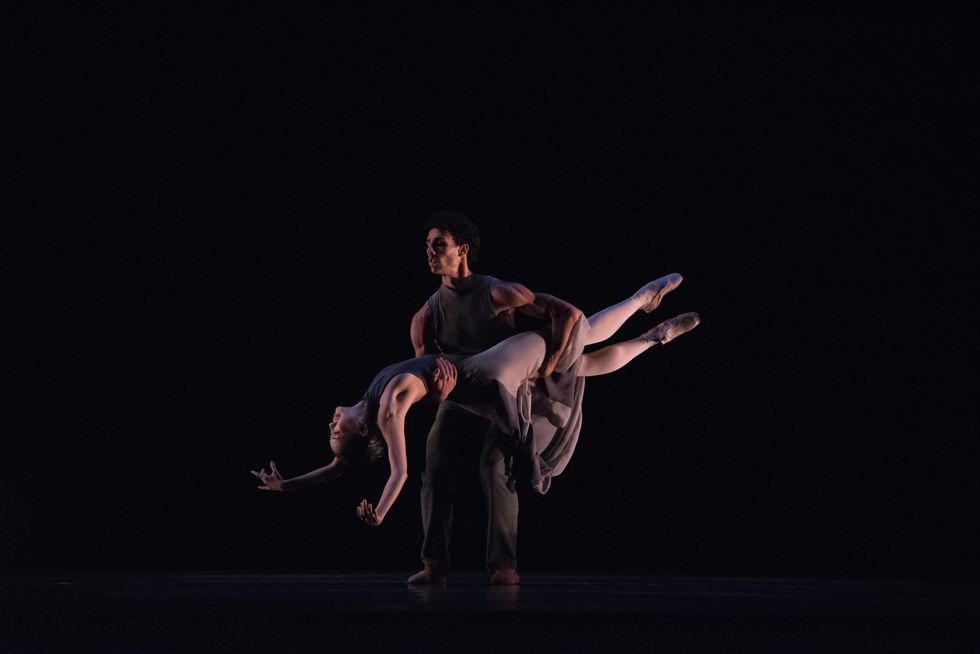 Thai dancer Gift Sapianchai also moved here for a new experience, although she never intended to have a dance career. Growing up in Bangkok, where the project-based Bangkok City Ballet is the country's only ballet troupe, Sapianchai expected to stop dancing after high school and get a "regular" degree from a local university. But her path changed course when, at 15, her dance teacher encouraged her to apply for the Kirov Academy of Ballet's summer intensive in Washington, D.C. The summer program was full, and she was accepted into the school's year-round program instead.

"I thought I was going to go for a year, just to see what it was like," says Sapianchai, but the experience opened her eyes to the possibilities of dancing professionally, and she stayed. Seven years later Sapianchai has a BFA in dance from Butler University and a season with Kentucky Ballet Theatre under her belt. 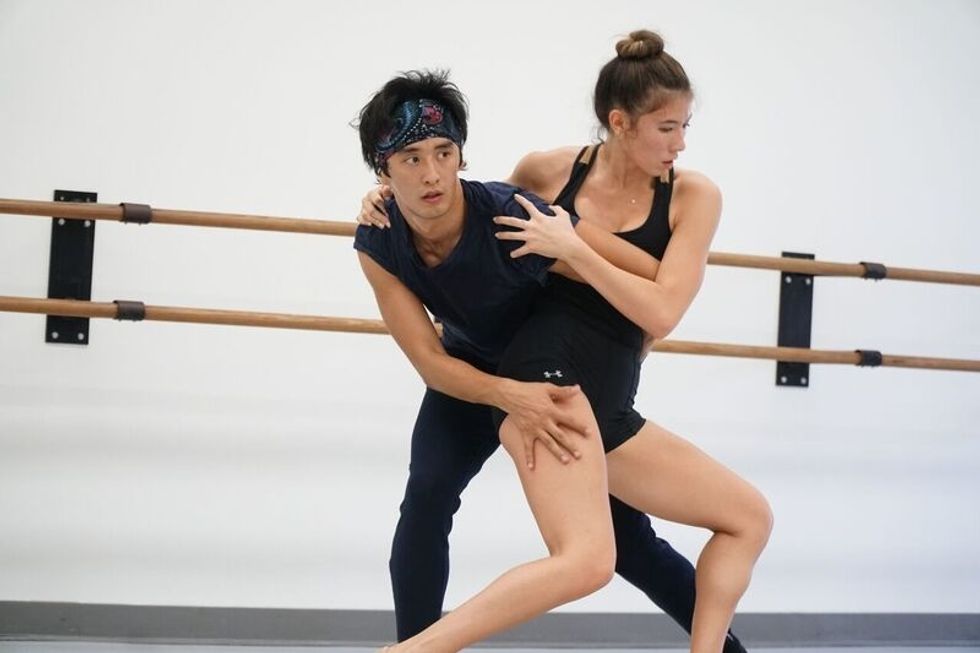 Despite the thrill of a new country, Sapianchai recalls the mental challenges of being oceans away from home at 15. "The physical challenge is already so tough, and you don't have your family supporting you by your side," she says.

While Sapianchai already spoke English, Tanaka and Asangul struggled to learn the language. Thinking back to her first year with Milwaukee Ballet II, Tanaka says, "I wish I could go back, because I know I could do better. But I was just learning so many things all at once." Asangul fondly credits his first artistic director in the U.S., Miki Ohlsen of Island Moving Company, for helping him learn English. She even let him live in her house as he adjusted to the new country. 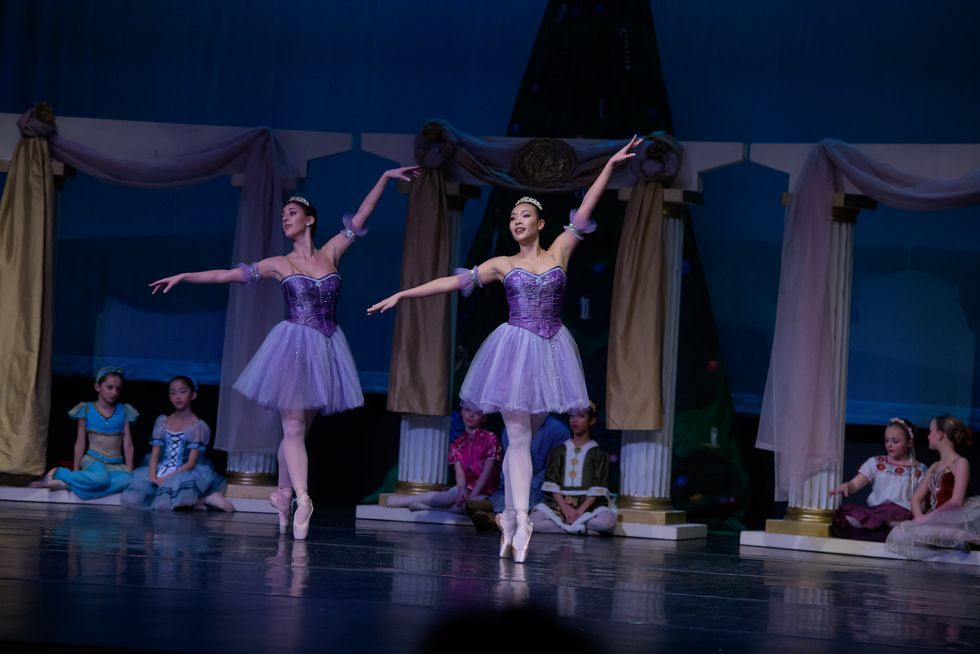 Brooke Mello (left) and Sapianchai in The Night Before Christmas

All three dancers admit that the distance from their families takes a toll. The difference in time zones makes it hard to talk, and travel is expensive and inconvenient. For Asangul, his career in America came at an incredible family sacrifice: When his brother, a police officer in the Kyrgyz Republic, died in the line of duty, his parents spared him the news until services were over so he wouldn't feel obligated to return home and risk derailing his visa, which was still in process.

As Asangul experienced, the legal technicalities of a career abroad often have complications that are beyond dancers' control, no matter how determined and eager they are. In order to work professionally in the U.S., international dancers need to obtain a work visa. They usually need a lawyer to help prove they have the requisite "extraordinary ability" and thorough work experience, as well as a director and company with resources willing to take a chance on their talent. 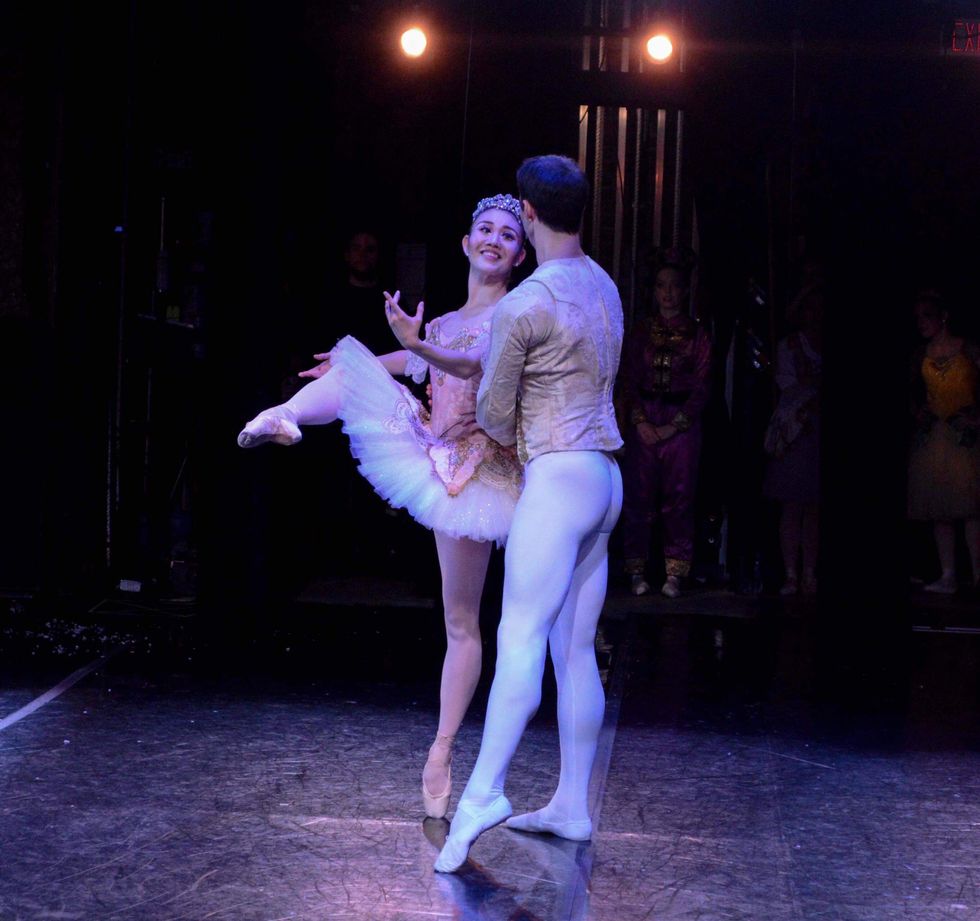 Tanaka with Journy Wilkes-Davis in Nutcracker

Tanaka danced with Milwaukee Ballet II on a student visa, but when she couldn't secure a contract for the following season she had to return to Japan. For almost three years she worked in a café, saving up to go to the U.S. every audition season. But open auditions can be even tougher for international dancers, where directors may screen out those not pre-approved to work here. Tanaka finally caught her break when she emailed ARB's now former artistic director Douglas Martin about her situation. Martin invited her to join ARB's trainee program at its affiliated Princeton Ballet School, on a student visa, with the promise she would get ample performance experience and soon earn a work visa.

Sapianchai is now in a situation similar to Tanaka's. While she attended Butler on a student visa and danced with Kentucky Ballet Theatre during her Optional Practical Training year (a program that allows international students to work in the U.S. for a year after graduating, without going through the formal visa process), she doesn't have a work visa for next season. She's returning to Thailand, where she'll be performing with Bangkok City Ballet and teaching for Dance Space by Ant, a path she never would have imagined before moving to the U.S. "It's opened up a lot of opportunities for me here in Thailand," Sapianchai explains. The performance exposure from gigs and galas with Bangkok City Ballet will also make her a more competitive work visa candidate in the U.S., or any other country, in a few years. "I'm not ready to give up just yet," says Sapianchai. 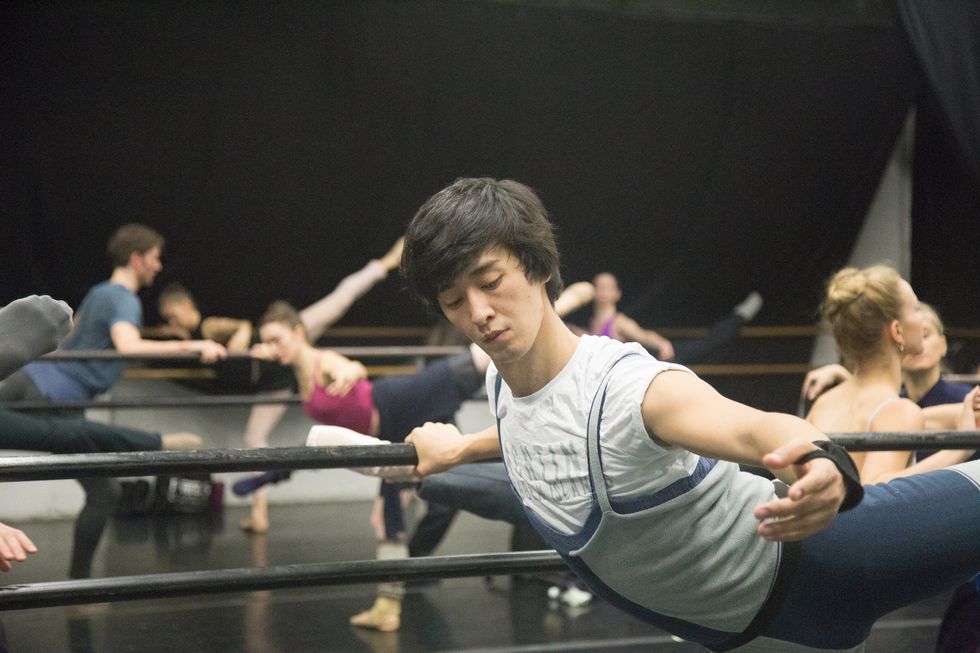 Tanaka and Asangul also agree that the U.S. was the ideal place for them to grow, both as dancers and as individuals. "It's the perfect place to make connections, and there's so much opportunity to express yourself," says Asangul. For all three of these dancers, their adventurous spirits remain and the world seems wide with opportunities, their attitudes summed up by Asangul's motto: "Wherever there is ballet, I will go."