When Claire Kretzschmar's 97-Year-Old Grandfather Couldn't Travel to See Her Perform, She Brought NYCB Dancers to Him

New York City Ballet soloist Claire Kretzschmar has had the chance to perform just about everywhere: New York, Los Angeles, Paris, Shanghai, you name it. But one of her most inspiring performance opportunities came a little less than a month ago, dancing with her friends on the wooden floor of a repurposed exercise room in front of 80 captivated residents at the Village Green Retirement Campus in Seattle.

Claire Kretzschmar on Instagram: “{the} Village Green Dancers take Seattle✌🏻#VGD This past weekend we gave our debut performance at Village Green retirement home, where my…”

Shortly after finishing up NYCB's spring season, Kretzschmar and two of her fellow company members, corps de ballet member Clara Miller and soloist Aarón Sanz, took the trip out to Seattle to visit Kretzschmar's grandfather at his retirement home. Together, the three dancers performed a short demonstration of ballet technique and partnering, ending with an audience Q&A.

This wasn't Kretzschmar's first performance at Village Green—she's done similar demonstrations twice before on her own. She was originally inspired to stage these performances by her grandfather, a 97-year-old World War II veteran who loves to dance, and even takes line dancing classes three days a week.

"It's a meaningful gift to give to my grandpa and to the other people at the retirement home," says Kretzschmar, "They don't have easy access to see dance like this, because a lot of them are less mobile, but they still want to live a full life. I thought this was just a simple, small way of bringing ballet to them." 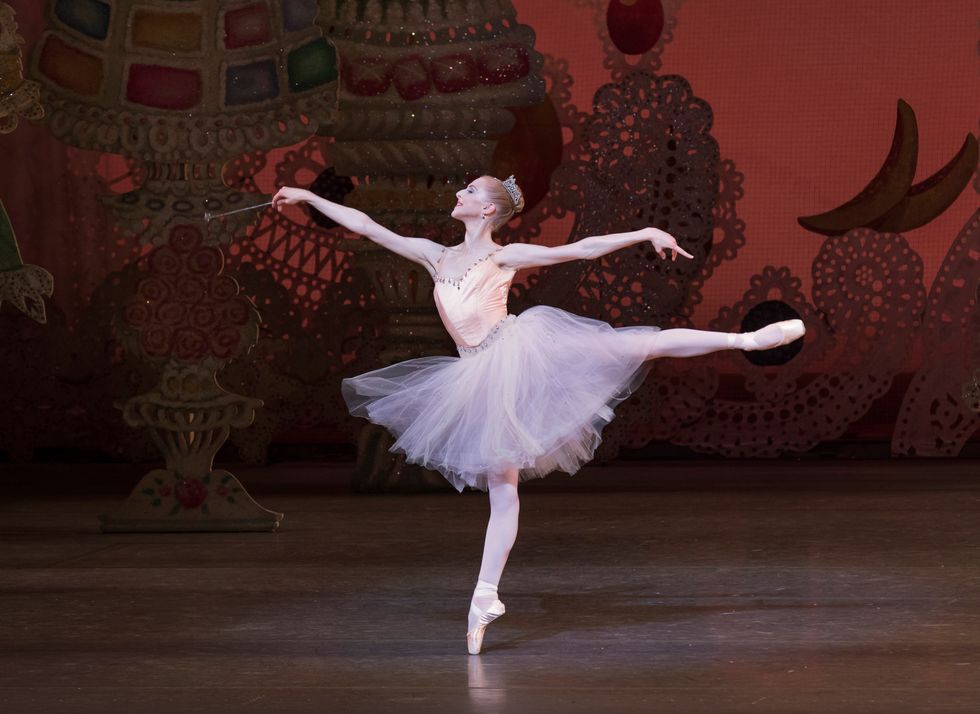 Kretzschmar as the Sugarplum Fairy in George Balanchine's The Nutcracker

While the Village Green Dance crew (VGD, as coined by Kretzschmar, get it trending!) might be a fledgling operation right now, Kretzschmar has high hopes for what it might become. In the future, she would be interested in building an outreach program for the elderly, bringing more dancers and more ballet to retirement home residents.

"Seeing their reactions to having the three of us come out there, and how even that number made it more exciting," she says, "I realized that the elderly is a really underserved community, and we have these gifts that we can share with them."

For Kretzschmar, one of these gifts, and the highlight of the demonstration, was being able to dance with her grandfather. Before they began, her grandfather pulled her aside and asked if she would be willing to perform the "Tennessee Waltz" with him.

"Fortunately, I knew what to do. I had music on my phone, so I found the 'Tennessee Waltz,' and I said, now I would like to welcome my grandpa up to dance together," she says, "We didn't even have to rehearse, because grandpa knows how to waltz!"