Cassandra Trenary: Why the ABT Soloist Has Us Spellbound

This is Pointe's June/July 2016 Cover Story. You can subscribe to the magazine here, or click here to purchase this issue.

It seems that, in ballet careers, everything happens at once. For a few years, you notice a dancer and make a mental note: “She's got something." And then, before you know it, she's everywhere. And so it was last year for American Ballet Theatre's Cassandra Trenary, 22. In the blink of an eye she graduated from promising young dancer—I remember spotting her as she led the Shades in La Bayadère with unrelenting precision—to nascent star. She performed her first classical solo, in Raymonda Divertissements, in 2014. Then, in one year, she debuted the roles of Princess Florine and Diamond Fairy in Alexei Ratmansky's new The Sleeping Beauty, the youngest sister in Antony Tudor's Pillar of Fire, the sleep-dancing young woman in Le Spectre de la Rose and a lead role in Marcelo Gomes' new AfterEffect. Last August, she was promoted to soloist.

Physically, it was a challenging year. “I felt like crap!" the relaxed, forthright Trenary answered recently at a café near ABT's studios when asked what it felt like to learn so many roles in quick succession. “But I love to dance, and I just ran with it." Trenary—a petite brunette with big, lively eyes and strong features that read particularly well onstage—emanates energy and directness. No matter what role she dances, she's dynamic and strong, a force to be reckoned with. 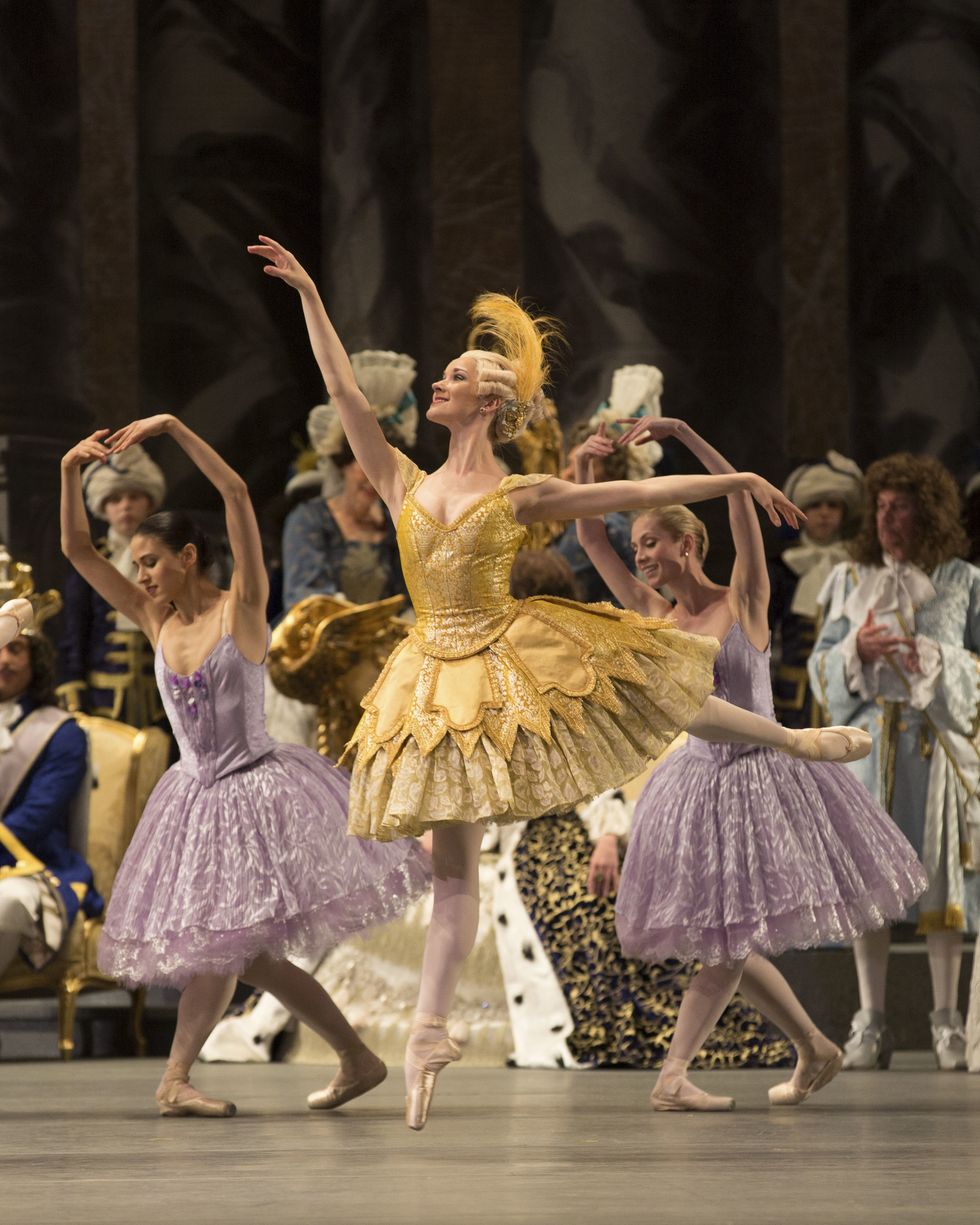 Trenary as the Canary Fairy in "The Sleeping Beauty." Photo by Gene Schiavone, Courtesy ABT.

“She's a real person and it's fun to be in the studio with her," says James Whiteside, a principal in the company who is also a close friend. “We work our butts off, but it never has that neurotic edge," he adds, with a laugh. That ability to maintain a level head has served her well in recent months as she prepared for her biggest assignment to date: the role of Princess Aurora in The Sleeping Beauty. For the first time, she has to carry the whole show, in a purely classical idiom.

It has taken an adjustment. “I need to be bigger, and to make every step extremely important," she said after a rehearsal in February, before her April 2 debut in Detroit. (Her New York City debut will take place June 29.) Particularly in this production, which emphasizes delicate musicality over showy virtuosity, she has had to find a new lyricism, a way to make the steps sing, like notes in an aria.

In rehearsal, Trenary and Whiteside worked through “The Vision" scene, in which Prince Désiré imagines Aurora calling him to her bedside to free her from Carabosse's spell. Even after a long day of rehearsals, Trenary looked fresh and alert, unfazed by all the information coming her way. The moment the pianist placed his fingers on the keys, her body and face changed—she became someone else. Breathing into her port de bras, she gazed into her partner's eyes with a look full of curiosity and longing. How could a prince resist?

The ballet master, Keith Roberts, gave her tips on how to make her performance register even more. The unifying principle was: let go. “You have to forget how you ran with other women, and run by yourself. You can be you now," he said at one point. With each take, she seemed to expand and soften. Instead of overthinking technical details, she trusted the music and the feeling of the steps to carry her, relying less on the mirror and more on internal sensations. She also asked a lot of questions, rather than wait for suggestions. 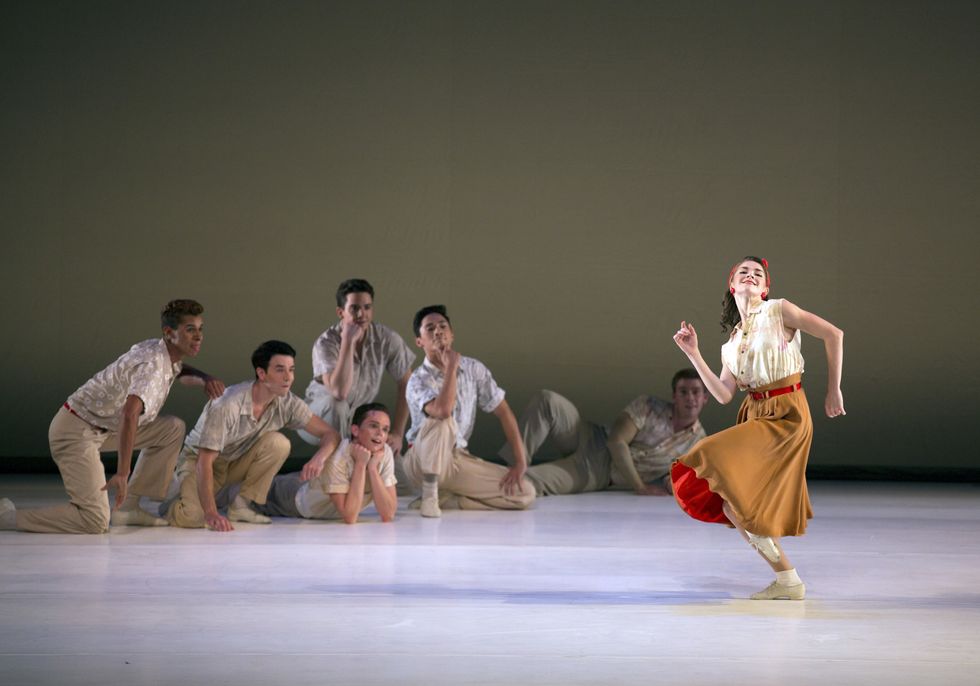 Trenary in "Company B." Photo by Rosalie O'Connor, Courtesy ABT.

“She is an unusually self-possessed and focused artist who knows how to learn," says artistic director Kevin McKenzie, who offered her a spot as an apprentice in 2011, when she was 17 and still a student at ABT's Jacqueline Kennedy Onassis School. (She skipped over the ABT Studio Company, the usual stepping stone for promising candidates.) She had come to the school from Georgia, where she grew up with a younger brother. Her father owned a used-car dealership; her mother worked in real estate and retail. Trenary got into dance early, at 3, and started taking class at the Lawrenceville School of Ballet. But her training was eclectic, and she wasn't a bunhead; she did ballet, jazz, tap, modern dance and hip hop, but also tried horseback riding and tae kwon do. In fact, before being spotted at ABT's summer intensive and invited to study at JKO (at 15), she had only been taking ballet three times a week.

At the school, then artistic director Franco De Vita and faculty member Raymond Lukens immediately sensed her potential. “From the moment we saw her, there was something special about her. She was luminous," says Lukens, who cast her in one of his own works. Because of her varied training, she was placed with dancers two years younger than her. It took her a year to catch up to the other students in her age group. Her confidence flagged—“I started comparing myself to other people, which is super-unhealthy," she says—but she had the benefit of having her family around her. Her parents had quit their jobs, sold everything and moved up to New York. Even the family dog made the trip. “They didn't want me to come alone," she says, “and they looked at it as an adventure." (After she joined the company, they moved back south, to Florida.) 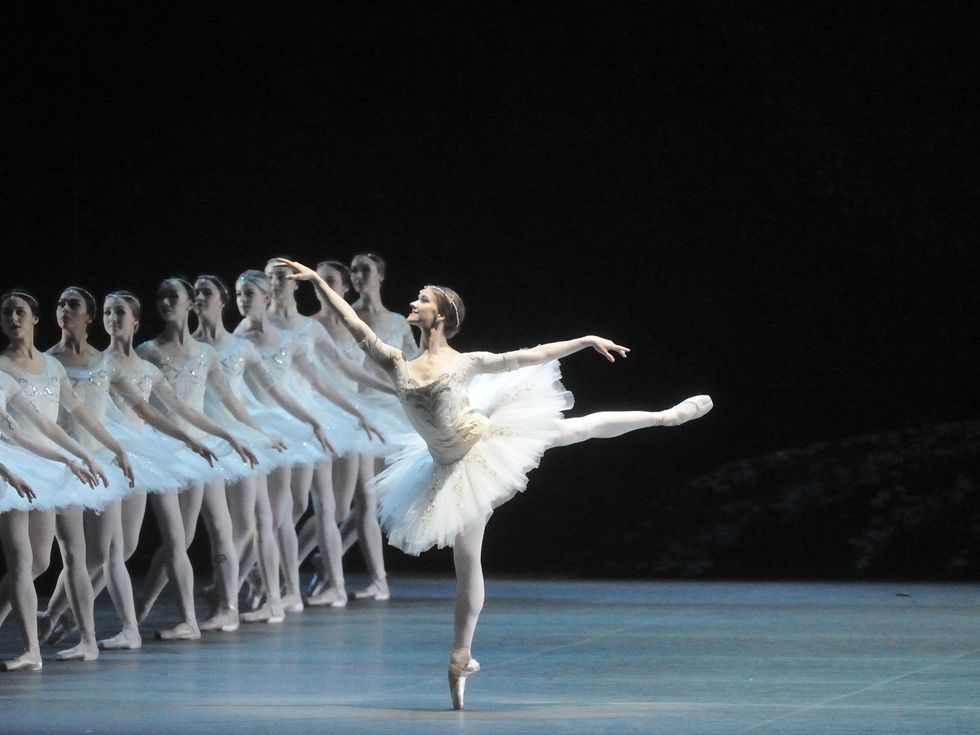 Trenary in "La Bayadère." Photo by Gene Schiavone, Courtesy ABT.

Perhaps that's why family and friendships are so important to her. In 2014, after a difficult year in which she slowly recovered from one injury (a fractured metatarsal) only to be beset by another (a bulge in her cervical spine), she married fellow ABT dancer Gray Davis. Through the eight months of recovery, he encouraged her and helped buoy her spirits. “I had a lot of couch time," she says, and a lot of time to think. She took some acting classes, even joined the cast of a play and considered going back to school. Meanwhile, her desire to dance grew even stronger.

Both Trenary and her husband are regular churchgoers; the habit, she says, is “a reminder to love each other a little more." That love and the sense of groundedness it inspires may help to explain why she seems so comfortable in her own skin. She thrives on work with contemporary choreographers (like Gregory Dolbashian, Ratmansky and her fellow ABT colleague Gemma Bond). She has appeared with Daniil Simkin's pickup group INTENSIO. She even made a dance video, “Wallflower," with Whiteside, who moonlights as a pop/dance artist under the alter ego JbDubs. Watching that video, you would never guess that Trenary's day job is as a classical dancer. She looks unapologetic, strong and, in a word, sexy.

This year, in addition to The Sleeping Beauty, she'll be tackling the role of the doll-like bird in Ratmansky's The Golden Cockerel. In the future, who knows? It seems there's very little she can't do if she sets her mind to it. As she puts it: “I feel as though, more and more, every detail counts."

Related Articles Around the Web
cassandra trenary abt american ballet theatre cassie trenary
If you like us online, you'll love us in print!
Instagram
Pointe Magazine