I first saw Maria Seletskaya when she was dancing as a leading soloist in Europe. Years later, she sent me a video of herself with the Stuttgart Ballet—not as a dancer, but as a guest orchestra conductor! I found her work and this particular transition very exciting and so I brought it to the attention of David Briskin, musical director of the National Ballet of Canada (where I dance), to see what he would think.

Being a ballerina is certainly challenging on its own. But as Seletskaya negotiated a career transition that felt right for her, she opted to pursue another, equally demanding passion: music.

As of this year (and after a few preliminary performances with the company in 2019), the National Ballet of Canada has hired Seletskaya as its first conductor in residence. "Maria's experience as an international soloist combined with her ongoing training as a conductor has prepared her well," says Briskin. "She brings a unique perspective to conducting for dance."

Naturally, I wanted to catch up with Seletskaya to hear about her fascinating journey so far. 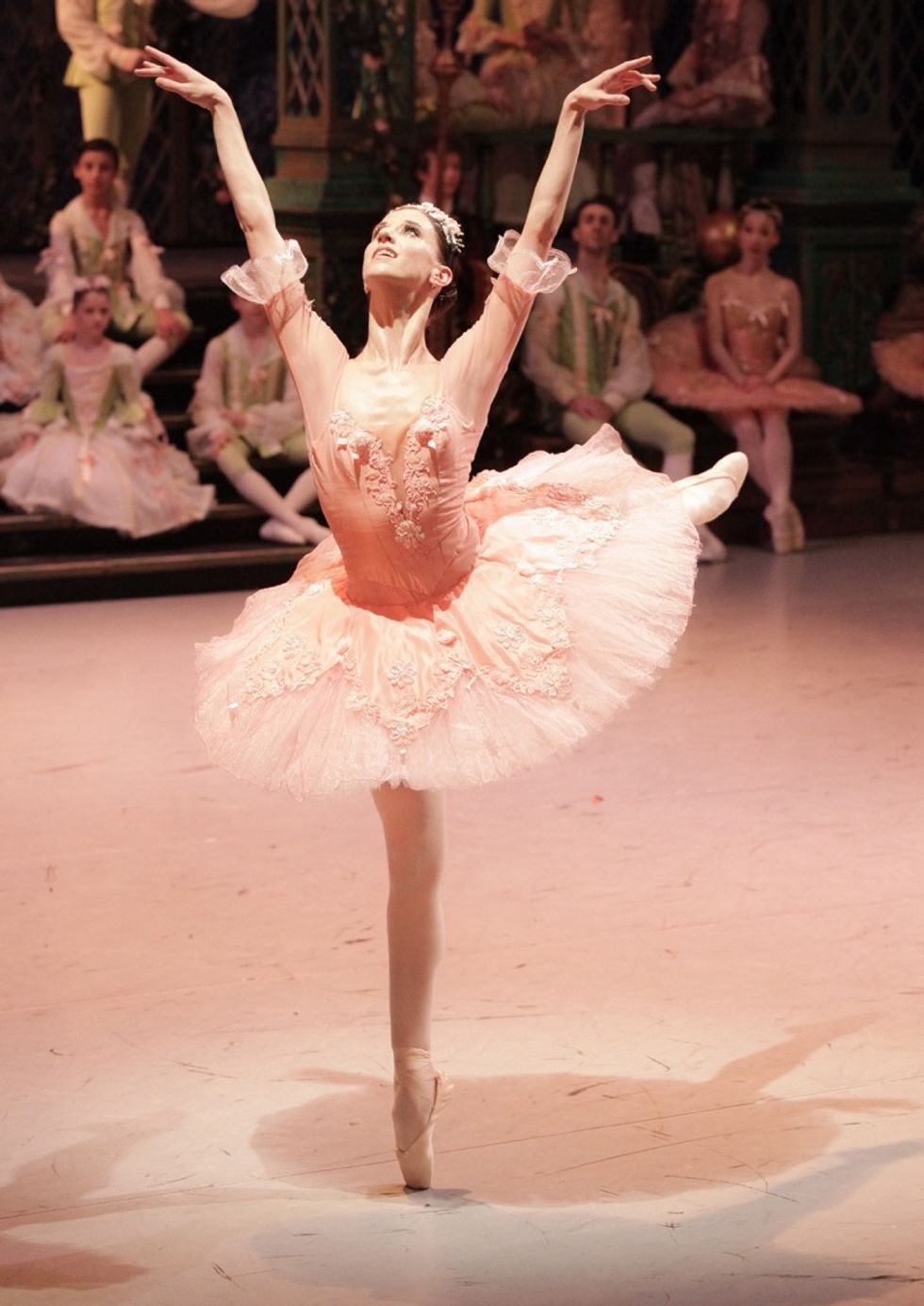 Maria Seletskaya during her ballet days

Tell me more about going from the barre to the pit.

Music has been my companion since I can remember. Like most of the kids born in the Soviet Union, I started attending children's music school, and studied piano. I participated in several competitions and festivals, and according to the teacher, had a significant talent. But life thought it would be a great idea to make me a dancer and took me the ballet school instead.

Throughout the years of ballet training, I continued to improve my piano skills, but did not consider music ever becoming prominent in my life.

During my first season in a ballet company, I started having more free time on my hands, and piano came back to my life in its full glory. I would stay in the opera house until midnight, practicing. Then, one day, I spoke with one of the violinists and said: "I would give two years of my life to conduct Nutcracker just one time. I cannot play in the orchestra, but I would love to know how it feels to make this wonderful music together." The violinist looked at me simply and said: "Why don't you just become a ballet conductor?"

And so it started. It took years for me to really understand that this is what I wanted to do; then it took more years to figure out how to combine my studies with a ballet career, and some more years to actually do the studies. And here I am now!

How many different directors did you dance for?

I worked in four ballet companies under six directors. All of them in one or another way contributed to my development, but the director I absolutely loved working for was my first director at the Royal Ballet of Flanders, Kathryn Bennetts. Professional of highest caliber, in good way obsessed with her mission. She was always there, ready, leading and inspiring us.

When asked once about how an orchestra treats you as a female conductor, you replied, "I am not simply a woman, but I am a ballerina." What did you mean by that?

(Smiles.) Oh, I remember! Back then, I was voicing my concern about not only being a woman in a (still) male-dominated profession, but also being a dancer! How often I feared that there would be a person in the orchestra, who could say, "But the king is naked!" Now I am starting to feel a little bit more confident, but the awareness will remain there forever as a vaccine against becoming arrogant. (Laughs.)

To be honest, I only see advantages of my ballet past: I have a particular niche in conducting, where I can fit well; I have quite a good working discipline and ethic; I have ambition and am good at taking criticism. While considered a norm in ballet world, these traits are perceived as something outstanding in other professions.

Do you feel significant differences when working with musicians compared to dancers?

Yes, absolutely! As a dancer, you are never alone: You take daily class together, you spend rehearsals either with colleagues or with a coach and a pianist. Dancers are often hanging out together; company becomes their second family.

As a conductor, you spend a ton of time alone—score study and preparation require silence and concentration. Then during rehearsals with both dancers and orchestra you feel a weird mix of being both connected and distanced.

Probably a good moment to socialize is after the show, but I am often missing the opportunity—I am running home with or to my 6-year-old son. I shall catch up in the future, I promise. 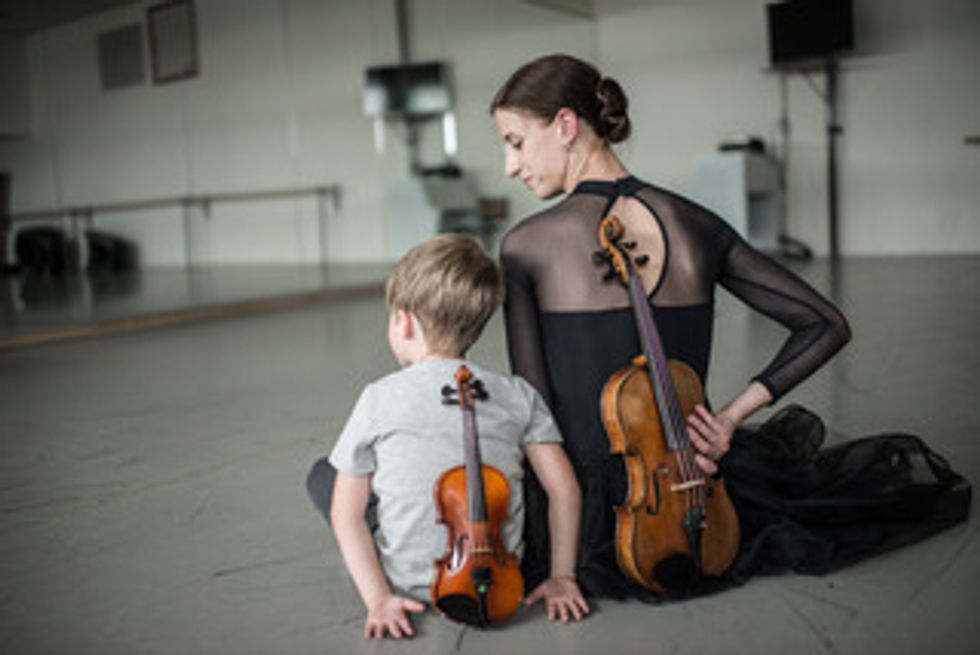 Seletskaya with her son Benjamin

What is the preparation like for a dancer versus as a conductor?

The two processes are so different, that I would rather point at what there is in common: Before the start you have to "warm up" your soul.

Conducting of course has much less impact on the body, than ballet. However the concentration of a conductor during a show or a run-through is immense: One doesn't relax even for a second. After a three-act ballet one's head gets very heavy. (Smiles.)

You said that a certain ballet director once may have had difficulty with you being too inquisitive or forming your own opinions or giving piano lessons to other dancers. Do you have advice for young professionals who may be feeling misunderstood or ostracized?

You know, in the end, when you go home after a long day and go to bed, you remain one to one with yourself, with your thoughts, doubts and desires. In the end, no one's opinion matters, as long as you are being truthful with yourself. Follow your heart and trust it blindly, because deep inside it always knows what's really yours.

Are there some good examples of working relations between dancers and conductors that you have seen?

I have always felt that the conductors who felt for dancers, recognized their hard labor and did not necessarily impose their musical vision were the best to work with. Dancers are incredible masters of their bodies: They can move at any speed and do that with the most glamorous smile. It is very rare that they need to be "pushed." Help them to phrase and play with choreographic text, to do their best on stage, and you will be rewarded with a wonderful collaboration!

Do you ever compose or choreograph?

I have a bachelor's degree in choreography, but I have no urge to compose or choreograph. I am not daring enough and believe that I haven't anything to say what hasn't been said before. I am an executor, not a creator type.

Being new in the company, I felt both cautious interest and pressure and had to work every day to gain trust.

The last ballets I have conducted in Toronto were Balanchine's Chaconne, Kylian's Petite Mort and Lander's Etudes. In the spring I will return for some big classics. There were several big dramatic ballets which I dreamed of dancing but never had a chance to do. I hope I will conduct them all one day.

If you weren't a conductor, what else might strike your fancy as a career?

Since my childhood I am fascinated by space. My dream was to become an astronaut and fly to the ISS. I would become either that or a pilot!

Does your son learn dance and music as well?

When he was 4, he asked to get him "a small violin from the shop because mama's violin is too big for me." According to his teacher, he has some talent and natural musicality. Even though it is not clear, whether or not he will become a musician, violin lessons and practice are a part of our everyday schedule, be it at home or abroad. Just in case.

Related Articles From Your Site
Related Articles Around the Web
maria seletskaya national ballet of canada conductors career transitions
If you like us online, you'll love us in print!
Instagram
Pointe Magazine