The Great Pointe Debate: 3 Approaches to Pointe Training, and the Whys Behind Them

As a pre-professional dancer, you need training that will help you transition as smoothly as possible into the rigorous environment of a professional ballet company. Among other considerations, that means developing strong and seamless pointework. Chances are, you're spending a lot of your classes and rehearsal time in pointe shoes right now.

That said, there are real philosophies behind the role that pointework plays in class. You may be required to wear pointe shoes throughout all of your regular technique classes; or perhaps your studio prefers you to wear flat shoes for barre before putting pointe shoes on for center, or to spend the entire class in ballet slippers, offering separate pointe classes instead. With such differences in training methods, you may feel that you're missing out on something. Luckily, each of these approaches is designed to strengthen you as a dancer—they just accomplish that goal in different ways. Pointe spoke to faculty members at four prestigious ballet academies for added insight into each philosophy.

Save Pointe Shoes for Pointe Class

At Central Pennsylvania Youth Ballet in Carlisle, Pennsylvania, advanced students wear slippers throughout their technique classes. But CPYB school principal Alecia Good-Boresow notes that students are still getting plenty of pointework. "They're in a separate pointe class six days a week," she says. "Then, they'll often have several hours of rehearsal. On Saturdays, they might spend three to five hours in pointe shoes."

So why not wear pointe shoes in technique class? "We want our students to really feel the floor in flat slippers, especially in center exercises," says Good-Boresow. "When you're jumping, you need to learn how to land quietly, rolling through your toes, the ball of your foot and then the heel, while still getting the maximum height of the jump. Also, jumping in pointe shoes can shorten the depth of your plié, and we want dancers to experience the full extent of their demi-plié."

Most of CPYB's pointe classes take place immediately following technique class, so students are already warm. "We believe that putting on pointe shoes with fully warmed-up feet, calves and Achilles tendons helps our students sustain their bodies," Good-Boresow explains. After about a half hour of standard pointe exercises like relevés and échappés at the barre and in the center, the remainder of class is spent doing dancier phrases. "We want students to be able to do anything they'd do in their ballet slippers on pointe." 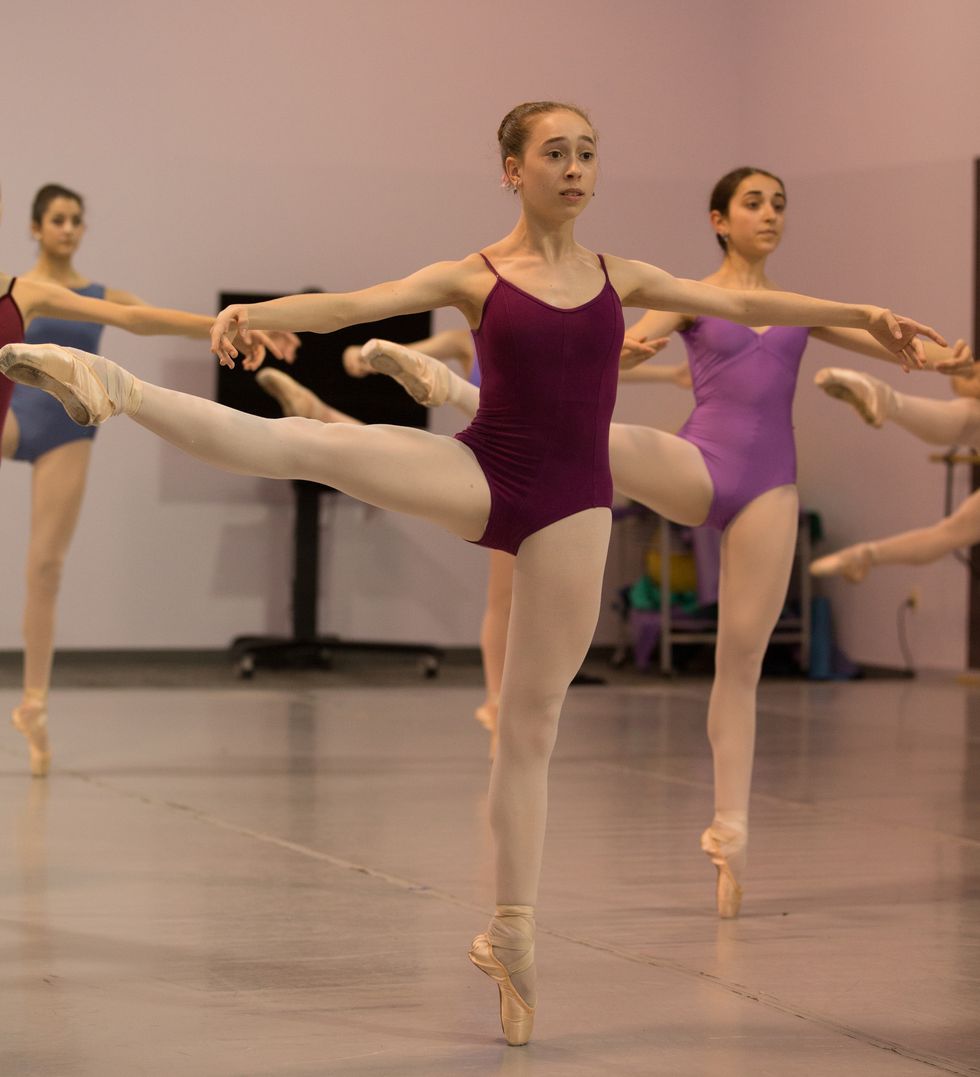 On the opposite end of the spectrum, the School of American Ballet in New York City has students in its advanced level—generally age 15 and up—wear pointe shoes in every technique class, including at the barre. It's a tradition that comes from George Balanchine himself. "Mr. Balanchine wanted our pointe shoes to feel like a second skin," says Kay Mazzo, co-chairman of faculty at SAB and a graduate of the school. "Dancing in them should never feel foreign."

Wearing pointe shoes from the start of class pushes students to develop the same facility they'd have in their flat shoes. That facility is vital when performing Balanchine's repertoire, which is known for its fast, articulate footwork. "To dance Balanchine's ballets, students have to learn how to use their toes and roll through their feet in pointe shoes," Mazzo explains. "We work on gently caressing the floor rather than letting the shoe hit the floor with a bang."

It's important to note that wearing pointe shoes for technique class is not the same as taking a pointe class. Barre exercises at SAB are designed to warm dancers' feet up, rather than to force them into weight-bearing pointework before they're ready. "From the start—tendus, jetés, ronds de jambe—we're working the feet," Mazzo says. Because of this extensive warm-up, she feels that Balanchine training can help students build strength and avoid injury. "Dancing in pointe shoes forces you to pull up and find your balance, even standing on flat," she says. "From barre onward, you're getting stronger and stronger."

There's quite a bit of gray area between these two philosophies. At the Kirov Academy of Ballet in Washington, DC, pre-professional students will often change into pointe shoes for center exercises in addition to their separate pointe classes. "I don't have them on pointe at the beginning of class because they need to warm up every muscle first," says Irina Vakhromeeva, a classical ballet instructor at the school. "The whole body should be ready to go on pointe—not just the feet."

She adds that on certain days, she might not have students wear pointe shoes for center at all. Her decision might depend on the repertoire they're currently rehearsing, as well as on any technique concerns she wants to address, such as rolling in. "If we put our feet in first position, all five toes must be on the floor. Sometimes in pointe shoes it can be hard to feel this." Students are still in pointe shoes for several hours a day, so Vakhromeeva doesn't feel anything is lost by having them take class in slippers.

At Ballet Academy East in New York City, whether or not advanced dancers wear pointe shoes for technique class is often left to the teacher's discretion. "If they don't have a pointe class that day because of rehearsals, we might focus on pointework in center," says Cheryl Yeager, a senior faculty member. "On an individual basis, I might tell a dancer to put her pointe shoes on for center—or to leave them off, if I want to work on something like higher jumps. We don't have a set policy. In general, our advanced dancers know when they should be wearing pointe shoes and when they should take a break. It's fluid, rather than black and white."